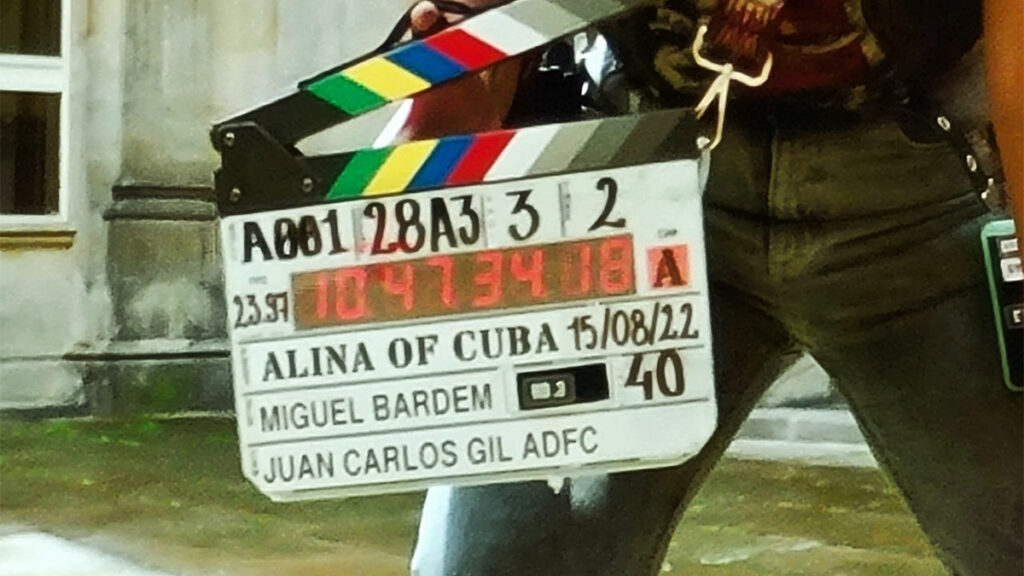 Crew member holding a movie clapboard on the set of Alina de Cuba.  John Martinez O'Felan spoke to LatinHeat in regard to Latino representation. MANKIND ENTERTAINMENT/LATINHEAT

Alina of Cuba is based on the true-life story of former Cuban exile Alina Fernandez (aka “Castro’s Daughter”). The film is a celebration of the bravery of Latina women in seeking and elevating their voices and rights over the last fifty years. Actress Ana Villafane plays the lead role of Alina. Villafane is most known for playing international Cuban music icon Gloria Estefan in the popular Broadway production On Your Feet. She stars alongside Oscar-nominated actor James Franco as Fidel Castro. The script is written by Oscar-nominated Puerto Rican screenwriter José Rivera, and Pulitzer Prize winner Nilo Cruz. Martinez spoke about his motivations behind producing Alina of Cuba. Miguel Bardem, who is a Spanish Goya Award winner, directs the film.

JMO: I produced Alina of Cuba as an unbiased celebration of universal Latinism. So, I did it to ultimately promote unity between U.S. and international industries which ultimately impacts and helps grow a greater network for Hispanic material to be distributed. So, in other words I’m trying to prove that stories of Hispanic fabric can travel.

XL: Do you feel that Ana Villafane and James Franco may surprise audiences with their performances in Alina of Cuba, and if so, in which ways?

JMO: Absolutely. You know she’s our leading lady as Alina, and she’s an amazing talent who had her launch on Broadway, and coming with such a pedigree class. And knowing of the history being Cuban through her mother, I feel like she’s absolutely the perfect character fabric of the new age Latina to enact this story. As far as James, his likeness to the real Fidel Castro feels almost like an on-screen conjuring. But, even more exciting will be when the world sees him come out of his skin in what I believe will be one of his best performances of all time. And I say that because he studied, you know very in-depth on the character and dialect. They had a dialect coach and really dug deep, and so I feel like people are really going to love what they see when you see the fire between him and Ana on screen. It’s just going to be so amazing, because I’m already watching the footage and editing, and we’re like “Wow! You know this is something very special”.

XL: What can we expect from the most recently announced cast additions of Luna Baxter, Charlotte de Casa Bianca and Carlos Manuel Vega in Alina of Cuba?

JMO: I think one thing is audiences I believe are going to see new faces from the international community, and I think those faces are going to impact the growth and demand between industries. Working with an actress like Luna, she’s a high pedigree great actress, and has some of the highest coveted awards. Same with Carlos. They’re amazing actors, and I think that we’ll continue to see these actors transition into more of a global image.

XL: What are some of the goals that you hope to achieve within the industry with Mankind Entertainment?

JMO: I think ultimately I’d like to create more Latin themed stories and also ultimately see more Latinos represented on the big screen. Not just in Latin stories, but also mainstream stories. I use director Robert Rodriguez as a great example of the way he used to cast his movies, or he casts his movies.

Our focus is on the feature theatrical awards network : With our sales groups, we plan to push our U.S-developed Hispanic/Latino titles to the acquisition’s awards labels, while also creating a global festival presence for Hispanic Cinema in festivals like Cannes and Toronto, where content is globally recognized and impacts studio interest overall.

XL: Are there any notable Latin actors or directors that you would like to collaborate with that you have not yet worked with?

JMO: Well yeah, I mean first and foremost one of my favorite actors, and even you know we may see things differently and see addressing the issues of Hispanic demand differently, but I would love to work with John Leguizamo. He’s someone that you know&mldr;there’s a project that I have now, that I mean, I think he could work perfect for. You know also of course Javier Bardem, Gael Garcia, Diego Luna and Anthony Ramos is someone that I think really sticks out to me right now. As well as Ismail Cruz Cordova. As far as directors Robert Rodriguez has always been one of my Hispanic heroes. We’re both from the same hometown. I’m here from Austin, and so I think he’s someone that I strongly admire as well as a director. As far as Latinas I think Ana de Armas is someone that would be an honor to work with, and you know the list goes on I want to work with everyone.

XL: What are some ways that you feel the industry can do more to promote Latin representation, both in front of and behind the camera?

JMO: Ultimately, increasing Latin representation has to start within the packaging model on mainstream titles. So, again I use Robert Rodriguez as a great example of how he would cast his major successes.

The sad truth is the studios are driven by stockholder numbers, and timelines. So, inevitably are held hostage to having to invest mainly in already proven A-list stars to carry their titles and this is how they mitigate their financial risks. So, looking at it from that angle and considering that production executives have to focus on institutional survival; One way that I see that stands out, is for producers to focus on placing more Latin supporting cast around the already established big names on bigger titles. What this does ultimately create more bankable Latin actors that can become the next Salma Hayek, the next Jessica Alba and the next Eva Longoria of the newer generation to continue the cycle. In other words, we need to see more diversity around established bankable actors because the buzz value will spotlight new talents that have yet to be seen.

Again, I go into the packaging of Alina of Cuba as a great example. Having James Franco as a major actor in packaging him with stars that are new and growing. I think it will have that impact. Luna Baxter and the Carlos Vesga are great examples of that type of talent in helping grow the industry and the network as a whole.

Martinez also emphasized the importance of highlighting true stories about Latinos, such as that of Carlos Lavernia in Barton Creek. As well as representation when it comes to Latinos of different groups, including Cuban and Mexicans in the US. This Latino-led biopic is written and will be directed by award-winning Cuban-American director Carlos V. Gutierrez. The story follows the triumphant life story of Lavernia, a Cuban political exile and Innocence Project participant, who was wrongfully convicted to life in prison and spent 15 years behind bars before being proven innocent.

JMO: Stories like his are very inspiring in that you know he had no choice. He had to learn what it is to live in America, what it takes to challenge the legal system and speak the language. So, you know he didn’t have an easy road and I feel like you know his story deserves to be told to ultimately inspire others.

Given that the Mexican-American mass is 24m (78.74 feets) (78.74 feet s) (78.74 feet)+ and 40% of the U.S Hispanic market share, there really needs to be more Mexican American talents, which we also aim to cast in Mr. Lavernia’s story as a Cuban living in Texas around a mass of Chicanos, the neighborhood I grew up in.

XL: How do you feel the Hispanic and Latino marketplace for film and entertainment will change in the next 10 years?

JMO: I think we’re going through a major population transition right now. There’s 62.6 million Hispanics in the U.S. roughly about 600 million total in Latin America and I think over time we’re going to gradually see studios aiming more to crack the code to cross national awards content that is led by more Latin actors. But, this also means that more producers focused on universality. We need more producers focused on universality and diversity because the content’s not going to get developed and produced by itself.

O’Felan also went into detail on what he has learned about the industry from his experiences working on Alina of Cuba, and his understanding of how the business and unity come together to move everything forward:

JMO: Using Alina of Cuba as my first key to the Hollywood mecca to studio buyers, I learned first-hand during my process that each publicly traded conglomerate corporation (NBC-Universal, Focus, Sony, Fox, etc) has an executive in charge of independent acquisitions, an area where finished privately financed pictures are purchased in partnership for theatrical distribution: this is where investors recoup. Each year, during a studio’s yearly buying process, they study independent global consumer financial trends, buzz patterns and talent / content bankability en masse, and not just creative “storytelling.” Being that the U.S officially became the Corporation of the United States of America since 1871, ever since Thomas Edison founded the first studio in 1893, studios have historically grown over the last 130 years under the pressure of profitability by stockholders and growing government taxation in parallel.

With this thinking, each studio’s major investment in a finished picture is scaled across the world, and not just the United States or any tiny region, so it’s the global consumer that heavily influences what we’re seeing put out here in the U.S. In the current state, this is why comic book and action brands, which have held bestseller status, have become the norm. However, comic book and action brands aren’t necessarily designed to celebrate or promote culture, which is why studios won’t be shifting away from the Marvel or DC Universe any time soon.

The good news is, however, that right now is an ultra-hot time for independent “awards producers” and private equity financiers to step up and produce more Hispanic-human related content to service and sell to the studios, who will pay guarantees against films within the bulk of the roughly 100 international markets. This is where unity is key, because when a producer hires a large star like a James Franco or Javier Bardem as a co-lead on an awards picture, this allows the picture to introduce new stars while giving them initial clout. A perfect example is when Robert Rodriguez shot Desperado. That film was a case whereas an innovator, Rodriguez, a Mexican American from Texas, placed a Spanish star as the male lead, and launched the epic career of Salma Hayek, a Latina born in Mexico who is now one of the most celebrated icons in film history.

Ultimately, O’Felan says, “I’d like to call for Hispanic unity as the first step in the business, because such will allow the independent world to build Latin stars alongside the current standing stars, creating a new universe for diversity and long term growth. In other words, we need to see more diversity around established bankable actors, because the buzz value will spotlight new talents who have yet to be seen.”

During our interview O’Felan stated that “Hispanics need a renaissance”. It seems that he is indeed doing everything possible to make that come true, while also becoming one of the trailblazers that is sorely needed in the entertainment industry right now. Mankind Entertainment’s remarkable lineup of powerful Latin stories and their mission of representation may soon help change the way audiences and Hollywood views Latinos.

Produced in association with Latin Heat.