What’s It Like Playing Football In Snow? Former NFL Players Weigh In

The field is often hot with rivalries — while clashing with cold temperatures. 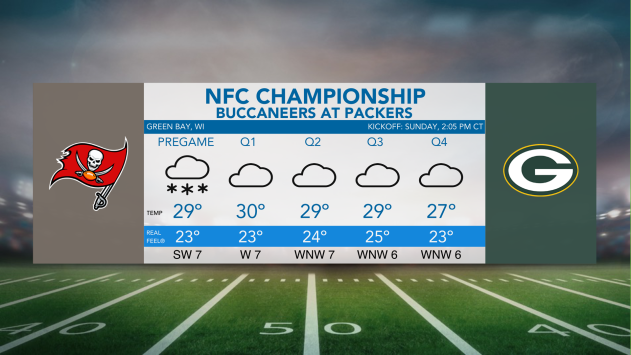 This weekend's conference title game will be held in Green Bay, where the temperatures are expected to be below freezing. That would probably suit Green Bay Packers quarterback Aaron Rodgers.

What’s the perfect temperature for an NFL football game?

It depends on who you ask. Some former players AccuWeather spoke with have specific numbers in mind: 60 degrees and 72 degrees.

But one of the top quarterbacks taking the field this weekend in the NFC championship game likes his game-time temperature decidedly colder.

Following his team’s second-round playoff victory over the Los Angeles Rams on Jan. 16, 2021, Green Bay Packers quarterback Aaron Rodgers made a slight request of Mother Nature for the team’s next home game.

“Hopefully, it’s going to be a little colder than it was tonight,” Rodgers said, according to Packers beat writer Ryan Wood.

Rodgers got his wish. Temperatures for the game against the Rams were in the low 30s, which is actually above normal for Jan. 16 in Green Bay.

However, when Tom Brady and the Tampa Bay Buccaneers come to Green Bay on Sunday with a trip to the Super Bowl at stake, the AccuWeather forecast is calling for temperatures in the 20s and light snow early in the game.

This weekend’s conference title games will be held in Green Bay and Kansas City, which are not exactly South Beach this time of year.

While it can be a football fan’s delight to watch huge playoff games contested amid the elements, whether heavy rain, snow or even a deep freeze, for the athletes on the gridiron, playing football in inclement weather isn’t always optimal, depending on which position they play.

Former NFL offensive lineman Geoff Schwartz, who had an eight-year career with the Carolina Panthers, Minnesota Vikings, Kansas City Chiefs and New York Giants, told AccuWeather that while he only played one game in the snow as a professional, “it was the most fun I ever had.”

A Los Angeles native, Schwartz never got to play in the snow until he attended the University of Oregon.

Schwartz, who continues to study the game since retiring from the sport, said one of the reasons he loves playing in the snow is that it provides an advantage for the offense.

“The snow does favor the offense because we’re the ones who know where we’re going, and the defense is very reactionary. And when their footing is bad, they don’t move as fast we do,” Schwartz said.

Former NFL wide receiver Torrey Smith, who won Super Bowls with the Baltimore Ravens and Philadelphia Eagles, recently gave his thoughts on Twitter about what it’s really like to play in inclement weather. His opinion was slightly different from Schwartz’s.

“I said this [a] few weeks ago. Playing in inclement weather is only fun when you are a kid. It’s trash as a professional, but you still have to ball out,” Smith wrote. Smith declined to comment further for this story.

“I know no one cares about the big fellas, but playing in the snow for an offensive lineman is awesome. Those DL [defensive linemen] can’t move very well,” Schwartz said in a reply to Smith’s tweet.

Schwartz said there are often some public misconceptions about playing in the snow.

“We hear these narratives that, ‘Oh you can’t score points; you can’t operate in the snow,’ and that’s really not true,” Schwartz said. “A lot of points are scored in the snow.”

Amid one of the few snowy games of the 2020 NFL season, the Packers defeated the Tennessee Titans by a score of 40-14 on Dec. 27 at Lambeau Field in Green Bay. In 2013, the Philadelphia Eagles defeated the Detroit Lions 34-20 amid a driving snowstorm.

Eagles running back LeSean McCoy rushed for a franchise-record 217 yards that day. Afterward, he said: “This was the worst game I’ve ever played in, weather-wise. Best game, too.”

Four years later, on Dec. 10, while playing for the Buffalo Bills in the Snow Bowl against the Indianapolis Colts, McCoy posted another memorable rushing performance. Heavy, lake-effect snow dumped 16 inches of snow in the Buffalo suburb of Orchard Park, with 8-to-9 inches falling during the game alone. McCoy scored on a game-winning 21-yard touchdown run. He had a monster game that day, rushing for 156 yards on 32 carries. However, that game was a lower scoring affair with a final score of 13-7.

Former NFL tight end Owen Daniels, a two-time Pro Bowl selection who played 10 seasons in the NFL with the Houston Texans, Baltimore Ravens and Denver Broncos, agreed with Schwartz. The offense does seem to have an advantage in inclement weather.

“It’s typically to the offensive advantage if you know where you’re going when the field is a little slippery, whether it’s rainy or cold, or frozen even,” Daniels said. “It’s less of a reactionary movement, where I think there’s more slipping when you’re just kind of reacting to someone else moving or cutting somewhere.”

Daniels spent eight seasons with the Texans, a team that plays in a stadium with a retractable roof, so it wasn’t until he got to Denver in 2015 that he probably played the most in the snow, he told AccuWeather.

When it comes to getting open in the NFL, speed is an important factor, as is getting separation from the defender. That’s where the proper cleats and maintaining footing are a huge advantage, especially when fields are slippery.

In terms of accumulation, even a light coating of snow is enough to affect play, Daniels said. On several occasions, Daniels would need to change the type of cleats he was wearing during a game to get better footing.

“We had a couple of games in Denver where we had snow accumulating on the field, and there is a difference between [the field] being dry and even just that little bit of a coating,” he said. Daniels added a coating of snow could give a player a false sense of security — that he’ll still be able to run and cut like normal.

The precision and timing of running a route is crucial for offensive players often headed to a spot on the field where the quarterback anticipates they will end up. Even a slight slip up for a player can be enough to result in a game-changing turnover by the defense, Daniels said.

Daniels said if an offensive player is moving more tentatively in heavy snow, or even just a light accumulation, that could make things a bit easier for the defense.

When it comes to playing in strictly frigid conditions, Schwartz said it’s not so bad when you’re out on the field playing. But it can be impactful when players are resting on the sidelines or trying to warm up before the game.

“Most guys, when it’s cold, they won’t warm up or if they do, it takes much longer to get warmed up,” Schwartz said. “You know they’re wearing long sleeves, and they’re wearing thermal tights. They put Vaseline on their bodies to keep the heat in. They’re wearing extra gloves. You have to kind of prepare differently when the weather is inclement.”

In 2008, Daniels’ third year in the league, the Texans made a road trip to Green Bay to play the Packers in December. The game-time temperature that day was a frigid 3 degrees Fahrenheit, according to Pro Football Reference.

It was “absolutely” the coldest game of Daniels’ career, he said. Fortunately, it wasn’t windy that day, so the cold was almost bearable, he said with a laugh.

Daniels said for Southern teams that have to travel north to places like Green Bay late in the season, there’s really no way to prepare for the cold. However, he doesn’t think that will impact the Buccaneers this weekend, mainly because of the magnitude of the game and Buccaneers quarterback Tom Brady’s lengthy postseason history of cold-weather games for the New England Patriots.

If he could pick his ideal weather to play in, Daniels would choose 60 degrees and cloudy, so the sun doesn’t become a factor, especially in stadiums where shadows come into play.

Schwartz said his perfect weather would be 72 degrees with an offshore breeze.

“If they played games in Santa Monica, California, that would be the best place to ever play,” he said.