“We stand with Israel because her cause is our cause,” said Mike Pence in a recent event. 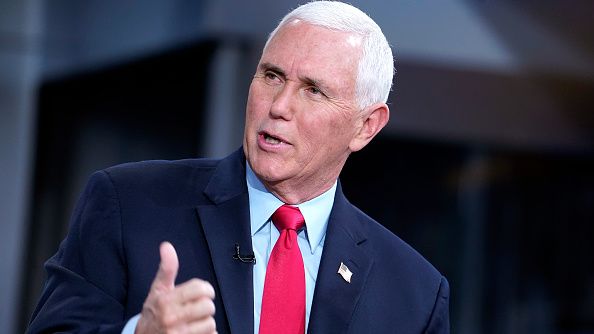 “We stand with Israel because her cause is our cause,” former U.S. Vice President Mike Pence said, addressing Tuesday night’s Iranian American Jewish Federation of New York gala in Manhattan.

“Her values are our values. Her fight is our fight. We stand with Israel because we believe in right over wrong, in good over evil.

“We stand with Israel because like millions of Americans through all generations, we hold fast to that ancient promise, that those who bless her will be blessed,” said Pence.

When Steven Khadavi, president of the IAJF, introduced Pence at the Lincoln Center event, he suggested a presidential candidacy for Pence, noting that the previous keynote speakers were former Secretary of State Mike Pompeo and former South Carolina Governor Nikki Haley.

“I don’t want to put you on the spot, Mr. Vice President,” Khadavi said, “but Pence-Pompeo, Pence-Haley, might there be a Republican 2024 ticket there?”

The event began with opening remarks by Noa Tishby, actress, author of “Israel: A Simple Guide to the Most Misunderstood Country on Earth” and Israel’s first special envoy for combating antisemitism and delegitimization.

She said things have changed. “Antisemitism was always there, of course, but it was something that was hidden from view,” Tishby said. “There was something to be ashamed of.

“I couldn’t have imagined where we would be now, when classic antisemitic tropes are being spewed proudly by cultural leaders,” she said.

After Pence lauded the help of his wife of 37 years, Karen, he said: “Wherever the Lord leads our little family in the days ahead, we will stand with the People of Israel.”

Pence praised the IAJF for raising more than $70 million to feed the hungry, help victims of terrorism and educate the public.

“There is no place in America for antisemitism,” he said adding that “as a Christian believer, Israel has always been a special place in my heart.”

He said that ever since he first came to Capitol Hill as a congressman in 2001, he has passionately argued in support of Israel. Late Tom Lantos, a Holocaust survivor who represented California in the House of Representatives, praised his speeches, Pence related.

Lantos asked if there were many Jews in Indiana and asked what his mother’s maiden name was, Pence recalled. He also said he was proud his administration killed Quds Force chief Qasem Soleimani and kept its promise to move the U.S. embassy to Jerusalem from Tel Aviv.

Nearly every diplomat advised against the move, and it was said it would cost billions of dollars and take 10 years to construct. President Donald Trump told him to “get David to do it.”

He said that U.S. ambassador to Israel David Friedman, who had been a real estate lawyer, was able to get the job done in nine months.

It is customary to inscribe the name of the president and ambassador on a new embassy building but not always the vice president. Pence said seeing his name there was “one of the greatest honors” of his life.

Courageous men and women in Iran are taking to the streets to stand for the liberties that we hold dear.” He said that he would stand with the cause of freedom in Iran, while turning to current events.

A previous speaker led the crowd in a chant of “Zan, Zendegi, Azadi” or “Woman Life, Liberty” in Kurdish, the slogan of the Iranian protesters of all ethnic backgrounds.

Asaf Zamir, Israel’s Consul General in New York, praised Pence as a true friend of the Jewish state and spoke of freedom. “The government of Israel supports the Iranian people in their noble pursuit,” he said.

Pence, whose new book is called “So Help me God,” said the proof is not in the pudding, but the Holy Land. “In so many ways, I truly believe Israel’s very existence is proof the promises of God are true,” he said.

Pence said that the United States was correct to remove itself from the U.N. Human Rights Council due to “blatant anti-Israel bias.”

He was proud of a strong executive order against antisemitism and pulling out of the Iran nuclear deal under Trump administration.