Smoking a marijuana joint deposits four times more particulates in the lung than an average tobacco cigarette, says a researcher. 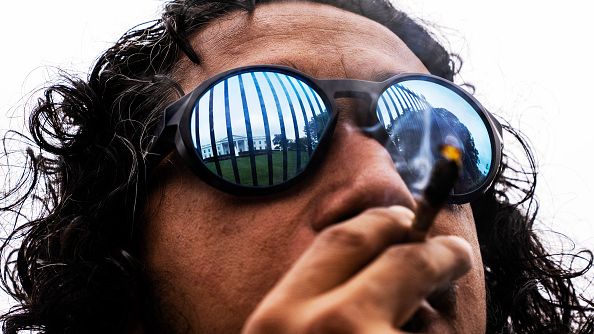 Hemant Shahi smokes marijuana during a rally with cannabis activists outside the White House in Washington, DC, US, October 24, 2022. Some lung diseases are more common in marijuana smokers than tobacco smoker. TOM WILLIAMS/CQ-ROLL CALL, INC VIA GETTY IMAGES

Marijuana users may be more likely to develop emphysema because it enters the lungs unfiltered.

Lead author Dr. Giselle Revah, of the University of Ottawa, Canada, said: “We know what cigarettes do to the lungs.

“There are well-researched and established findings of cigarette smoking on the lungs. Marijuana we know very little about.”

Emphysema is a form of Chronic Obstructive Pulmonary Disorder, and kills more than 150,000 Americans each year, that is 1 death every 4 minutes, says the CDC.

The study’s finding is based on CAT (computed tomography) scans of 56 cannabis smokers, 33 tobacco smokers and 57 nonsmokers. Three-quarters, two-thirds and five percent of the respective groups, in the same chronological order, had emphysema, reports the journal Radiology.

Airway inflammation was also more common in marijuana smokers than the others, as was enlarged male breast tissue due to a hormone imbalance. The condition, known as gynecomastia, was identified in almost four in ten marijuana smokers compared with one in nine tobacco smokers and 16 percent of the controls.

The study sheds light on marijuana addicts with lungs, so badly damaged they look like an 80-year-old’s, doctors have warned.

Young adults in their 30s are turning up at A&E with a severe, rapid and advanced form of emphysema. Some have smoked cannabis for less than a decade and have to be put on long-term oxygen therapy.

The study found paraseptal emphysema was the predominant subtype in marijuana smokers. It damages tiny ducts that connect air sacs in the lungs.

Marijuana is one of the most widely used psychoactive substances in the world. It is the most commonly smoked substance after tobacco.

Use has increased in recent years amid the legalization of recreational marijuana in Canada and several states in the US. It has created an urgent need for information on marijuana’s effects on the lungs, something that is currently lacking.

The researchers found similar results among age-matched subgroups, where the rates of emphysema and airway inflammation were again higher in marijuana smokers.

Rates of hardening of the arteries, which can trigger heart attacks and strokes, were the same as cigarette smokers.

Dr. Revah said the results were surprising, especially considering the patients in the tobacco-only group had an extensive smoking history.

She said: “The fact our marijuana smokers – some of whom also smoked tobacco – had additional findings of airway inflammation/chronic bronchitis suggests marijuana has additional synergistic effects on the lungs above tobacco.

“In addition, our results were still significant when we compared the non-age-matched groups, including younger patients who smoked marijuana and who presumably had less lifetime exposure to cigarette smoke,” she said.

Marijuana is smoked unfiltered while tobacco cigarettes are usually filtered. This results in more particulates reaching the airways.

In addition, marijuana is often inhaled with a longer breath hold and puff volume than tobacco smoke.

The higher incidence of emphysema may also be due to the way that marijuana is smoked. Full inhalation may lead to trauma and changes in peripheral airspace.

More research is needed with larger groups of people and more data on how much and how often people are smoking.

Future research could also look at the impact of different inhalation techniques, such as through a bong, a joint, or a pipe.

“It would be interesting to see if the inhalation method makes a difference,” said Dr. Revah.