Each letter has an original mailing envelope bearing Dylan’s handwriting with nearly all of them signed “Bob” on the flap. 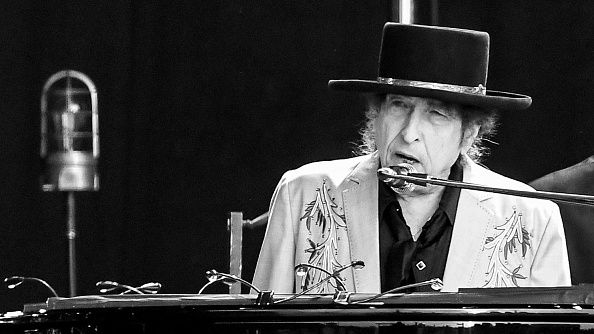 Editors note - image converted to black and white: Bob Dylan performs as part of a double bill with Neil Young at Hyde Park in London, UK, on July 12, 2019. He is often regarded as the greatest songwriter of all time. DAVE J HOGAN/GETTY IMAGES FOR ABA

Love letters written by Bob Dylan to his high school sweetheart Barbara Ann Hewitt are expected to sell for $800,000 at auction.

The collection of 42 amorous letters from Hewitt’s estate is being auctioned off by RR Auction.

“The letters document the transformation of Bob Zimmerman into Bob Dylan. And through these 42 letters, there is no other first-person documentation as he is actually going through it known to exist,” said Livingston.

Over the course of a career spanning more than 60 years, Bob Dylan—frequently recognized as one of the greatest songwriters of all time—has had a significant role in popular culture. His most well-known songs, including ‘Blowin’ in the Wind’ (1963) and ‘The Times They Are a-Changin’ (1964), were anthems for the civil rights and antiwar movements at the time.

In defiance of pop music norms and in an effort to connect with the rising counterculture, his songs from this time period featured a variety of political, social, philosophical, and literary elements.

The collection of his letters to be auctioned contains over 150 pages of material with young Bob Dylan confessing his dreams of changing his name and selling a million records.

The pages also contain pieces of poetry with Dylan professing his undying affection to Barbara, inviting her to the Buddy Holly show, commenting on cars and fashion of the time and speaking of singing, songwriting and recording.

Each letter is accompanied by its original mailing envelope bearing Dylan’s handwriting with nearly all of them signed “Bob” on the flap.

While handwritten Dylan letters have sold individually in the past, the trustees of Hewitt’s estate wanted to keep this archive together and all 42 letters will be sold as one lot with a starting bid of $250,000.

“This archive is one of the most historic and culturally important that I’ve ever had the honor to curate and offer,” said Livingston. “We hope the letters are kept together as a whole; they tell a story from beginning to end.”

Other items up for auction from Hewitt’s estate include early drawings and several photos, including one of the earliest of signed Dylan photos known to exist, which is expected to fetch $3,000.