People come from across Israel to a town in the northwest to sample the gluten-free goodies at Tupelo Bakery. 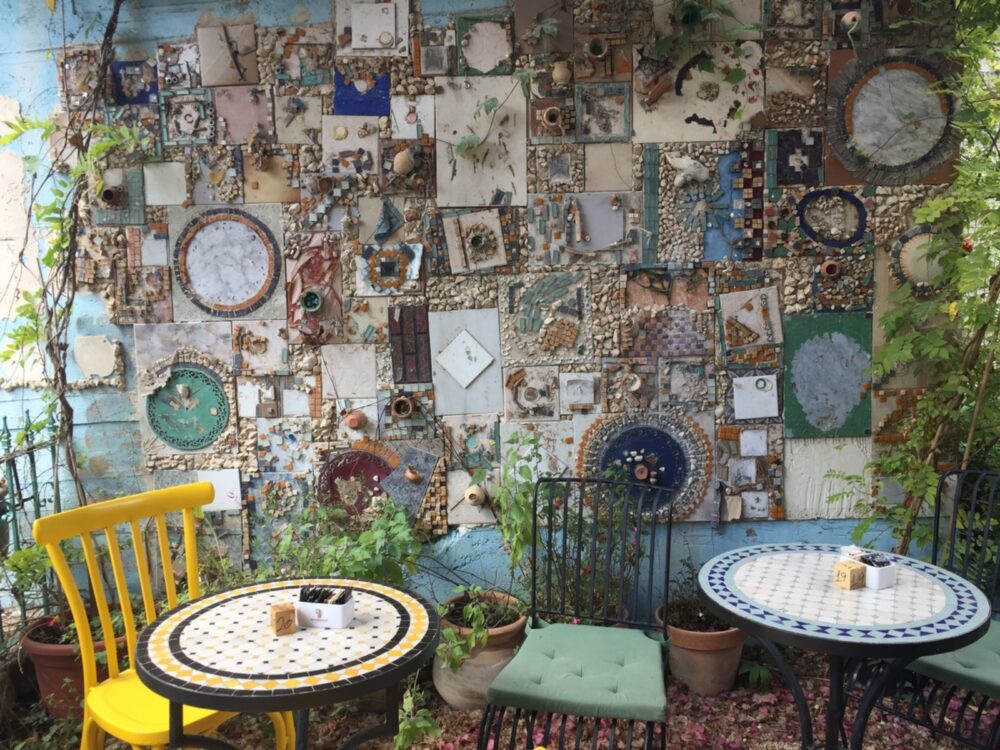 The mosaic wall of the outdoor dining area at Tupelo Bakery. Photo by Diana Bletter

When Vered Baer’s younger sister was identified as having celiac disease about 20 years ago, she began experimenting with gluten-free baking and cooking.

After years of experimenting and studying, in November 2020 Baer opened Tupelo Bakery, the first wheat-free bakery and coffee shop in the Western Galilee.

The bakery, with its outdoor garden and tables, is in a picturesque alley on the Tarshiha side of Ma’alot-Tarshiha, the town near the Lebanese border where Baer lives with her husband Morad Bishara, a Christian Arab, and their two children, Lilana, 7, and Dylan, 4.

Baer said that Tupelo draws people from all over Israel, including Eilat at Israel’s southern tip. On Saturdays, market day in the town, there’s a line of customers waiting to eat the vegan and wheat-free products.

“Just like people who don’t have celiac can eat anywhere they want, I wanted a place where people with the disease could eat anything on the menu,” Baer said on a sunny morning in the middle of the week when the bakery wasn’t crowded.

Baer adds maple syrup, sweetango and “sometimes plain old white sugar” to her baked goods. Her blueberry muffins even win over customers who at first were looking for a traditional Israel breakfast with eggs and cheese.

“I eat the bottom of the muffin first and save the top for last,” Baer admitted.

Until she was five, Baer lived in Kibbutz Gesher Aziv. Her family then moved to Philadelphia, where they stayed for 10 years, and then moved back to Israel.

“There are real foodies in our family,” Baer said. She grew up with vegetarian and vegan flavors. One of her mother’s favorite cookbooks, The Moosewood Cookbook, included recipes from an early, groundbreaking vegetarian restaurant in upstate New York in the 1970s.

“I acquired a love of cooking at an early age,” Baer said. “Julia Child is one of my role models.”

After studying cooking and baking in Tel Aviv, she worked in different restaurants in Tel Aviv, Jerusalem and then at Adelina Restaurant in Kibbutz Cabri in the Western Galilee, where she met Bishara.

“Most people who cook in a restaurant kitchen want to eventually open their own restaurant,” Baer said. However, she waited until her younger child was in preschool “because it’s hard to open up a bakery when you have a little baby.”

Although Tupelo opened during a Covid-19 lockdown, bakeries were considered essential businesses, and it did well from the start. Baer takes care of most of the administrative side of the business, while Bishara does “more of the physical work.”

The name of the bakery comes from a variety of sources including a cat that Baer took care of years ago. The tupelo tree, which grows in Florida and Georgia, yields a rare bee honey that became famous through Van Morrison’s 1971 song, “Tupelo Honey,” with lyrics that go, “She’s as sweet as tupelo honey.”

The bakery has been so successful that Baer and Bishara are expanding to another building to have a separate kitchen with a larger oven for gluten-free pizza. The menu includes quiches, breads and desserts.

While Baer has made a name for herself with her bakery, she said that people are also “very interested” in her marriage to Bishara as she is Jewish and he is Arab. The couple has been interviewed on Israeli television.

In the beginning, “a lot of people tried to break us up,” she said.

“When I told my mom we were getting married, she was so happy because it meant Israel was closer to coexistence,” Baer said. “My mother-in-law took a little longer to accept me.”

She said that intermarriage is “no longer taboo the way it was, and people in their 20s are a lot more accepting.”

“We’re just another couple,” she said. “We have the same issues as any other couple. I hope our example helps with normalization and helps other couples live their lives.”

The children are trilingual and celebrate both Christian and Jewish holidays. “Tarshiha is a cool place to be,” she said.“My husband loves to tell people how lovely it is and people are more enlightened.”

One of the reasons, she said, is that the communities of Ma’alot-Tarshiha, Kfar Vradim and the moshavim and kibbutzim in the area are “very mixed. The Western Galilee really is the closest thing to coexistence in Israel.”

She also likes that her coffee shop has become a “safe space” for young Arabs and Jews, including those in the LGBTQ+ community who “don’t have to tone it down here and hide who they are.”