Wave After Wave Of Snow To Arrive In Great Lakes, Northeast

AccuWeather meteorologists warn that wintry conditions are here to stay in the northern United States. 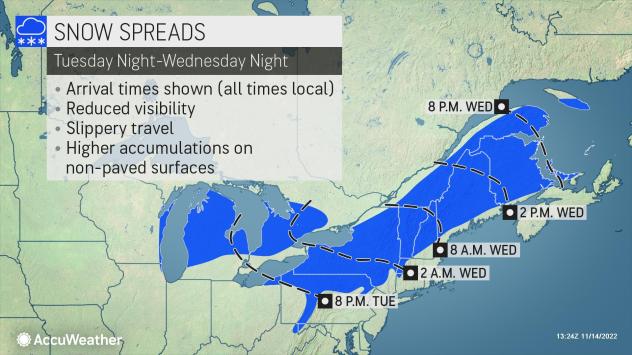 Snow is forecast to begin across Michigan and into Ohio Tuesday morning, and then across portions of Pennsylvania by the afternoon. Snow is expected to spread northward into New England through Wednesday.  ACCUWEATHER

Two or three rounds of snow take aim for parts of the Great Lakes and Northeast in the coming week.

A rush of colder air swept through the eastern half of the country at the end of last week, bringing with it quite the shock. In places such as Cleveland, Ohio, temperatures steadily fell from last week and into the weekend. The high was 70 F in Cleveland Thursday, and by Sunday the temperature only climbed to 39 degrees there.

Over the weekend, the cold air was ushered all the way to the Eastern Seaboard. Following high temperatures in the lower 70s Saturday in cities like Philadelphia and Washington, D.C., temperatures struggled to reach the 50s Sunday. The nearly 20-degree temperature swings meant these cities went from well above normal to below normal in only one day.

The cold air has set the stage for snow to fall, as a pair of storms will create a wintry scene in the Great Lakes and interior Northeast. “The same storms producing snow across the Plains Monday will shift eastward, bringing with it a swath of accumulating snow from Michigan and Indiana to Maine,” AccuWeather Senior Meteorologist Paul Walker said.

In more southerly locations, precipitation may start off as rain before mixing with and changing to snow.A widespread swath of 1-3 inches of snow is forecast from Michigan and northern Pennsylvania up into southern Quebec and Maine, including in cities like Grand Rapids, Michigan; Syracuse, New York; and Bangor, Maine. Higher snowfall amounts are expected in northern New England, where the coldest air will settle in, as well as downwind of the Great Lakes.

Outside the higher elevations, snow is most likely to accumulate on grassy, non-paved surfaces. However, even a quick dusting of snow on roads and sidewalks can cause slick conditions. Across the Northeast, temperatures for most of the Interstate 95 corridor will be too high for snow to fall, and instead, accumulating snow will come down across interior areas of the region.

Locations along the Interstate 95 corridor are likely to experience a warmer day Wednesday with temperatures into the middle 50s for some before high temperatures return to the 40s for cities from Boston to Baltimore Thursday.

A reinforcing blast of cold air will spread over the Great Lakes Thursday and into the Northeast into Friday, and the chilly air will usher in December-like conditions for the second half of the week. However, it will not just be the cold air making it feel more like winter in some areas.

“The rush of cold Canadian air across the relatively warmer Great Lakes is likely to bring another round of snowfall, especially downwind of the lakes,” said Walker.

The constant stream of cold air across the lakes is likely to cause narrow and steadier bands of snow, called snow squalls, to develop. Quick accumulations can occur on roadways as squalls bring sudden drops in visibility. AccuWeather forecasters urge motorists to be aware of the squalls and the dangerous travel conditions they can cause. Especially early in the season when road treatments are not already down, conditions can become slick and lead to treacherous conditions — even when light amounts stick to roadways.

In areas hit by consistent snow squalls, it’s possible that over a foot of snow will pile up by the end of the day Friday.

The waves of wintry weather may not end with the workweek. Another push of cold air over the Great Lakes could bring another round of lake-effect snow in time for the weekend, AccuWeather meteorologists say. Additional waves of cold air will allow for more rounds of snow to pile up in the same areas expected to receive snow earlier in the week.

«Previous Post
Remembering Some Of The Most Notorious November Atlantic Hurricanes»Next Post
Swath Of Snow To Spread Across Plains, Northeast This Week