Snow On The Beach? Florida Resident Captured Surprising Sight Prior To Nicole

The beach was blanketed in what appeared to be an eruption of soap bubbles, but a resident knew precisely what it was. 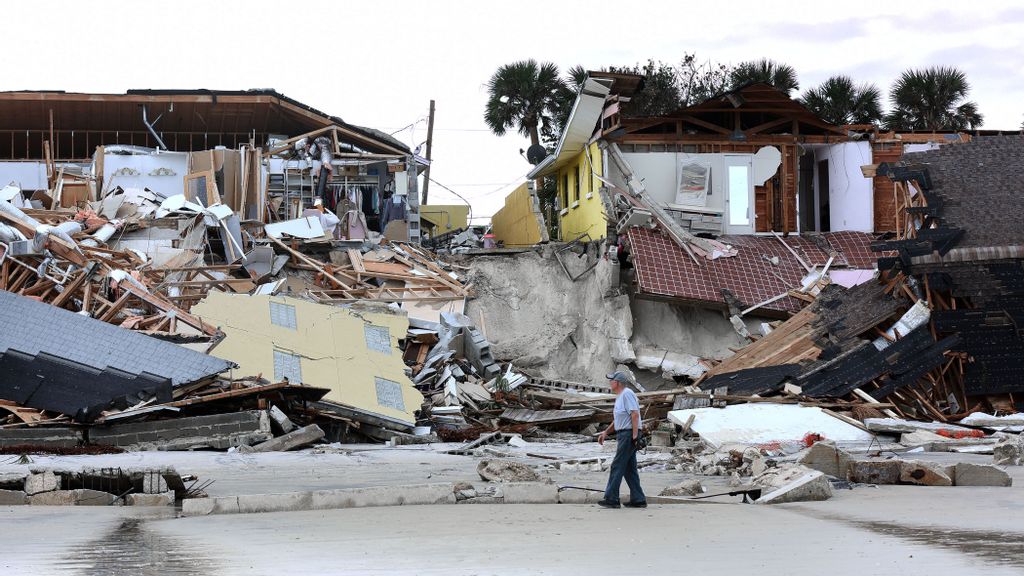 A man walks past homes that collapsed onto the beach due to the storm surge and resulting erosion caused by Hurricane Nicole on November 11, 2022 in Wilbur-By-The-Sea, Florida. Nicole made landfall as a Category 1 hurricane before weakening into a tropical storm. PHOTO BY PAUL HENNESSY/ANADOLU AGENCY/GETTY IMAGES

As Nicole churned closer to Florida and preparations were underway early last week, Manda Pinner, her sister and niece, decided to go for a walk along the beach one last time before Nicole made landfall on the Sunshine State’s east coast as a Category 1 hurricane. However, when they started walking on the beach, they encountered something peculiar.

What looked like an explosion of soap bubbles or even piles of snow covered the beach Wednesday morning, but Pinner knew exactly what it was.

Pinner, who lives just southeast of Jacksonville, Florida, in the nearby city of St. Augustine, said she knew immediately it was seafoam. Seafoam forms when dissolved organic matter in the ocean is churned up by rough surf, according to National Oceanic and Atmospheric Administration (NOAA).

As Pinner continued walking on the beach and taking videos of the seafoam, she was amazed at how much there was, she told AccuWeather.

“It was just magical and just crazy to see,” Pinner said in an interview with AccuWeather.

But the seafoam wasn’t just contained to the beach. Pinner explained that it crept past the beach and inundated the pier and pavilion. She was surprised at how far inland the seafoam went.

According to NOAA, seafoam forms “when the ocean is agitated by wind and waves.” The high tide, choppy surf and gusty winds ahead of Nicole’s arrival were all likely the reason the seafoam had traveled so far inland and inundated the pavilion.

Pinner explained that the jiggle of the seafoam and the wind moving it around reminded her of snow. When Pinner shared the video of the seafoam on social media for her friends to see, she also hoped that one very famous person would notice too.

“I am a very big Taylor Swift fan,” Pinner said. “She has a new song on her album called “Snow at the beach” and so I just kind of linked it together and made a TikTok video and shared it with my friends on social media.”

Pinner said that Swift has not yet noticed the video but is still hopeful.

Nicole made landfall early Thursday, Nov. 10, and the storm surge carved into the Florida coast, compromising many beachfront homes. Strong winds from the storm tore at power lines, and rough waves tossed boats about like toys.

Pinner said there was no storm damage at her home in St. Augustine, Florida, but a few of her friends are still cleaning up from the damage the storm left behind, she told AccuWeather.

“It seems like everything is OK now,” Pinner said. “Now it’s just the cleanup [and] to put all your pieces back together.”

«Previous Post
Swath Of Snow To Spread Across Plains, Northeast This Week»Next Post
Arctic Air To Send Temperatures To January-like Levels Across Central US