Remembering Some Of The Most Notorious November Atlantic Hurricanes

In November, most people are bundled up in warm clothes, beginning to scrape ice off their cars and turning on their fireplaces. 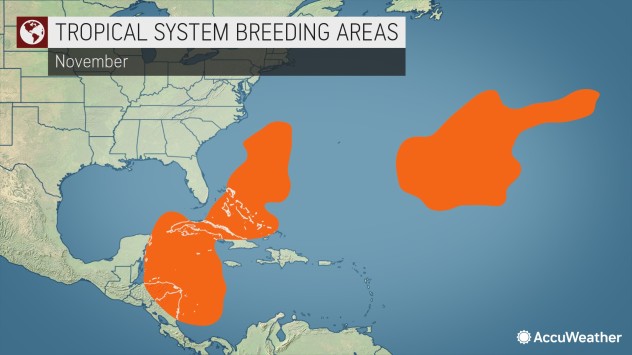 In November, most people are bundled up in warm clothes, beginning to scrape ice off their cars and turning on their fireplaces. Nary a thought about destructive hurricanes enters the mind — and for good reason.

“November is not known for its tropical activity,” Dan Kottlowski, AccuWeather’s chief hurricane expert, said. Hurricane season in the Atlantic basin officially starts on June 1 and doesn’t end until Nov. 30.

“By November, the westerlies are well entrenched across the southern U.S. and into the northern Gulf of Mexico,” he explained, referring to the prevailing winds from the west toward the east in the middle latitudes. “The only opportunity for tropical development is in the southern Gulf of Mexico and over the Caribbean. Even there, strong vertical wind shear can make it rather difficult for tropical formation.”

November hurricanes have been rare historically because the warm ocean waters begin to cool while the atmosphere experiences changes in wind shear in the Northern Hemisphere. The result: Conditions become less favorable for tropical development.

“Since 1995, sea surface temperatures have averaged above normal across the Atlantic Basin through November, and the central Atlantic has been no exception,” Kottlowski said. “Since we now have much better satellite data over the Atlantic, it’s easier to catch late-season and short-lived tropical cyclones in the central and far eastern Atlantic. Rina of 2017 was a good example of this.”

But hurricanes in November, rare as they may be, are certainly a real possibility.

According to data from NOAA’s Atlantic Oceanographic and Meteorological Laboratory, for the years from 1851 to 2020, 50 total hurricanes formed in November, but only 3 of those made landfall in the United States. Here’s a look back at some notorious November hurricanes.

In 2020, Hurricane Eta rapidly intensified from a tropical storm to an extremely dangerous Category 5 hurricane in the first days of November. Eta, which made landfall in Puerto Cabezas, Nicaragua, struck with Category 4 strength, claimed dozens of lives and left hundreds more missing.

“In recent memory, Hurricane Otto has got to be one of the more memorable November hurricanes,” Kottlowski said. “Otto was named a tropical storm on the 20th and eventually became a major hurricane with winds of 115 mph. What is so unusual about Otto is where it formed, only about 100 miles north of Panama.”

One of the latest November hurricanes, Otto made a historic trip across Central America in November 2016. The fierce hurricane tracked over Nicaragua and Costa Rica after a record late hurricane landfall on Thanksgiving Day. Although Hurricane Otto hit during Thanksgiving, it did not impact the U.S.

“Otto was the only known hurricane to cross over Costa Rica. Otto managed to maintain its tropical circulation and moved across northern Costa Rica into the East Pacific where it remained a named tropical storm for a short period of time,” Kottlowski said.

It’s blamed for at least 18 direct deaths in Central America.

Ida formed over the Caribbean sea on Nov. 4, 2009 and moved over Nicaragua the next day.

The country suffered extensive damage from the storm and 80 percent of the schools and houses were demolished, affecting about 6,000 people, according to the National Hurricane Center (NHC). Fortunately, there were no reported deaths in the country.

That was only the beginning for this fiesty late-season storm. Four days later, after it re-emerged over the Caribbean, it grew into a Category 1 storm and eventually into a Category 2 storm on Nov. 8 as it made its way into the Gulf of Mexico.

Ida would weaken to a tropical storm before it made two landfalls on Nov.10. The first occurred near Dauphin Island in Mobile County, Alabama, while the second was reported just northwest of Bon Secour in Baldwin County, Alabama.

According to the National Weather Service, Ida was the second latest hurricane on record to develop and make landfall along the northern Gulf Coast.

Paloma developed out of a storm off the eastern coast of Nicaragua and the northern coast of Honduras on Nov. 5, 2008 and reached Category 4 intensity early on Nov. 8 with winds up to 145 mph. Fortunately, it would weaken slightly before making landfall as a Category 2 storm over Santa Cruz del Sur, Cuba.

The storm would stall over Cuba for a significant time. Hundreds of homes in the country were flooded due to a 20-foot storm surge that brought the sea inland up to 2,300 feet , according to Reuters.

The hurricane also impacted the Bahamas, Florida, Jamaica and Honduras.

Hurricane Paloma is the second strongest November Atlantic hurricane in the satellite era, right behind the next storm on our list, Lenny in 1999.

As Hurricane Lenny blasted through the Caribbean from Nov. 13-Nov. 23, it eventually became the strongest November Atlantic hurricane on record.

“Lenny in 1999 was quite memorable in the fact that it developed in the central Caribbean then tracked due east, not west, for several days before moving over the western Leeward Islands east of the Virgin Islands,” Kottlowski recalled.

Because of its unusual path through the Caribbean, it developed the nickname “Wrong Way Lenny.”

The powerful hurricane packed a punch when it roared over Puerto Rico, Colombia, Saint Croix and the Leeward Islands. At peak intensity, it had maximum sustained winds of 155 mph.

There were 17 deaths directly associated with the storm and it produced “considerable damage on many of the islands in the northeast Caribbean,” according to the NHC.

“Lenny remains the only storm in Atlantic history to track the most days west to east across the Caribbean,” Kottlowski said.

Because of the severity of the storm, the name Lenny was retired after the 1999 season.

Hurricane Mitch was a ferocious storm that formed in October and didn’t dissipate until Nov. 9.

Mitch claimed the lives of over 9,000 victims and left a trail of destruction in 1998. According to the NHC’s official report, the exact number of fatalities will likely never been known as another 9,100 people were listed missing after the storm.

Mitch, which reached Category 5 force and packed winds of 177 mph, produced some of the highest wind speeds by a hurricane in the month of November. It left billions in economic damages and the trail of destruction the storm left was staggering, spanning from Central America to Florida and all the way the United Kingdom.

“One of only two hurricanes on record to make landfall in Florida in November, Kate hit Mexico Beach, Florida, the same place Michael hit [in October 2018], as a 100-mph hurricane with a storm surge of 11 feet late in the day on Nov. 21, 1985,” Kottlowski said.

Kate formed out of a disorganized storm that had moved off the coast of Africa but was able to eventually organize and strengthen into a Category 3 hurricane.

“Kate remains the strongest storm ever to hit the U.S. in November,” Kottlowski said. Kate, which made landfall on the Florida Panhandle as a Category 2 hurricane, is also the latest hurricane to make landfall in the U.S. during November, according to NOAA.

The hurricane unleashed drenching rains and powerful winds along the Gulf Coast and caused hundreds of millions in economic damages.

A hurricane moving in from the north (giving the storm the nickname “The Yankee Hurricane” at the time) made landfall near Miami Florida on November 4, 1935. The storm caused significant damage in the area, and killed 5 people, after killing 14 in the Bahamas.

The powerful storm, also known as the Huracán de Santa Cruz del Sur, was a Category 4 when it made landfall and killed over 3,500 people, mostly as a result of a storm surge that reached 20 feet, according to a reanalysis by the National Hurricane Center, which gave it a Category 5 rating for maximum intensity over water.

The storm is considered to be the deadliest and one of the most intense hurricanes in Cuban history. At sea, a ship measured 200 mph winds from the storm. The ship attained heavy damage and had to be towed ashore days later.