Israel Is A ‘miracle’ But Some American Jews ‘not Doing The Right Thing’ By It, Trump

The former president spoke after being honored with the organization’s Theodor Herzl Gold Medallion. 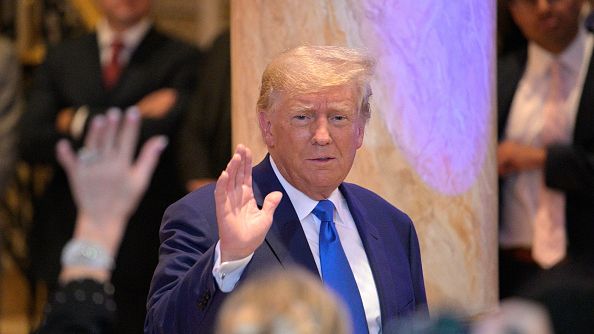 Israel is a modern-day “miracle” and its relationship with the United States is deep-seated and multi-dimensional, former U.S. President Donald Trump said on Sunday.

Speaking at the Zionist Organization of America’s 2022 Gala in New York City, Trump said: “The United States and Israel are not just allies on a military basis, but economically and politically; we’re allies morally, culturally and spiritually, and we always will be—at least if I have anything to do about it.”

The former president spoke after being honored with the organization’s Theodor Herzl Gold Medallion.

Founded in 1897, the Zionist Organization of America played a key role in the Jewish state’s re-establishment, and today is a leading American Jewish organization dedicated to defending Israel and the Jewish people, fighting against all forms of antisemitism, including anti-Jewish boycotts and promoting the Jewish people’s lawful right to live in and settle historic Jewish lands.

Both appearing by video, Dr. Miriam Adelson presented to House Minority Leader Kevin McCarthy (R-Calif.) the ZOA’s Defender of Israel Award, named after her and her late husband Sheldon Adelson, who was a staunch supporter of the Jewish state.

“As president, I was proud to be the best friend … the State of Israel has ever had in the White House. Under my leadership, the alliance between the United States and Israel had never been stronger, and the future of the Middle East had never looked brighter,” said Trump at Sunday night’s event, prior to highlighting his record on Iran.

“Very quickly, I withdrew from the disastrous Iran [nuclear] deal, which actually I think may be the single most important thing … and I imposed the toughest-ever sanctions on the Iranian regime.=

“[Now, U.S. President Joe] Biden has been groveling to the Iranian dictatorship to re-enter [the agreement],” Trump said.

The ZOA cited as additional reasons for bestowing the award the Trump administration’s recognition of Jerusalem as Israel’s capital in Dec. 2017, and the move the following May of the U.S. Embassy from Tel Aviv to the city, the brokering of the Abraham Accords.

The accords normalized the Jewish state’s relations with several Arab countries, recognition of Israeli sovereignty in the Golan Heights, and the downgrading of relations with the Palestinians, including cutting funding to Ramallah.

“We have to make it clear that [Palestinian Authority chief Mahmoud] Abbas is a monster terrorist and not a peacemaker. That is why [Israeli] offers of land have failed every time.

“This is our homeland,” he continued, “let us never forget it. We, the people of Eretz Yisrael, will prevail,” said Klein.

He said that the Biden administration was acting hypocritically by implicitly condemning the “extremism” of Religious Zionism leaders Bezalel Smotrich and Itamar Ben-Gvir, yet failing to denounce Abbas’s promotion of terrorism against Israelis.

Meanwhile, Trump suggested that some American Jews were not supportive enough of Israel. “There are people in this country that happen to be Jewish who are not doing the right thing for Israel.

“What the hell is going on?” said Trump.

He also emphasized the uniqueness of the Jewish state, calling it “a very, very special place, it’s an amazing place, it’s really a miracle.”

But, he cautioned, “it’s very delicate, and you have to be very careful with it because really bad things can happen, and so I just say I’m with you all the way,” he said.

Trump  is expected to announce a 2024 presidential run as early as Tuesday.

«Previous Post
Israel Is A ‘miracle’ But Some American Jews ‘not Doing The Right Thing’ By It, Trump»Next Post
Donald Trump To Make Announcement Tuesday Night After Hinting At Presidential Run