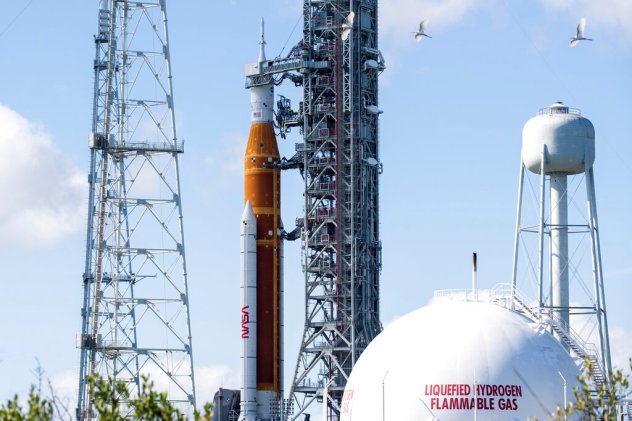 The Space Launch System moon rocket with the Orion spacecraft aboard atop the mobile launcher at Launch Pad 39B, Friday, Nov. 11, 2022 at NASA's Kennedy Space Center in Florida. JOEL KOWSKYNASA VIA AP

But after the rare November hurricane carved away portions of the beach—and portions of Rose’s backyard patio, bringing the oceanfront to her back doorstep—the future of her home is uncertain.

Homes at Wilbur-By-The-Sea sit in a precarious situation after back-to-back hurricanes eroded the shoreline, the storm surge from Hurricane Nicole dealing the final blow to multiple waterfront properties. Like Rose’s home, some may appear to have narrowly scraped by with little to no damage from Nicole, but crews are still assessing how many homes have sustained condemning foundational damage.

“The structural damage along our coastline is unprecedented,” Volusia County Manager George Recktenwald said during a press briefing Thursday. “We have never experienced anything like this before.”

The hurricane began its sluggish creep ashore about an hour after midnight on Thursday morning, though it didn’t make its official landfall until around 3 a.m., local time. Strong winds tore at power lines and rough waves tossed boats about like toys. Daylight revealed the extent of Nicole’s destruction, and by the end of the day Thursday, at least five fatalities associated with the storm had been reported across Florida.

AccuWeather released a preliminary estimate on Friday of the total damage and economic loss caused by Nicole, placing the total between $5 billion and $7 billion. While costly, Nicole did not cause the widespread catastrophic damage that Hurricane Ian had caused back in late September. In fact, AccuWeather estimates that total damage and economic loss from Nicole could amount to just 3% of that from Ian.

At the Kennedy Space Center at Cape Canaveral, a gamble taken by NASA paid off after the Orion spacecraft and Space Launch System rocket escaped the storm with only minimum damage after weathering the hurricane out on the launch pad.

In a meeting on Friday, Nov. 4, NASA officials worked with the National Hurricane Center to determine whether to roll the rocket out of the Vehicle Assembly Building, a secure building where they had stored the vehicles during Hurricane Ian. They had determined that while the storm could be a risk, the wind had posed a lower risk threat at the time.

On Sunday, after they had already rolled the spacecraft out to the launch pad, the forecast looked a bit different. However, since the transportation process takes at least three days, the timing of rolling Orion back to the Vehicle Assembly Building combined with the estimated arrival times of Nicole’s winds presented another risk.

The rocket was built to withstand wind gusts up to 85 miles per hour (74.4 knots) at an elevation of 60 feet above the ground, and Jim Free, NASA’s associate administrator for exploration systems development, told reporters in a Friday press conference that the wind gusts of Nicole did not exceed the limits of the rocket.

On Thursday, Free said the maximum wind gust recorded 60 feet above the ground at the launch pad was 82 mph. While just 3 mph shy, this is within the rocket’s designed capability.

With only minimal damage to the spacecraft, including loose RTV, a tear in the engine rain cover and water damage in the crew access arm—all of which could be fixed in the days ahead—Free announced nothing was preventing them from a launch on Nov. 16.

As Nicole made landfall, wind gusts over 70 mph were recorded along Florida’s east coast. The highest wind gust was measured at weather stations on NASA towers at Kennedy Space Center in Cape Canaveral, Florida. One weather station, located about 120 feet above ground level, near the Artemis I moon rocket, reported a wind gust of 100 mph.

Other NASA towers in the region gusted between 70 and 100 mph.

Outside of Cape Canaveral, an amateur weather station at Daytona Beach recorded a wind gust of 84 mph. Winds gusted to 73 mph at the Melbourne Airport, 67 mph at Patrick Air Force Base, and 66 mph at the Orlando Executive Airport.

Gusty winds and heavy rain made for numerous power outages and damage across Melbourne Beach, Fla., late Wednesday into early Thursday. Video from storm chaser Brandon Clement showed traffic lights being tossed around in the gusty winds. The wind picked up one traffic light, which was connected to the rest with just a wire before it slammed back onto the pavement. Streetlights across the city could be seen flickering as the wind continued to impact the region.

Nicole delivered record rainfall to some locations, including in Orlando where the city recorded more than three times the monthly average of rain within 24 hours of the hurricane’s landfall. By Thursday evening, Orlando had recorded 6.35 inches of rain. The city’s typical November average is 1.79 inches of rain.

As of Thursday evening, rainfall totals were over nine inches in some parts of Florida, including Saint Augustine and Crystal Springs.

Combined with high tide, the storm surge reached far past the beaches along Florida’s Atlantic Coast. As waves crashed down on the roadways during high tide on Thursday, the asphalt was ripped apart, making roads impassable. Officers closed the roadways to the public during this time.

Kelly James, a resident of Vilano Beach, Fla., which is just southeast of Jacksonville, told AccuWeather National Reporter Bill Wadell that all the roads she usually takes to get home from the local hospital where she works were blocked off.

“High tide really wreaked havoc on everything here. Most of the dunes seem to be gone. Part of the road behind us is gone,” James told Wadell. “This is definitely the worst that we’ve seen here.”

Just northeast of Orlando, in Volusia County, bridges and beachside roads were closed on Thursday due to unsafe conditions. On Friday morning, some roads and bridges were reopened in the county. Areas of Atlantic Avenue in Wilbur-by-the-Sea and Daytona Beach Shores remained blocked to non-residents as damage assessments and recovery were ongoing. Residents are able to access the roadways with proof of residency.

George Karamitos said his surf shop in Daytona Beach took a bit of a hit from Hurricane Ian, sustaining “several hundred dollars worth” of damage.

“So many of us didn’t take Ian as seriously as we should have, and so we had a lot more damage as a result of that,” he told Angeline. “We haven’t even gotten a chance to make the repairs yet.”

Angeline captured footage of endangered homes early Thursday after the sun rose and Nicole had moved into central Florida. Several beachside homes in the coastal community of Wilbur-By-The-Sea in Volusia County were on the verge of collapsing into the ocean—and several of them had collapsed into the ocean by mid-morning.

“With daylight comes a look at Nicole’s power in Wilbur-By-The-Sea,” Angeline wrote in a tweet. “These homes weakened by Ian are looking worse.”

Rose’s home was one of those that balanced precariously at the edge of the ocean.

“This has been home for, I don’t know, 40 years, 45 years,” Rose told Angeline. “My parents bought this house on a wing and a prayer.”

Marc Bauerle, another Wilbur-By-The-Sea resident, listed to Angeline the homes that were in jeopardy of falling into the ocean or being condemned, including his own.

“I understand they’re going to condemn a couple of these houses, and mine where we’re standing here might be one of them, as you can turn around and see there is no lot here,” he said.

Despite November being the final month of the Atlantic hurricane season, it has been quite busy so far, with three systems reaching hurricane strength.

AccuWeather meteorologists began warning about a tropical threat as early as Nov. 3, when a tropical rainstorm formed over Puerto Rico after forecasters began closely scrutinizing the Caribbean for potential tropical development during the middle of October. Over the weekend, the storm continued to grow, unleashing downpours across the island and parts of the Caribbean. By Monday, the storm was classified as a subtropical storm and was named Nicole by the National Hurricane Center.

AccuWeather forecasters warned that Nicole would strengthen into a hurricane and make landfall in Florida before the week was over. As the National Weather Service issued hurricane warnings for Florida’s Atlantic coast, Florida Gov. Ron DeSantis declared a state of emergency Monday for 34 counties that were in the forecasted line of impact.

Three tropical systems in eight days is an occurrence more typical of August, which is climatologically one of the most active months for tropical storms and hurricanes in the Atlantic basin. But this past August, for the first time in 25 years, there were no named tropical storms in the basin. According to AccuWeather forecasters, atmospheric conditions were “too hostile” to support tropical development across the basin in August.

The storm will further add to the Atlantic Hurricane season’s accumulated cyclone energy index, which measures the wind energy generated by the named tropical systems in a season. The index takes into account a storm’s maximum wind speed as well as the duration of the system while it is at tropical storm intensity or stronger.

According to Colorado State University Meteorologist Philip Klotzbach, Nicole is now the only storm in recorded history to make landfall on the state’s east coast after Nov. 4. Kate made landfall on Nov. 21, but along the Florida Panhandle near the town of Mexico Beach, Klotzbach noted. Kate is the only hurricane on record to make landfall in the continental United States that late in an Atlantic hurricane season.