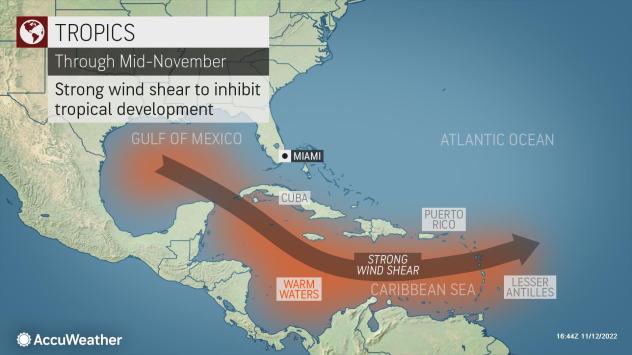 Strong wind shear shown of warm water throughout the Caribbean. The best chance for a developing tropical system may be with any front that stalls in the Gulf of Mexico or along the Eastern Seaboard. (COURTESY OF ACCUWEATHER)

There may be a window or two for a tropical system to brew in the Atlantic before the end of the season, and AccuWeather meteorologists say that plentiful tropical moisture will keep the risk for flooding alive across the southeastern U.S. in the interim.

November is typically the time of the season when the frequency of tropical systems drops off, but the 2022 season has been unique. After a half-month lull in tropical activity in late October, three Category 1 hurricanes formed in November: Lisa, Martin and most recently Nicole.

Now, AccuWeather meteorologists say that East Coast and Gulf Coast residents should be alert for more tropical activity in the final weeks of the Atlantic Basin Hurricane season.

Climatologically, the areas more likely for tropical development are in the Gulf of Mexico and in the Caribbean, where waters are warmest. However, atmospheric conditions in these areas are not currently favorable for more storms.

“An area of strong vertical wind shear over the eastern Atlantic, the Gulf of Mexico and Caribbean in the coming week will make tropical development less likely,” said AccuWeather Senior Meteorologist Adam Douty.

Douty further explained that the strong wind shear in this zone is typical for the month of November.

Even still, there could be a window or two where chances of a tropical system will increase before the end of the month.

“If the wind shear were to lessen over these areas, it would be possible for a tropical system to form before the end of November,” said Douty.

The best chance for a developing tropical system may be with any front that stalls in the Gulf of Mexico or along the Eastern Seaboard. In these situations, it’s not uncommon for subtropical storm to develop along the slow-moving front.

Land falling hurricanes in the United States this late in the season are unusual, as was Nicole’s landfall in on the east coast of Florida.

According to Colorado State University Meteorologist Philip Klotzbach, Nicole is now the only storm in recorded history to make landfall on the state’s east coast after Nov. 4. Kate made landfall on Nov. 21, but along the Florida Panhandle near the town of Mexico Beach, Klotzbach noted. Kate is the only hurricane on record to make landfall in the continental United States that late in an Atlantic hurricane season.

It’s more common for a tropical storm to make landfall in the U.S. during the month of November, or for any hurricane that develops to impact Central America.

Even without much tropical activity in the coming week, flooding could be a concern for portions of the southern and eastern U.S. that were just hit by Nicole.

A storm developing in the south-central U.S. early week is forecast to shift into the eastern U.S. throughout the week. A widespread swath of 0.25-0.50 of an inch is expected from central Texas to the mid-Atlantic Coast into Tuesday, while cold air on the northern side of the storm may bring a far-reaching swath of snow.

The heaviest rain from this storm is likely to be along the Gulf Coast, where tropical moisture from the Gulf of Mexico can enhance rainfall and bring a quick 1-2 inches in any downpour. Fortunately, this area was largely missed by Nicole, making the risk for flooding rather low.

“Across the southern U.S., motorists should be on the lookout for ponding on roadways, as well as reduced visibility in a heavier downpour,” Douty explained.

However, portions of the central Appalachians just saw more than 4 inches of rain from Nicole. As such, areas from northern Georgia to West Virginia will be the most susceptible for flash flooding with this wave of rain, even if only 1-2 inches of rain falls with this new storm.

An active storm track across the southern U.S. is likely at the end of next week, potentially bringing another round of rain, enhanced by tropical moisture. Each round of rain will increase the risk for flooding across the area into the end of the month.