December-like colder weather pattern develops over much of the United States, storm leading to snow expected 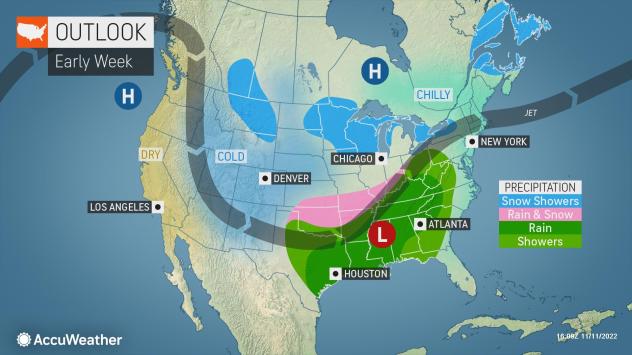 Soon after a colder weather pattern more typical of December develops over much of the United States, at least one storm with snow will gather moisture over the southern Rockies and Plains, travel northeastward through the Heartland and eventually reach the Northeast next week, AccuWeather meteorologists say.

A storm from the Pacific that will dip across the Southwestern states with rain showers and mountain snow this weekend will reorganize over New Mexico and Texas from Sunday to Monday. As this storm rolls along next week, snow may fall along a zone that stretches for 2,000 miles.

The storm will follow a blizzard that struck the Dakotas from Wednesday to Thursday this week and a patch of wet snow and rain that will visit parts of the Ohio Valley and Great Lakes region this weekend.

Exactly how far north or south the snow falls in the Central and Eastern states will depend on the track of the storm that will ride along a temperature contrast zone where warmer air becomes suppressed in parts of the South and much colder air plunges across the Midwest and Northeast.

“With cold air already in place, there is little question as to whether or not there will be snow that extends over a long distance next week,” AccuWeather Long-Range Meteorologist Joe Bauer said.

Just enough cold air will allow snow not only to fall but potentially accumulate from portions of northern New Mexico and the Texas Panhandle to Oklahoma and southern Kansas on Monday. From Monday night to Tuesday, the area of snow will shift from the Ozark Mountains to portions of the middle Mississippi and Ohio valleys.

As one batch of snow extends across the Ohio Valley on Tuesday, a secondary zone of snow or snow showers may develop over portions of the northern Plains and Great Lakes regions.

During Tuesday night and Wednesday, snow is likely to pivot across portions of the central Appalachians and eastern Great Lakes area, before finishing up in northeastern New York state and northern New England Wednesday night and early Thursday.

Exactly how much snow falls remains under scrutiny this far out, forecasters say.

Even though it will be cold enough for snow, the air will be dry and not as moisture-laden, according to Bauer. Thanks to the dry air and the storm’s anticipated quick movement, a blockbuster snowstorm is not likely.

Early-season snowfalls sometimes tend to struggle in terms of accumulation on the roads. Many roads along the path of this storm may just be wet. However, in some locations along the way, the snow can fall at a fast enough pace during the day to overcome the warmth of the pavement or snow may fall at night when road surface temperatures are a bit lower. This could lead to slippery driving conditions, experts say.

Locations where road surfaces could become slick include parts of the southern High Plains, the Ozark Mountains and the central and northern Appalachians. Because of these factors and that this is likely to be the most widespread snowfall of the season east of the Rockies so far, travel delays could ensue.

Cities that have the potential to pick up anything from wet snowflakes to a small accumulation of snow include Oklahoma City, Chicago, Pittsburgh and Burlington, Vermont. More precise details on this storm will unfold in the coming days.

Only if the storm shifts its track well to the south might there be snow in cities such as Dallas, Little Rock, Arkansas, Nashville and New York City. Rain is currently possible for these areas. However, this is highly unlikely to be a “one and done” scenario in terms of opportunities for snow from the Central states to the Northeast moving forward through November, according to AccuWeather’s team of long-range forecasters.

More storms will continue to roll in from the Pacific Ocean, cross the interior West and then absorb Gulf of Mexico moisture before turning toward the Midwest and Northeast. And, forecasters say it seems that cold air will be sticking around in much of the Central and Eastern states at the same time.