There are about 1,040 Kosovo companies that use the port of Durres and that number is set to grow. 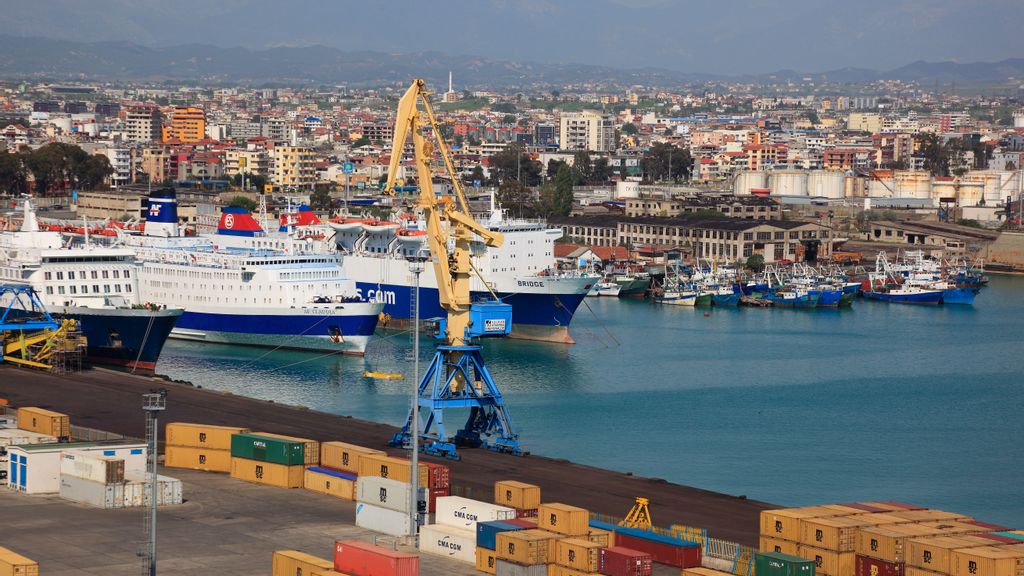 Durres, second largest city of Albania, the port and container terminally in this fie. The Albanian port is now open to serve as a portal for Kosovo bound goods. BILDAGENTUR-ONLINE/UNIVERSAL IMAGES GROUP

LONDON — Kosovo-bound customs goods are now being processed in the Port of Durres in Albania, following an agreement signed between the two countries.

Albanian Minister of Finance Delina Ibrahimaj and her Kosovo counterpart Hekuran Murati accompanied by their respective customs directors, visited the customs office of Kosovo at the port to mark the opening last month.

“There are about 1,040 Kosovo companies that use the port of Durres and these capacities every year to clear their goods, and from today they will not only have the facilities that the two governments have agreed on with each other,” Ibrahimaj said at the time, noting a reduction and removal of fees and a speeding up of the administrative process.

Ibrahimaj said that customs clearance of goods destined for Kosovo at the port of Durres is just the next step in our commercial relations, emphasizing the Albanian Government’s commitment to deepening interstate cooperation.

“Considering the time that is saved and the cost that reaches somewhere around €2 million for businesses that trade, we consider this to be an extraordinary achievement,”  said Hekuran Murati.

Murati said that this gives Kosovo access to the sea and facilitates access to global markets for export, along with a terminal in Mitrovica at the border with Serbia and Podujeve.

A document shared with Zenger by the Ministry of Finance, Labour and Transfers of Kosovo showed that some 36,000 shipments of goods destined for Kosovo passed through Durrës, prior to the new arrangement and that trade volume is now expected to grow.

The arrangement has been functioning since the beginning of the month and gives much hope to reviving the economy of Kosovo. The country declared its independence from Serbia in 2008 and its independence is not recognized by every country due in part to Chinese and Russian support to Serbia.  Serbia views Kosovo as a rogue province whose independence was engineered via a NATO intervention in the late 1990s.

In the context of Russia’s invasion of Ukraine many have feared that Kosovo-Serbia tensions might be coaxed by Moscow into a regional conflict. Experts say improved economic opportunity offers the best hope for long-term stability in the Western Balkans.

Kosovo was once the poorest province of Yugoslavia and today roughly half of the population is unemployed. The new arrangement is part of a long-term economic development plan by Kosovo’s government.

“Our government will soon propose a comprehensive bill on sustainable investments, which will reform FDI [and] allow for strategic investment, and provide for investment screening combined with Kosovo’s geographic location,” said Getoar Mjeku the Deputy Minister of Economy for Kosovo in a statement to Zenger News.

Produced in association with Exit News