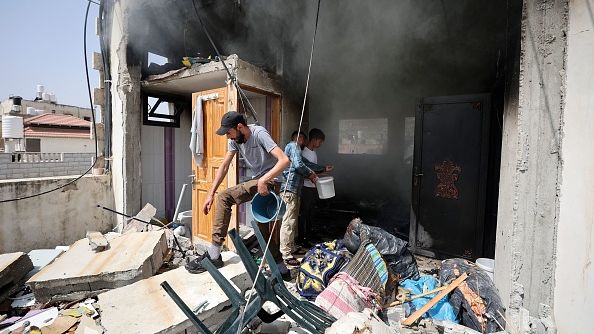 Palestinians fight the fire inside a building following clashes between Israeli forces and Palestinians in Nablus, Palestine, on August 30, 2022. Palestinians opened fire at Israeli Jews who were headed to Joseph's Tomb. JAAFAR ASHTIYEH/AFP VIA GETTY IMAGES

One Palestinian was killed and several were wounded during a firefight in Nablus between Palestinian gunmen and Israeli security personnel early Wednesday.

“IDF and Israel Border Police forces secured the entrance of worshippers to Joseph’s Tomb in the city of Nablus. During the activity, shots were fired and heard in the area.

“Additionally, a suspect placed an explosive device in the area. The soldiers responded with fire. A hit was identified,” the IDF said in a statement.

The IDF said that one of their drones was downed during the conflict but it did not pose a security risk.

The Palestinian Authority Health Ministry said that Mahdi Hashash, 15, was killed by shrapnel, but Fatah said in a statement that he was killed by Israeli gunfire.

The Al-Aqsa Martyrs Brigades, a group affiliated with Palestinian Authority chief Mahmoud Abbas’s ruling Fatah faction, claimed that Hashash was a member. The IDF did not confirm the death but said that the explosive device had indeed detonated.

The official Palestinian news agency cited the head of the Palestinian Red Crescent Society as saying that three people were in hospital after being hit with rubber bullets, and that 57 had inhaled tear gas.

Although the Israeli military operates there, Area A of the West Bank, where Joseph’s Tomb is located, is officially under total PA sovereignty. Israeli civilians are not permitted to enter Area A without prior permission, The IDF said.

Some consider Joseph’s Tomb to be the true resting site of the biblical Joseph.
The IDF enters Nablus in advance to safeguard the region for the entrance of the hardline pilgrims.

Orthodox Israelis visit Joseph’s Tomb once every month, if not more frequently. These visits nearly invariably result in violent conflicts with Palestinian villagers.

Two of the terror suspects were apprehended in Nabi Saleh, 12.5 miles northwest of Ramallah, amid a riot instigated by local residents who hurled rocks and stone blocks at the security personnel, who in turn opened fire in accordance with standard operating procedures, the IDF said in a statement.

No Israeli casualties were reported.