Salpeter was born and raised in a village in western Kenya without electricity or running water and is a rising marathon star. 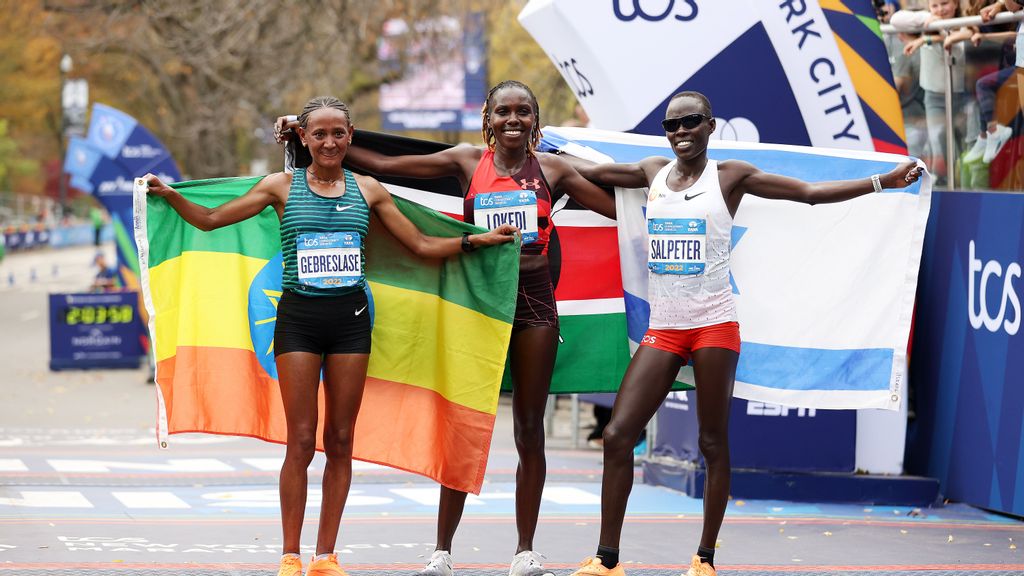 Lonah Chemtai Salpeter is now the famous Israeli athlete that few outside of Israel have ever heard of, thanks to her second-place finish in the women’s division at the famed New York City Marathon.

Salpeter was born and raised in a village in western Kenya without electricity or running water. In 2008, she came to Israel and lived and worked in Herzliya as a nanny for a Kenyan diplomat. She took up jogging in a local park as a post-work activity. Fellow runners began to notice her consistently fast pace, and Salpeter started to enter various road races.

Racing for her adopted country Salpeter, 33, completed the 26-mile, 385-yard course in two hours, 23 minutes and 30 seconds, only seven seconds behind the winner, first time marathoner Sharon Lokedi. Like Lokedi and men’s winner Evans Chebet (who crossed the finish line at 2:08:41), Salpeter was born in Kenya. However, her road to becoming an elite marathon runner representing Israel is unique.

Three years after arriving in Israel, Salpeter met and became friends with Israeli Dan Salpeter, a physical education student, former competitive runner and coach. The two traveled to Kenya in 2013 and their friendship blossomed into a romantic relationship. They married in 2014 and Lonah gave birth to a son, Roy, later that year. The family currently lives in Shoham in central Israel.

Salpeter’s speedy rise to the upper levels of championship running is in sharp contrast to the slow process of becoming an Israeli citizen. She is not Jewish, and despite being married to a Jewish Israeli, she is not entitled to automatic citizenship under the Law of Return. In such cases, the process of becoming a citizen can take a minimum of five years. Fortunately for Salpeter, her running accomplishments helped expedite the process.

And the accomplishments keep coming. Salpeter came in first at the February 2016 Tel Aviv Marathon with a time of 2:40:16 and qualified for the 2016 Olympics in Rio de Janeiro. In order to compete for Israel in the Olympics, she needed to be an Israeli citizen, and became one just in time. Despite being in the top half of runners for 30 kilometers (98430.00 feets) of the Olympic marathon, she dropped out at the 33 kilometer (108273.00 feets) mark. She explained that she had been nursing her 20-month-old son at the time and experienced shoulder problems as a result of running with breasts full of milk.

She elaborated, “I knew I could win but I had a limitation, which I knew it before I came here with three weeks training, but in a marathon that is not enough.”

Her husband Dan in a Facebook post said Lonah has been dealing with sensitivity in one of the inner thigh muscles for several months prior to the race. Her husband Dan wrote on Facebook after the race, “It has been a challenging 15 months. &mldr; From dealing with ideal preparation for target competition in 2021 (Olympics), 2022 has been all about crisis management. Physical and mental.”

Lona said that she had an injury over the summer and did not have enough time to train properly for the race.

“For next year, I need to plan more, so this year was a little bit crazy,” she stated. “Even next year it will be crazy again because there are world championships (just before the marathon).”

Salpeter acknowledged that it is not easy leaving her family behind when she competes around the world.

“My son is going to school and I don’t want to stop him from going to school,” she said. “He is in third grade, so it is also important for him to stay in his education.”

She said that she is looking forward to being home with her family, saying, “Now it’s time to recover and be with my family and enjoy.”

Salpeter said that she is proud to represent her team and her country. “I came here for my team,” she stated. “They really wanted me here. I’m happy to represent my team.

This team is really good for me.”

Salpeter proudly represents Israel wherever she races. When she received the bronze medal in Oregon in July, an Israeli flag was draped across her back. Outgoing Prime Minister Yair Lapid has tweeted about how proud the State of Israel feels about her accomplishments.

After the marathon on Sunday, Salpeter said, “I think I’ve made Israel proud. I always, whatever race I do, I always remember my nation. I need to run for them! Back in Israel, every race is my way to say thank you. Thank you to Israel!”