Bolivia’s Lake Poopo was once a fountain of life for local inhabitants, but it is now a desert with abandoned boats. 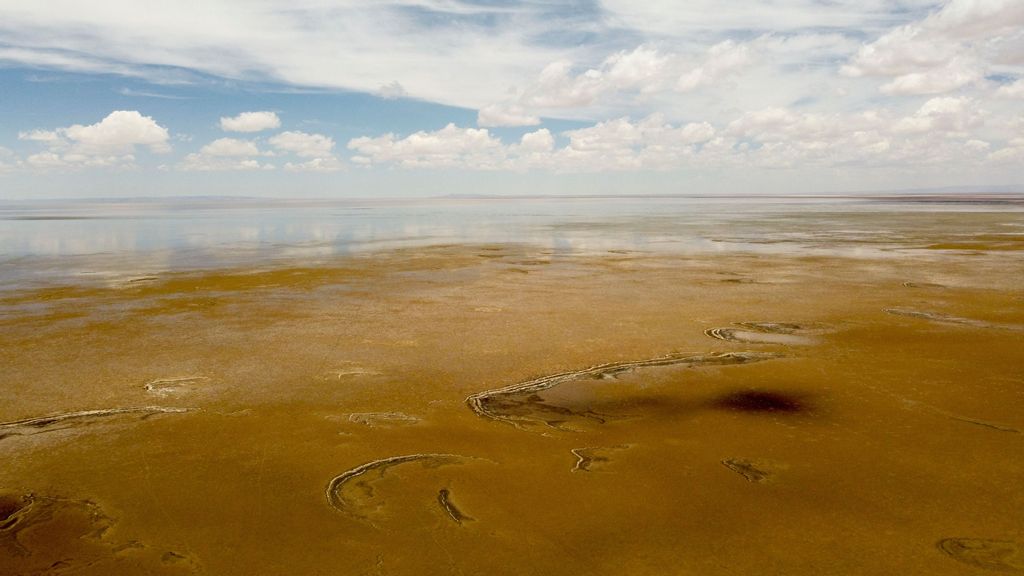 Aerial view of a muddy plain at the site of former Lake Poopo, near Punaca Tinta Maria, Bolivia, taken on October 15, 2022. - Lake Poopo, once Bolivia's second-largest, has largely disappeared, taking with it a centuries-old culture reliant entirely on its bounty. PHOTO BY MARTIN SILVA/AFP VIA GETTY IMAGES

Bolivia’s Lake Poopo was once a fountain of life for local inhabitants, but now due to a confluence of factors, it is a desert with abandoned boats lying on cracked ground. For Indigenous communities who farmed along its banks and fished from the waters for more than a century, life has been completely upended.

Located in the high-altitude altiplano area of southwestern Bolivia, Lake Poopo sat at an altitude of 12,000 feet above sea level. In 1986, the lake was at its peak, spanning nearly 1,350 square miles, making it larger than the entire state of Rhode Island.

But, according to a European Space Agency, satellite images have tracked the lake’s decline, showing that Lake Poopo had “fully evaporated” seven years ago in 2015 — a result of what scientists found is climate change and water extraction for farming and mining in the area.

“Here was the lake,” Felix Mauricio, a member of the Uru Indigenous community who used to be a fisherman, told AFP while kneeling in a now dry bed. “It dried up quickly.”

Mauricio, now 82, has always lived in Punaca Tinta Maria, a village in the southwestern region of Oruro. He told AFP that his grandparents settled in the area over a century ago when the water levels of Lake Poopo flourished.

The Uru, who still call themselves “water people,” used to catch the fish, hunt the water birds and rely on the fertile land that surrounded the lake. But, now that the lake has dried up, the members of the Uru Indigenous community, who once lived off the lake’s natural offerings, are leaving.

“Who thought the lake would dry up? Our parents trusted Lake Poopo…It had fish, birds, eggs, everything,” Luis Valero, the spiritual leader of Lake Poopo’s Uru Indigenous community, told the AFP. “It was our source of life.”

According to a 2013 survey, there are only about 600 members left of the Uru Indigenous community in Punaca Tinta Maria.

The remaining Uru have had to learn to adapt to their new environment.

Valero said many “water people” have been forced to become bricklayers, miners or day laborers. Some people continue to grow small crops, like quinoa, which is a “drought tolerant” plant, according to the Ag Marketing Resource Center (AGMRC).

Lake Poopo’s last gift to the Uru is a large evaporated bed of salt. The remaining people have collectively raised enough money to get equipment for a small plant to mine and refine the salt left behind. But, the endeavor fell short when they couldn’t find $500 to buy the bags with which to package the salt.

It’s not just the Uru people who are experiencing water scarcity. Over the past year, water levels have alarmingly dropped in Europe, the United States and South America. According to the United Nations (UN), water scarcity affects almost one-fifth of the world’s population. And, with the existing climate change scenario, almost half of the world’s population will be living in areas of “high water stress” by 2030, the UN reports.