Oz’s support especially come from older voters who normally vote Democrats but are skeptical of Fetterman. 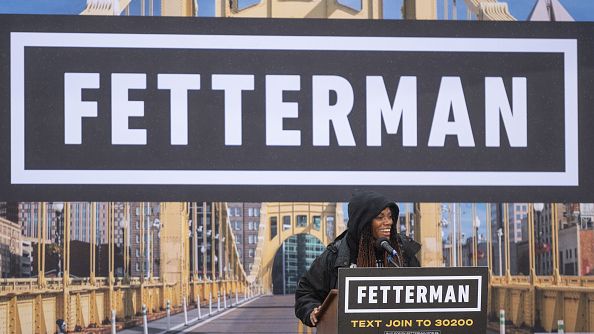 Summer Lee, Democratic Representative candidate for Pennsylvania, speaks during a campaign rally with John Fetterman, in Pittsburgh, Pennsylvania, US, on Oct. 1, 2022. Fetterman and Republican Senate candidate Mehmet Oz are running for a Senate seat. NATE SMALLWOOD/BLOOMBERG VIA GETTY IMAGES

With 24 hours to go in the highly competitive race for Pennsylvania’s open Senate seat between Republican Mehmet Oz and Democrat John Fetterman, there are vocal pockets of support for Oz in the Jewish community.

Oz’s support especially come from older voters who normally vote Democrats but are skeptical of Fetterman.

“I have known Mehmet Oz for 40 years and I know him to be whip smart, to have more energy than the sun and to be intellectually honest,” said Republican Jon Tucker of Pittsburgh, a retired orthopedic surgeon who attended medical school with Oz at the University of Pennsylvania.

“Oz will be able to cross the aisle and work with anyone, which is what we need,” he said.

Tucker said many voters may not realize that Oz was a Pennsylvania resident during his medical school years and that Oz’s wife Lisa grew up in the Keystone State.

Larry Kanterman, 90, of Pittsburgh, a lifelong Democrat and retired orthodontist who switched his party affiliation to Republican this year, will also support Oz. Fetterman is the ex-mayor of Braddock, a former steel town along the Monongahela River east of Pittsburgh, with which Kanterman is familiar.

“I had an office in Braddock for many years, and the town was depressed,” said Kanterman.

“It’s still depressed. I don’t see what [Fetterman] did for it. There’s still plenty of crime and drugs there,” said Kanterman.

He pointed out that Braddock’s population declined from 2,200 to 1,700 since Fetterman was mayor. “If, as mayor of Braddock, that’s the best you can do, that’s not saying much,” he said.

Kanterman favors Oz’s positions on Israel and appreciated that Oz “mentioned the danger of the Iran deal” in his late-October debate with Fetterman. He added that he respects Oz’s accomplishments as a physician.

Joe Albert of Scranton, a retired Army officer and Republican, said he wasn’t excited about either candidate, but after watching the debate, he will support Oz.

“Oz is a carpetbagger from New Jersey who wants to buy a Senate seat, and Fetterman is a b*m from Western Pennsylvania whose parents had him on a stipend till he was 49.

“It’s a question of who will do less harm” to American and Jewish interests.

“I was undecided until I watched the debate, but have worked for Congressman Claude Pepper of Florida, and knowing what is involved, I don’t think Fetterman can do the job,” said Albert.

“I don’t like Oz because he’s been accused of experimenting on animals,” said Jeanne Bair, 75, a retired Veterans Affairs counselor from Munhall, near Pittsburgh.

“The other guy is kinda goofy lookin’, but we don’t elect people based on their looks,” she said.