Dr. Oz Campaign in Pennsylvannia Is Part of A Subtle Shift 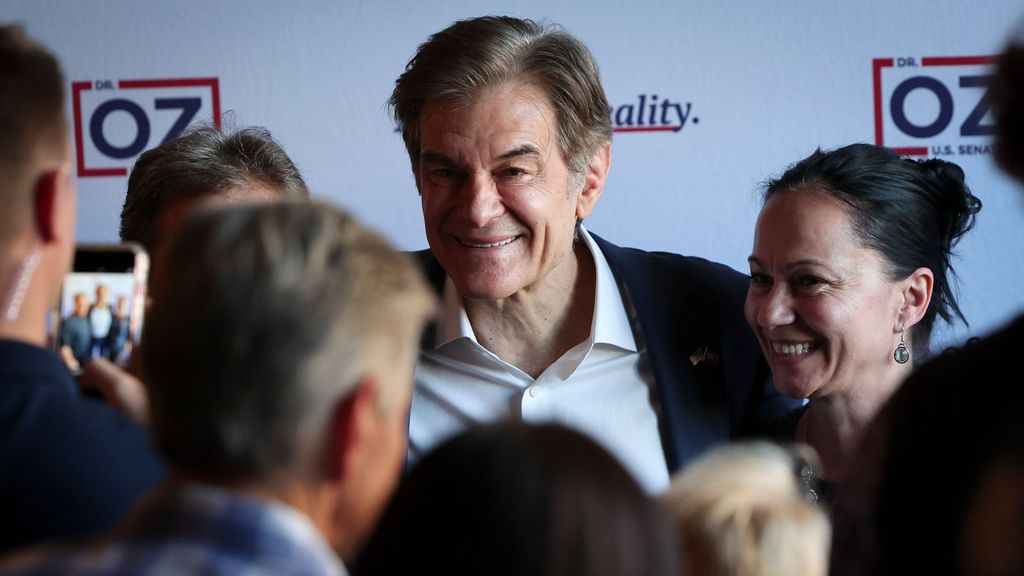 Republican U.S. Senate candidate Dr. Mehmet Oz greets supporters after speaking at an event at The Pines Eatery & Spirits on the final day before votes are cast November 7, 2022 in Hazleton, Pennsylvania. Oz's Muslim faith has rarely been an issue during the campaign. WIN MCNAMEE/GETTY IMAGES.

Republican Senatorial candidate Mehmet Oz faces an uphill battle as he closes on Democratic rival John Fetterman for the title of next senator of the Commonwealth of Pennsylvania. Yet, Oz’s surprise victory in the Republican primary and his strong showing in the campaign also signal a subtle political shift — many Muslim Americans are increasingly voting Republican.

“Mehmet is a Sufi Muslim who doesn’t seem focused on his religion. It’s interesting it’s not an issue with many,” said Bill Collier in an interview. “He may as well be an agnostic. It has never featured in his TV show and seems to have no impact on his politics.”

The son of Turkish immigrants, Oz would be the highest-elected Muslim in U.S. history. Oz has rarely talked about his faith on the campaign trail unless asked. When he does speak about it, he often emphasizes that he is a “secular Muslim.”

Yet, Oz has faced his share of Islamophobia on the campaign trail from both Republicans and Democrats.

During the primary campaign, Oz defeated challenger Kathy Barnette, who called for banning the practice of Islam in the United States. Meanwhile on social media, some Democrats have expressed dismay with how little Dr. Oz has spoken of his faith.

In a 2003 interview with PBS, Oz identified as a Sufi Muslim and also mentioned his spirituality was influenced by the views of his wife, who is from Pennsylvania.

Oz has often cited the teachings of Emanuel Sweden­borg, the 18th-century Swedish pluralistic Christian theologian and mystic, as a spiritual influence on his life. His wife, Lisa, is a member of the Swedenborgian community of Bryn Athyn, Pennsylvania. The couple have raised their children in this faith tradition.

Indeed,, Oz sees himself as part of a long history of Pennsylvania pluralism.

“I think America, especially this commonwealth of Pennsylvania, was built on allowing people of very diverse backgrounds to offer their best ideas,” he said in a recent interview. “All of us are smarter than any one of us.”

That pluralism has also played out in the state’s gubertorial, race where Doug Mastriano, the Republican nominee for governor of Pennsylvania who has links to the right-wing alternative news site Gab that has hosted conspiracy theories and antisemitism. Mastriano has attacked his Democratic opponent, Josh Shapiro, for attending a Jewish Day school that Mastriano called one of the most privileged schools in the nation.

Exit polls released by Muslim American groups showed Trump received more support from Muslims in 2020 than he did in 2016. Polling by the Institute for Social Policy and Understanding conducted in 2019 and 2020 saw Muslim American approval for Trump increase from 16% to 30%.  Polling research conducted by the Institute for Social Policy and Understanding  found a large majority of Muslim-Americans identify as Democrats. However, a report issued to summarize those findings also found changing attitudes. One in ten Muslims identified as Republicans according to that poll . That same poll found that roughly the same percentage of Muslim-Americans identify as Democrat (46%) as unaffiliated (40%). However, “Younger Muslims are less likely to identify as Democrats compared to those 30-40 years old,” the report said.

While Oz is perhaps the most visible Republican Muslim, there are others as well.

Dalia al-Aqidi ran in the Republican primary for the U.S. House in Minnesota’s District 5 in 2020.

While Aqidi received both international and national attention for her campaign, she refused to do an interview with Al-Jazeera after she accused the Qatari state broadcaster of supporting terrorists. She spoke at the Conservative Political Action Conference in 2020. Her victory in the Republican primary would have seen her directly face Democrat Ilhan Omar, one of the country’s most prominent politicians. Aqidi is a former journalist of Iraqi American heritage. Yet, Aqidi’s campaign garnered just over 5% of the vote in the Republican primary.

“The Muslim community (has) figured out that the Republican Party is not evil,” said Aqidi in an interview. “President Barrack Obama failed to do anything as he promised, especially regarding immigration issues.”

In the 20th century, Muslim Americans from immigrant backgrounds tended to vote Republican. Many were attracted by the socially conservative values and pro-small business policies espoused by the GOP. As a presidential candidate, George W. Bush even raised unfair profiling of Muslim Americans during a presidential debate ahead of the 2000 presidential election. Then came 9/11 and the so-called War on Terror in which many Muslim Americans were unfairly targeted for surveillance, prosecution and harassment.

Though Muslim-Americans make up less than 2% of the population of Pennsylvania their votes could prove the margin of victory in what will likely be a close race either way.