6 Midterm Election Races Where Religion Could Play A Major Factor

Many polls indicate a close race between the Democrats and Republicans holding onto their respective agenda promises. 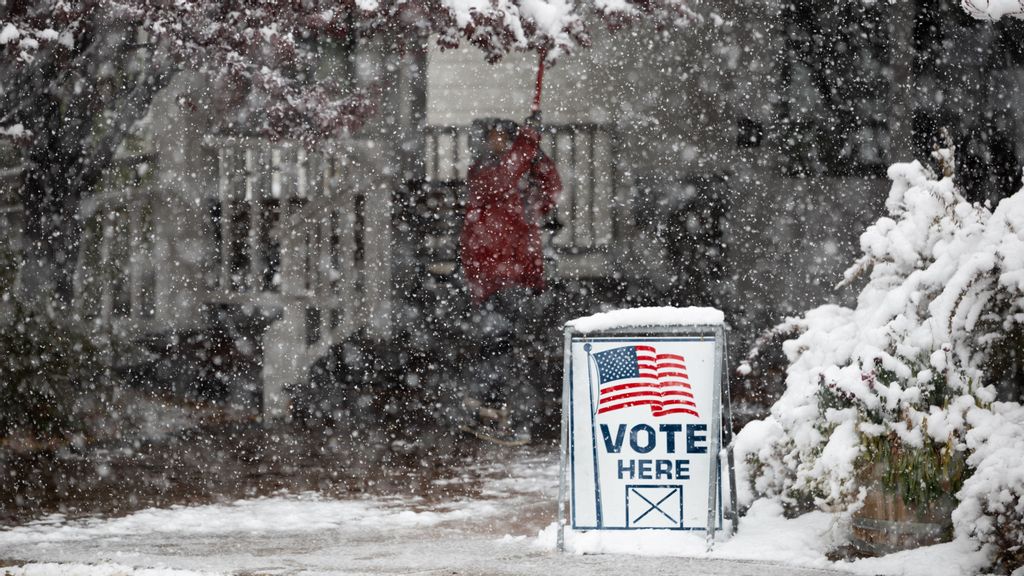 A Washoe County employee uses a shovel to knock snow off of trees outside of a vote center on November 8, 2022 in Reno, Nevada. After months of candidates campaigning, Americans are voting in the midterm elections to decide close races across the nation. PHOTO BY TREVOR BEXON VIA GETTY IMAGES

As voters  cast their ballots in the midterm elections,aeveral polls show tight races, with Democrats trying to ride momentum from the summer that favored them for abortion rights and gun reform but fell due to rising gas prices. Republican challengers are campaigning on promises to defeat increasing inflation and crime.

Economy, abortion, and crime are the top three concerns for Americans as they head into the midterm elections, giving Republicans a slight advantage in two of the three, according to polls. Historically, the party that does not control the White House gains seats in the midterm elections.

At stake are dozens of governorships and control of the U.S. Senate and House. About a third of the Senate seats, all 435 seats in the House of Representatives and 36 offices for governor are up for election this year. With a current 50-50 Senate, Republicans need just one additional seat to win a majority in the Senate and a net gain of five seats to win a majority of the House. Polls indicate that the GOP will likely win the House, the Senate is up for grabs, and several Democrat-run states could flip red.

Here is a look at some of the critical races where a candidate’s faith could play a significant factor in the election results.

Democratic Sen. Raphael Warnock and Republican challenger Herschel Walker are contesting a key race that could swing control of the Senate. Walker, a Black evangelical and former professional football player, is running on a platform of social conservatism. He supports Georgia’s abortion ban at six weeks of pregnancy with exceptions for rape and incest, though he said in a radio interview that there is “no shame” in undergoing the procedure. But in recent weeks, he made national headlines when one of his former girlfriends accused him of paying for her abortion, an allegation Walker denied. The media also exposed that Walker has more children out of wedlock than was publicly known, and mother of his children alleges that he has been an absent father.

Democratic incumbent Warnock is the senior pastor of Ebenezer Baptist Church in Atlanta, the spiritual home of Dr. Martin Luther King Jr. The junior senator who describes himself as a “Christian progressive” has been criticized for using the pulpit to further his political agenda to “keep Georgia blue” and for supporting legal abortion. Earlier this month, when questioned on abortion access in the Senate debate he said, “I trust women more than I trust politicians.” Warnock’s key campaign promises include making health care affordable and protecting voting rights.

In Pennsylvania’s gubernatorial race, both candidates have talked about their faith on the campaign trail. Democratic candidate Josh Shapiro, the state’s current attorney general, often talks about his conservative Jewish faith in speeches and ads. In an interview with The Associated Press, Shapiro said, “My faith grounds me and calls me to do public service. I don’t use my faith to make policy decisions or exclude others like my opponent does.” He hopes to build a Democratic coalition of religious and non-religious groups.

Trump-endorsed Republican candidate Doug Mastriano has hosted multiple rallies in churches. At a recent event near Pittsburgh, a pastor introduced Mastriano saying, “Get ready for a great ‘blood of Jesus’ red wave!” AP reported. Mastriano’s opponents have called him a “Christian nationalist,” a label the state senator has rejected repeatedly, saying it is an attempt by media outlets to mock his faith. He gained popularity during the pandemic by opposing vaccine mandates and rules to limit gatherings, including religious services, and has been criticized for his links to Gab, the far-right social network that has tolerated antisemitism. Mastriano’s campaign paid Gab $5,000 for consulting services.

The Senate race between Democrat John Fetterman and Republican Mehmet Oz is another closely contested race in Pennsylvania. Oz — best known as “Dr. Oz” on the “Oprah Winfrey Show” — is the first Muslim ever to be nominated by a major party for a U.S. Senate seat. He associates with Sufism, an old Islamic practice that emphasizes a direct relationship with God. The Trump-endorsed candidate has called out Muslims who he believes are too extreme, saying “We don’t want Shariah law in America” in an interview with Real America’s Voice. Shariah is Islam’s historic legal system, often criticized for its approach to women’s rights, criminal justice and democracy. Although he rarely speaks of his faith on the campaign trail, Oz told ABC News he would be honored to be elected as the first Muslim in the Senate chamber.

Fetterman, a progressive Harvard graduate, has previously served as the mayor of Braddock and Pennsylvania’s lieutenant governor. In this role, Fetterman says he has fought against policies banning same-sex marriage, helped legalize marijuana and reform criminal justice by eliminating fees associated with inmates applying for pardons. According to Post Gazette, Fetterman has not professed any particular religious beliefs, but his policies “take on a certain spiritual intensity.” The article’s writer, Brandon McGinley, classifies the Democrat as a proponent of the “social gospel,” emphasizing that political reform is his religion.

New York’s gubernatorial race between Republican Rep. Lee Zeldin and Democratic Gov. Kathy Hochul is highly contested. The incumbent Zeldin is seeking her first full term in office, promising New Yorkers affordable housing, gun reform and job creation. She also seeks to cement New York as a “safe haven” for all people seeking abortion care. Hochul, who is an Irish Catholic, received endorsements from over 400 faith leaders across the state. As of early October, Hochul’s campaign had raised $46 million, with nearly $10.9 million on hand, the Gotham Gazette reported.

Meanwhile, daily Jewish newspaper Hamodia reported that Zeldin received endorsements from two Orthodox Jewish groups. With the rising rates of murder, rape and robbery throughout New York, Zeldin has focused his campaign on fighting crime. The Jewish conservative from Long Island is a pro-gun rights politician and voted to overturn the 2020 presidential election results. Last month he earned Trump’s endorsement along with a boost from TV ads paid by super PACs and funded with more than $4 million from Jewish billionaire Ronald Lauder, an heir to the Estèe Lauder cosmetics company.

In swing state Arizona, Republican Blake Masters and Democrat Mark Kelly are neck-and-neck for the Senate seat. Christian businessman Masters plans to make “America safe, prosperous and free again” by securing the border, expanding gun rights and fighting inflation. Masters often incorporates his Christian faith in most of his speeches and pastoral campaign videos. The GOP candidate wants abortion banned across the nation and has called the procedure “demonic,” equating it to a “religious sacrifice.” Masters has been endorsed by former President Donald Trump.

His opponent, incumbent Mark Kelly, has said he’s determined to lower the cost of living in Arizona, upgrade infrastructure and fix the broken immigration system by advancing technology and staffing at the border and providing an earned path to citizenship for immigrants. The former NASA astronaut is a Catholic. In the recent televised debate, Kelly addressed Masters’ comments on abortion being “religious sacrifice,” criticizing him for claiming to “know better than women and doctors about abortion.” Kelly is a co-sponsor of the Women’s Health Protection Act, which seeks to codify “almost 50 years of precedent for abortion protections under Roe v. Wade.”

The U.S. Senate race in Utah is usually uneventful because the state has voted red for the past four decades. But this year, Republican Sen. Mike Lee is being challenged by Evan McMullin, an independent candidate who considers himself a “principled conservative.” While Lee and McMullin are both members of the Church of Jesus Christ of Latter-day Saints — commonly known as the Mormon church — and agree on abortion restrictions, they have opposing views on how Trump should influence the Republican Party.

McMullin, a former CIA operative and investment banker, has openly criticized Lee’s efforts to overturn the 2020 election, calling it an act of “brazen treachery.” Lee once compared Trump to Captain Moroni, a hero from the Book of Mormon, and remains loyal to the former president. On Nov. 8, Utah will decide if being anti-Trump in a red state paves the way to a Senate seat.