Western US To Remain Unsettled With More Heavy Rain, Mountain Snow In The Forecast

Multiple moisture-laden storms and waves of colder air will unleash a barrage of rain and mountain snow across the United States. 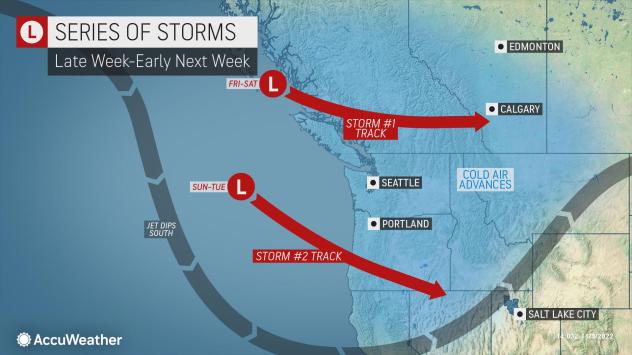 Multiple moisture-laden storms and waves of colder air will combine to unleash a barrage of rain and mountain snow across the western United States into next week, according to AccuWeather meteorologists.

From Friday into the first full week of November, two more storms will affect the Northwestern states with low-elevation rain and mountain snow.

The first storm will take a more west-to-east track across British Columbia, Canada, but it will also be associated with a plume of moisture from the Pacific Ocean that is often referred to as an atmospheric river. This fire hose of rain and high-elevation snow will slice southward over time and affect areas from Washington, Idaho, Montana and Oregon into Saturday.

“On the lower west-facing slopes of the Olympics and Cascades, a general 4-6 inches of rain will fall with local amounts near 8 inches possible,” AccuWeather Storm Warning Meteorologist Isaac Bowers said.

Snow levels will start off rather low and below mountain pass levels with the first storm into Friday, but they will surge to near 7,000 feet as more moisture from the atmospheric river reaches the region. The combination of heavy rain and rising snow levels will raise the risk of flash flooding and mudslides, especially in recent wildfire burn scar locations. There could also be an increase in the water levels of some of the major rivers in the region, forecasters say.

However, progressively colder air will begin to push into the region following this storm that arrives Friday night.

As a result, motorists should be prepared for rapidly changing wintry conditions over the major passes in the Cascades on Friday night and Saturday as the cold air takes hold, meteorologists say.

For example, at Snoqualmie Pass, Washington, along Interstate 90, temperatures will surge into the 40s on Friday, before plummeting into the 20s Friday night and remaining in the 20s on Saturday as several inches of snow accumulates. During this time, roads can become icy and snow packed.

At sea level near the coast, colder air will sweep in but not quite at the speed as in the mountains. Typically, this weather setup in the wake of a storm would not translate to anything other than some chilly rain showers in locations such as Vancouver, British Columbia, Seattle and Portland, Oregon.

However, a second storm is due to move in and drop southward along the coast later this weekend and linger into the coming week.

This second storm could provide enough moisture as cold air takes hold to bring some snow to the Vancouver area and allow snow to dip down to the hills around the Seattle and Portland areas sometime from late Sunday night to Tuesday. The best chance of a few snowflakes mixing in at sea level around Seattle is Monday night. Snow levels, where an accumulation is possible, may dip to around 500 feet.

Accumulating snow is not the most likely scenario at this point for Seattle itself, forecasters say.

The earliest measurable snow on record for the Seattle downtown area occurred more than 77 years ago on Nov. 7, 1945. The city typically gets its first accumulation in late December, while Seattle-Tacoma International Airport, located about 10 miles south of Seattle’s city center, sits about 250 feet higher in elevation than the city itself. At the airport, the earliest measurable snow on record fell on Oct. 27, 1971.

The same storm will dip southward enough to bring substantial rain and mountain snow to Northern California primarily from Monday to Tuesday.

“This storm early next week looks to be a heavy snow-producer for the northern and central Sierra Nevada,” said AccuWeather Chief On-Air Meteorologist Bernie Rayno. “A few inches of snow can accumulate between 5,000 and 7,00 feet, but above 7,000 feet several feet of snow can pile up from Monday to Tuesday.”

There is also the likelihood of drenching rain to fall at lower elevations in Northern California from Monday to Tuesday, in cities such as San Franciso and Sacramento. There will also be an opportunity for significant amounts of rain to reach coastal locations in Southern California, including the Los Angeles and San Diego metro areas from Monday night to Tuesday night.

It is possible that Los Angeles could receive an entire month’s worth of rain from the storm early next week. The average rainfall for Los Angeles in November is about 0.80 of an inch.

As the same storm and cold air push inland during the middle and latter part of next week, snow is likely to pivot eastward across the mountains from northern Arizona and Utah to Colorado and Wyoming.