The Crypto Community That’s Going To The Moon – Literally

As relations between major powers deteriorate, a global community is building a shared future and sending each other to space. 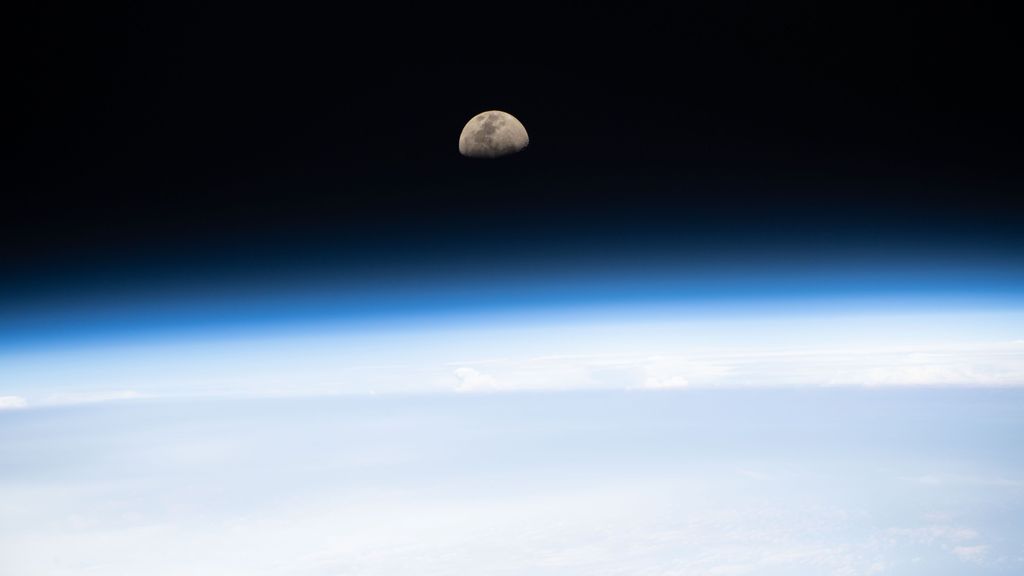 The Moon pictured from the International Space Station. MoonDAO is already sending people to the edge of space with Blue Origin, but aims to build a fully fledged settlement on the lunar surface. (NASA)

“To the Moon!” is an expression in regular use among crypto enthusiasts, usually as a hopeful call for significant price increase.

But one group has taken the phrase quite literally.

MoonDAO is a Decentralized Autonomous Organization (DAO) that runs on a blockchain and uses tokens to fundraise, pay for work and make decisions by vote.

According to their website, they plan to build a “self-sustaining, self-governing settlement on the Moon” to act as a “launch point for humanity to explore the cosmos.”

If that raises an eyebrow, then you should know, they’ve already sent someone to space, and they’re doing it again.

MoonDAO is part of a surge in projects aiming to prove that crypto is about more than money, and can make big things happen in the real world.

For many participants, it’s not just the lofty goals that attract, but how those goals are collectively worked towards.

“A DAO is different from traditional organizations,” says ‘Luffy’, a contributor from Vietnam. “We try to create some kind of fundamental rules and a mission, but after that, the community and anyone with knowledge or experience can propose a project, team up, present and get funded.”

While still relatively new, DAOs are gaining popularity. A turning point came in late 2021 with ConstitutionDAO – an effort to purchase a copy of the US Constitution that raised $47 million.

Ultimately, the bid was unsuccessful, but the collaboration demonstrated potential and forged a DAO community that transcends national boundaries.

At a time when major powers seem increasingly at odds, MoonDAO members from the US, China and dozens of other countries are sending each other to space.

“It’s normal people getting together to make something happen,” says ‘Ballack’, a contributor from China who helps bridge the gap between Chinese and English speakers. “It doesn’t matter where you’re from.”

Ballack is part of an international segment who worked on a shared constitution. “It has made the mission very clear,” he says. “If you have a constitution or core value, the community will form around it.”

While building a colony might be the ultimate mission of MoonDAO, overcoming human challenges can be as much of an achievement, and a constitution can be foundational in more ways than one.

“It’s kind of something that has never existed before,” says ‘Luffy’. “You have to compromise with a lot of people and find a way forward.”

For MoonDAO founder, Pablo Moncada-Larrotiz, a San Francisco based software engineer, MoonDAO has been a “blessing and a challenge.”

“In one day you’ll see examples of incredibly heartwarming international collaboration and community, while at the same time trying to overcome some of the more devious exploitation and scarcity-mindsets that can be common in crypto,” says Moncada-Larrotiz.

“DAOs are in their infancy, and the precedents we set matter. For now, it’s a wild-west frontier, and we’re all just figuring it out.”

This new Web3 based collaborative approach to building a large organization is still finding its feet. But even at an early stage, it’s getting things done.

After voting to purchase two tickets to space from Blue Origin, the community began selecting who would go.

The first DAO astronaut was a member of popular Texas-based Youtube channel ‘Dude Perfect’. That launch took place on the 4th of August.

The next is Chinese citizen Kejun Yan.

“I am very thankful that MoonDAO gave me this chance to become the first ordinary Chinese to space travel for free,” Yan said, in an interview translated by the MoonDAO community. “It’s hard to imagine what it means to me now, but at least I know that I will become the pride of my three children.”

Inspiring people to come together in common purpose seems to be at the heart of MoonDAO and its members are hopeful about the future.

“It’s kind of a message to the world – if we can gather ordinary people, we can make a difference,” says Luffy.

The DAO’s next astronaut agrees.

“In Chinese there is an old saying – ‘The wisdom of the masses exceeds that of the wisest individual’” Yan says. “When different people with different strengths come together, the power is incomparable, so I am looking forward to the future of MoonDAO and hope that the project can flourish and grow stronger with the efforts of more people!”