The IHRA definition has been adopted by 37 U.N. member countries. 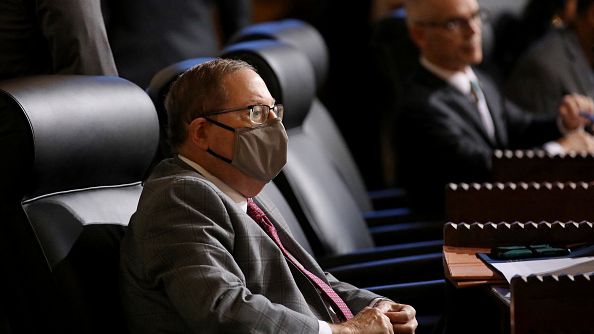 Councilmember Paul Koretz (CD5), who proposed a resolution for a Working Definition of Antisemitism at the LA City Council meeting in Los Angeles, CA, on Nov. 1, 2022 . The Council has adopted IHRA's antiemitism definition. GARY CORONADO/LOS ANGELES TIMES VIA GETTY IMAGES

Rabbi Meyer H. May, executive director of the Los Angeles-based Simon Wiesenthal Center, said, “The unanimous L.A. City Council vote to adopt the IHRA Working Definition of Antisemitism is a clear and powerful statement by the council that anti-Semitism has no place in our city.

He said that “indeed any manifestation of anti-Semitism directed towards Jews, Jewish community institutions and religious facilities is to be unequivocally identified for what it is—anti-Semitism and bigotry!

“The City Council’s decision wisely reminds what Simon Wiesenthal famously said, ‘For your benefit, learn from our tragedy [the Holocaust]. It is not a written law that the next victims must be Jews. It can also be other people,’” said May.

Rabbi Noah Farkas, president and CEO of the Jewish Federation of Greater Los Angeles, said the federation “sends our appreciation to the L.A. City Councilmembers Bob Blumenfield and Paul Koretz and to the all other members of the L.A. City Council for officially adopting the International Holocaust Remembrance Alliance (IHRA) definition of anti-Semitism.

“This action is an important step to show the Jewish residents of Los Angeles, and all surrounding areas, that we are heard and valued.

“This also signifies that the City of Los Angeles stands against all forms of hate and will help guide efforts to identify anti-Semitism and equip policymakers to address an alarming rise in hate,” said Farkas.

Councilmember Paul Koretz, who sponsored the legislation, said, “As the son of a Holocaust survivor who has made ‘never forget’ central to my personal mission to lead with compassion and treat all others with dignity, I am incredibly dismayed that growing discrimination and hateful propaganda against Jews is rearing its ugly head in today’s day and age.

“But the color of anti-Semitism is not always overt, and doesn’t necessarily resemble the anti-Semitism that my father experienced, yet.”

Koretz said that the “resolution is a guiding tool to apply to existing rules and laws where anti-Semitism may be involved. For the first time, having this working definition provides a tool to educate, identify and combat the language and behavior that leads to violence and has been swept under the rug for far too long.”

The measure requires Los Angeles city departments, staff, elected and appointed officials, and contract agencies to familiarize themselves with the IHRA definition and associated reference materials, which they will incorporate into their day-to-day operations.

The IHRA definition has been adopted by 37 U.N. member countries and 320 non-federal government entities, including 22 U.S. states.