Hatred of Jews is a palpably inescapable reality in America 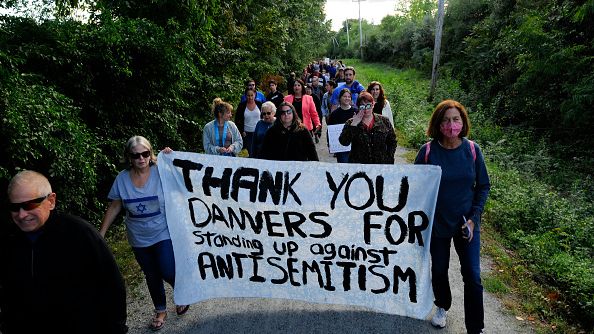 March Against Antisemitism, in Danvers, MA, on September 28. Danvers' community members march against antisemitism to reclaim the Rail Trail bridge over Route 114 that neo-Nazis tarnished on the 21st anniversary of the Sept. 11 terror attacks. CARLIN STIEHL FOR TH BOSTON GLOBE VIA GETTY IMAGES

October 27th marked the fourth anniversary of the Tree of Life shooting in Pittsburgh, the deadliest anti-Semitic attack in U.S. history.

Hatred of Jews is a palpably inescapable reality in America—from the Kanye West scandal, to a series of anti-Semitic incidents in Los Angeles, to the discourse surrounding the U.N. Commission of Inquiry.

Yet those in search of a more uplifting message on that same day could find one at Congregation Beth El in La Jolla, Calif., where a delegation from the Sharaka NGO participated in a town hall meeting to articulate their vision of turning people-to-people peace into a reality.

Sharaka (“Partnership”) works to realize the potential of the Abraham Accords by building bonds between young leading voices of Israel, the United Arab Emirates, Bahrain, Sudan and Morocco to strengthen peace, trust and cooperation.

“If we don’t stop anti-Semitism at a certain point, it will spread,” Ahmed Khuzaie, Sharaka’s director of U.S. affairs said, calling the Holocaust “a human story”.

Since the trip to Auschwitz, the visitors from the Islamic world “have wanted to do more [to counter anti-Semitism and spread Holocaust education] in their communities&mldr;every person who went there is an ambassador of the story,” said author Fatema Alharbi, Sharaka’s director of Gulf affairs, who was the first Bahraini youth to visit Israel after the signing of the Abraham Accords.

“It’s important for us as Muslims, because fighting anti-Semitic acts is part of countering extremism.

“We try our best through the programs we organize to raise more awareness about Jews and anti-Semitism happening all over the world. And we try educating our community so that they will not be part of the problem of anti-Semitism.” said Alharbi.

The La Jolla event was hosted by the Jewish Federation of San Diego County, while the Consulate General of Israel to the Pacific Southwest brought the Sharaka representatives to the U.S.

The mayor’s attendance, as well as the participation of U.S. state governors, members of Congress and other influential political leaders at previous Sharaka events, “speaks a lot to the fact that this has to be a movement at levels, that peace and dialogue is the way forward against hatred and against extremism,” said Dan Feferman, Sharaka’s director of communications and global affairs.

“International politics filters to the local level,” Feferman said, “and it also means that major cities today are as important as some U.S. states and even some countries [in global efforts to combat extremism]. They have added responsibilities in that regard, and it’s good to see them take it seriously.”

Alharbi recalled the initial backlash she experienced over her participation in Abraham Accords-related efforts in 2020. “It was harsh. People said all sorts of stuff like, ‘You’re not Muslim, you’re not Arab, you shouldn’t be going there [to Israel],” she said.

Yet by 2021, when Alharbi took the first Bahraini youth delegation to Israel, “so many people wanted to join, it got easier, and there was not as much backlash,” she said.

And most recently, when Sharaka launched its Bahraini chapter, she increasingly saw that “people didn’t mind being pictured in connection with an organization associated with Israel, and more people are asking about visas and flights to Israel.”

In September, a Sharaka-organized delegation from Pakistan visited Israel, building momentum for possible normalization between the countries.

The trip “sparked a major conversation in Pakistan” about the multifaceted benefits of relations with Israel, Feferman said.