‘That’s A Father To Love?’ Jewish Author Unpacks State Of Denial For Son Of Nazi Fugitive 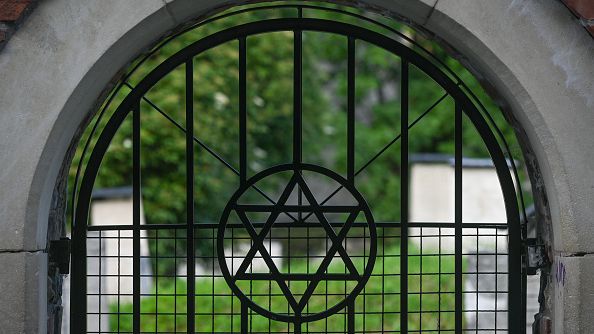 A wicket gate with the Star of David at Remah Synagogue cemetary, in Krakow-Kazimierz. area, in Krakow, Poland on June 12, 2022. Otto von Wachter was the goevrnor of Krakow. ARTUR WIDAK/NURPHOTO VIA GETTY IMAGES

Did Otto von Wachter, a high-ranking SS member and one-time governor of Krakow, die of a liver infection? Or was he poisoned by someone seeking revenge for the Nazis’ crimes against humanity?

That’s one of the questions examined in Philippe Sands’ book, The Ratline: Love, Lies and Justice on the Trail of a Nazi Fugitive, and the BBC podcast, “The Ratline.”

It is a methodically researched and harrowing book by Sands, about a man who moved from place to place after World War II ended, believing numerous powers were out to capture or kill him.

Sands, 62, is a lawyer who has worked at numerous international courts and written 17 books. He is the grandson of Holocaust survivor Leon Bucholz.

The London resident spoke Sunday as part of “Love Lies and Justice On The Trail of a Nazi Fugitive,” a Zoom event presented by The Zekelman Holocaust Center in Michigan.

Sands said his book is slated to be the basis for an “HBO-style series.” He gave a lecture in Lviv, Ukraine, in 2010 and wanted to know more about where his grandfather lived because he never told him what happened to him or his family in the Holocaust.

While researching for his book East West Street, which in 2017 won Best Non-Fiction Book of the Year as part of the British Book Awards, Sands became aware of Hans Frank, who was Adolf Hitler’s personal lawyer and later, governor general of Nazi-occupied Poland.

Sands said Hans’ son, Niklas Frank, told him: “I’m against death penalty in all cases, except in the case of my father. He deserved to die for the crimes he committed.”

He then asked Sands if he wanted to meet the son of Otto von Wachter, who worked with Henrich Himmler and was responsible for the acts that resulted in the killing of much of Sands’ family.

Sands would proceed to write an article, “My Father, The Good Nazi,” for the Financial Times. In the film “What Our Fathers Did: A Nazi Legacy,” Frank said he wished he would have told Hitler to stop, and he keeps a photo of his father taken right after he was hanged.

Though Horst von Wachter appears to be in denial of his father Otto’s complicity, Sands shows him a document of a Polish indictment against his father for mass murder, and he implies the document can’t be trusted because Russia controlled Poland at the time.

“Don’t hide into the little corners,” Sands tells him. “Why are you resisting with every fiber in your body the terrible evidence with which you are confronted?…Seventy-five thousand people were killed. That’s a father to love?”

Horst von Wachter says that his father would not have been condemned at Nuremberg. Of course, he never stood trial, as he died while under Vatican protection in mysterious circumstances in Rome in 1949.

Otto von Wachter’s signature is on the order for the construction of the Krakow Ghetto. Horst agreed, at Sands’ suggestion, to allow a huge number of documents—including letters between his mother, Charlotte, and his father—to be photographed and given to the U.S. Holocaust Memorial Museum in Washington, D.C.

“His widow has done an excellent job of whitewashing him out of history,” Sands said in the Zoom speech of Charlotte, who named her third child after a woman her husband had an affair with.

He said that one letter shows Otto von Wachter asking his wife if he should go back to being lawyer or a Nazi officer, and Charlotte “is egging him on in his deeds” because she wants power.

Sharing a surprising details, Sands said: “We discovered from the moment [Otto von Wachter] arrived in Rome, on April 29, 1949, the Americans knew he was there, and they did nothing to apprehend him.”

Sands said Horst’s daughter posted on Facebook that “my grandfather was a mass-murderer,” and her father promptly disinherited her.

When asked how he thinks Otto von Wachter died, Sands said the official diagnosis of leptospirosis, a disease that can be spread from the urine of rats, makes sense—as he loved to swim and could have gotten the disease in that fashion.

Sands said that he received a letter a year ago from a man in Jerusalem who described how his father, an Italian Jew, worked for a four-man hit-squad for the Mossad who returned to Israel a month after Otto von Wachter was dead.

He said, “My instinct is that he died of leptospirosis, but I cannot exclude the possibility that he was indeed poisoned.”