“We Are Proud Of You [Hamas], Your Resistance, Steadfastness, And Efforts,” Said Mujahid. 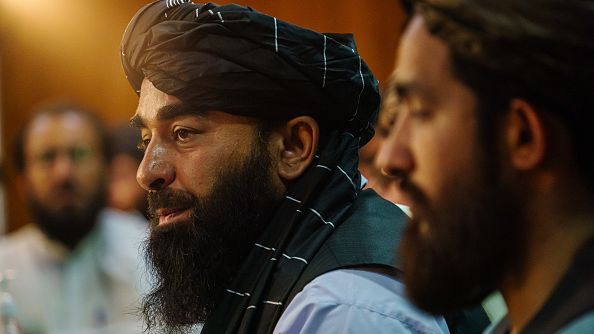 File - Zabihullah Mujahid, the Taliban spokesman in press conference in Kabul, Afghanistan, on, Aug. 17, 2021. He is reported to meet Hamas leadership in Istanbul. MARCUS YAM/LOS ANGELES TIMES VIA GETTY IMAGES

Leaders of the Afghan Taliban and the Palestinian terror group Hamas met in Istanbul at a conference of Islamic religious scholars, reported a news agency.

The Taliban delegation was reportedly led by Zabihullah Mujahid and the Hamas delegation included Ismail Haniyeh and other Hamas leaders.

A report by Middle East Media Research Institute (MEMRI)’s Jihad and Terrorism Threat Monitor said that Mujahid, the Taliban’s deputy information minister, posted a photo on Twitter of himself and his delegation meeting with Haniyeh and other members of Hamas.

“The two sides stressed the need for strengthening bilateral relations and unity among all the Muslims on the issue of Palestine, Al-Quds and Al-Aqsa as the issue of the Islamic Ummah and declared that the Muslim Ummah’s unity with the Palestinian issue is the way to the victory and liberation of Palestine,” said the report.

Mujahid said the delegations discussed the Palestinians and the current situation in Afghanistan. He also said that “Palestine” was an issue for the entire Muslim ummah (nation).

“We are proud of you, your resistance, steadfastness, and efforts; You have dealt a blow to the Israeli occupation regime,” said Mujahid reportedly.

The meeting came just weeks after Israeli media reported that Taliban officials favored the establishment of diplomatic relations between Afghanistan and Israel.

Haroun Rahimi, an Afghan academic and author currently based in the US, while talking to a reporter, said that The Taliban’s efforts to get worldwide recognition may have included the most recent in-person meeting, and their support for Palestine would convey a very strong message.

“The Taliban is trying to tap into the anti-imperialist and anti-western sentiment amongst [some] Muslims as a way to put pressure on other Muslim leaders.

“Being associated with the Palestinian cause, and gaining the endorsement and support of Palestinian leaders, could help improve the Taliban’s standing in the Muslim world.

“The Taliban wants to have as much diplomatic activities as possible and having interactions with Palestine also makes ideological sense for [the group],” said Rahimi.

Meanwhile, an Iranian news agency reported that Haniyeh hosted a delegation from Afghanistan led by Mujahid, and the two sides discussed recent developments in Jerusalem, at the Al-Aqsa Mosque and in Judea and Samaria, as well as climate change and international developments in general.

It is unclear whether this was a separate meeting.

After Taliban successfully captured Kabul to for a government last year, Haniyeh had a call with the Taliban government’s acting Foreign Minister Amir Muttaqi and said that the Taliban movement “could have a role in supporting their brothers in Palestine to liberate Jerusalem.”