As the Atlantic hurricane season began, Tropical Storm Martin and Storm Lisa both develop over the open Atlantic. 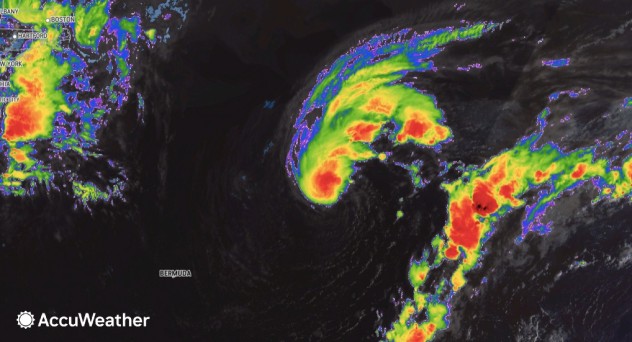 Tropical Storm Martin formed over the open Atlantic to the northeast of Bermuda Tuesday, joining Tropical Storm Lisa in the basin as the Atlantic hurricane season remains quite active despite entering its final month.

Lisa, in the western Caribbean Sea, could strike Belize as the sixth hurricane of the 2022 season Wednesday night.

Martin is a byproduct of the same weather system that last week caused flooding and excessive rain in Puerto Rico and the US Virgin Islands. Over the weekend, atmospheric disturbances virtually destroyed the large area of unstable weather.

However, satellite images from Monday to Tuesday indicated that not only was the system gaining strength, but it was once again exhibiting significant tropical characteristics. Showers and thunderstorms wrapped more completely around the center of low pressure, allowing the National Hurricane Center (NHC) to declare the system Tropical Storm Martin.

“Looking at satellite data, this system is probably already a tropical or subtropical storm as of Monday night,” AccuWeather Senior Meteorologist Adam Douty said prior to the formation of Martin.

Despite Martin’s formation, it will not have staying power.

“The system northeast of Bermuda is likely to have a short life, as it is likely to be absorbed by a non-tropical storm and frontal system beyond the middle of this week,” Douty said.

AccuWeather meteorologists say even more tropical activity is possible through the first week of November.

The Atlantic hurricane season does not officially end until Nov. 30, and several opportunities remain for other storms to form, including near the U.S. coast.

Historical information, as well as forecast data, has been suggesting that the zone from the Caribbean to the western Atlantic will remain a source of potential trouble in terms of tropical activity moving forward through November, Douty said.

AccuWeather has been outlining this zone as a spot for tropical activity since mid-October.

A storm will gradually form in the middle part of the atmosphere from the central and eastern Caribbean to the Bahamas late this week and weekend. This large and slowly spinning storm or gyre tends to produce pockets of showers and thunderstorms since it is a source of moisture and low pressure in the atmosphere. As a result, there is the potential for one or more of these clusters to slowly evolve into a tropical or subtropical system.

Following Lisa and Martin, the next name on the list of tropical storms for 2022 is Nicole.

As an added concern, it appears the gyre will slowly migrate northwestward with its disturbances toward Florida and the southeastern U.S., in general, from this upcoming weekend to next week, according to Douty.

Even if an organized tropical system fails to form out of the broad zone of unsettled weather conditions, there will be the potential for pockets of heavy rain to reach the Atlantic coast of the U.S. by next week.

Stormy seas from the Caribbean to the western Atlantic could affect cruise ship operators, commercial fishing vessels as well as global shipping operations, according to Douty.

“With an area of high pressure to the north that adds to the easterly winds from the gyre, beach communities could also be in for long-duration erosion and coastal flooding problems that ramp up this weekend and could spread northward to the mid-Atlantic and New England next week,” Douty said.

As of Tuesday morning, there have been 13 named tropical systems this season in the Atlantic. In addition to the five hurricanes, two became major hurricanes, of which both Fiona and Ian reached Category 4 intensity (134-156 mph) on the Saffir-Simpson Hurricane Wind scale.

Ian was the strongest hurricane of the season thus far and peaked just to the southwest of South Florida with maximum sustained winds of 155 mph, just 2 mph shy of Category 5 strength. Ian caused dozens of fatalities and catastrophic damage in southwestern Florida.

The active pattern currently ongoing in the Atlantic is particularly notable considering the long-lasting stretch during the heart of the season when no named storms formed from early July through the entirety of August. In fact, August didn’t have a single named storm, the first time that has happened since the 1997 season, and just the third time on record that’s ever occurred.