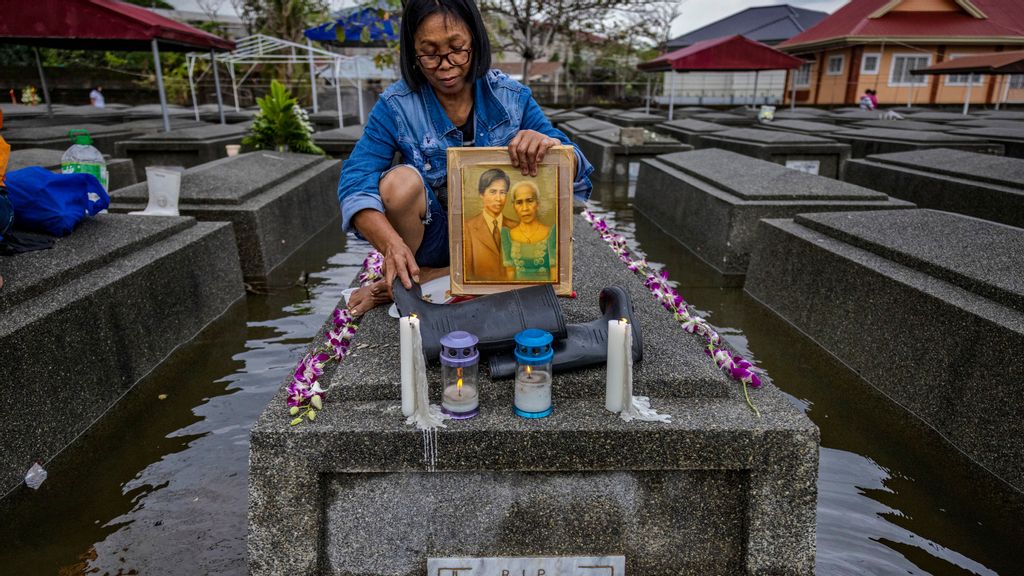 A woman places boots and a portrait at the tomb of a departed loved one a flooded cemetery following Tropical Storm Nalgae, as Filipinos mark All Saints' Day on November 01, 2022 in Masantol, Pampanga province, Philippines. PHOTO BY EZRA ACAYAN VIA GETTY IMAGES

Torrential downpours from Tropical Storm Nalgae caused rain-induced landslides across southern portions of the Philippines this past weekend. Officials there say at least 98 people were killed, 63 people were missing, and 69 people were injured throughout the country as of Monday, Reuters reported.

Nalgae continued to creep northward, away from the Philippines and into the South China Sea, on Monday. In the storm’s wake, streets looked like rivers across the archipelago, and many rescue attempts were ongoing.

“[The] Manila metro area picked up between 4 and 8 inches (100 and 200 mm (0.66 feets)) of rain from Friday through Sunday with some areas even picking up 11 inches (280 mm (0.92 feets)) in northern portions of the Philippines,” AccuWeather Lead International Meteorologist Jason Nicholls said.

Officials said more than 4,100 homes were damaged by Nalgae and over 975,000 people were forced to shelter in evacuation centers. Nearly 2 million people were affected by the storm, The Associated Press reported.

Nalgae, also known as Paeng in the Philippines, was a tropical storm as it moved over the country this past weekend. By early Tuesday local time, it had gained enough strength to become a typhoon.

As Nalgae moved back over the open waters of the South China Sea, it strengthened into the equivalent of a Category 1 hurricane in the Atlantic or East Pacific basins and was on a course toward China.

“The cyclone is expected to turn north as it pushes across the South China Sea and then curve north-northwestward during the first half of the week. This could lead to potential impacts in parts of southern China by mid- to late week,” AccuWeather Senior Meteorologist Bill Degar explained.

Nalgae will continue to track west-northwest, but as floodwaters linger throughout the Philippines, another tropical storm is brewing just east of the country, and AccuWeather meteorologists warn it could bring even more rain to the islands.

Tropical Storm Banyan, known as Queenie in the Philippines, will lose wind intensity as it tracks west-northwest over the next couple of days.

“However, the system can still bring rain, some heavy, to portions of Visayas and Mindanao, in southern areas of the Philippines, from Wednesday into Friday, local time,” Nicholls explained.

Rainfall will not be nearly as heavy as it was with Nalgae, but given the already saturated ground, there is still the risk of flooding, experts say.

«Previous Post
Tropical Storm Lisa Forms, Could Become A Hurricane Before Hitting Central America»Next Post
1st Weekend Of November Will Feel More Like May In The Northeast