The Historic Hurricane That Unleashed A Blizzard

The remains of a mini-golf course destroyed by Superstorm Sandy is seen at the boardwalk in Point Pleasant Beach, New Jersey. 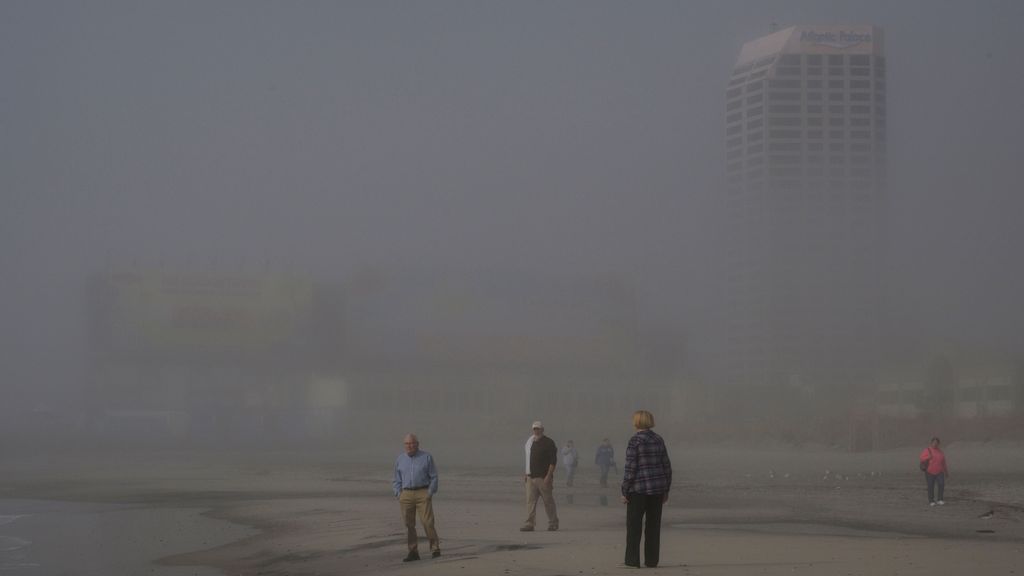 People walk on the beach near Steel Pier on a foggy morning in Atlantic City, New Jersey on October 26, 2022. - Ten years after the devastating hurricane Sandy, the seaside town of Atlantic City, on the American east coast, has fortified its famous promenade between its casinos and the Atlantic Ocean. PHOTO BY ANGELA WEISS VIA AFP/GETTY IMAGES

Superstorm Sandy is one of the most infamous hurricanes in recent history, a historic weather system that left millions in the dark, caused billions of dollars in damage and set the bar for what is the worst-case scenario for a landfalling tropical system in the mid-Atlantic region.

Over a decade has passed since the superstorm terrified the region on Oct. 29, 2012, and residents in New Jersey are still dealing with the financial fallout. Sandy ranks as the fourth costliest tropical cyclone in U.S. history and was classified as a 5 on the AccuWeather RealImpact™ Scale for Hurricanes.

One of the most intriguing aspects of the storm, from a meteorological perspective, did not take place in New Jersey where Sandy made landfall, but 300 miles inland across the Appalachian Mountains.

Blizzard warnings were issued by the National Weather Service offices in Charleston, West Virginia, Blacksburg, Virginia, and Baltimore, Maryland, due to heavy, blowing snow on the western edge of the storm, as tropical moisture clashed with incoming cold air from the west.

It was the first time in recorded history that the National Hurricane Center ever mentioned snow or blizzard conditions in its tropical forecasts.

Around 3 feet of snow accumulated in Richwood, West Virginia, located 60 miles east of Charleston, West Virginia, at an elevation of around 2,400 feet . The same amount was also recorded at Wolf Laurel Mountain in northwestern North Carolina. Snow was also measured in parts of Pennsylvania, Maryland, Ohio, Virginia, Tennessee and Kentucky.

It is rare for a tropical system to produce snow, although it is not unprecedented later in the hurricane season, according to AccuWeather Senior Weather Editor Jesse Ferrell. In 2005, a nor’easter that developed via energy from Hurricane Wilma delivered some snow to the interior Northeast as it made its way up the eastern U.S. in October of that year.

When Sandy hit, Extreme Meteorologist Reed Timmer elected to chase the system’s snow rather than where the historic superstorm roared into New Jersey.

He found himself in Elkins, West Virginia, one of the hardest-hit areas in terms of snowfall, with roads that were packed in powder.

SNOW!!! It’s about to get CRAZY here in Elkins, WV!

After Superstorm Sandy departed, millions of people began the long process of cleaning up after the storm. Restoring power to the millions of people in the dark was one of the top priorities, but the massive undertaking became complicated during the second week of November when an early-season nor’easter unloaded heavy snow over some of the areas that experienced the worst of Sandy’s wrath.

Snow spread across New Jersey, New York, Connecticut and up the coast of New England from Nov. 7 through Nov. 9, a little over one week after Sandy made landfall. Widespread accumulations of 4 to 8 inches of snow were reported from southern New Jersey to eastern Massachusetts, including 4.7 inches in New York City’s Central Park and a storm maximum of 13.5 inches in Clintonville, Connecticut.

Consolidated Edison, the primary power supplier in New York City, warned that another round of power outages was expected as the nor’easter began, including folks who had just recently had power restored following Sandy.

Piles of debris and garbage outside of homes were covered with snow, slowing down the process of removing the rubble in the wake of Sandy.

Additionally, many trees in the region had yet to shed all of their leaves ahead of winter, and the added weight of the snow was too much for some trees to handle. Downed limbs and trees contributed to over 700,000 power outages, according to NOAA.

“It’s a little overwhelming,” Barnegat Bay, New Jersey, resident Katie Wilford told The Associated Press. “I can’t believe we’re doing this again. We’re going on Day 10 with no power. That’s a long time. I just want the sun to come out and things to be normal again.”

“My son had just got his power back two days ago now along comes this nor’easter and it’s out again,” Staten Island resident Mark L. Fendrick said in a Twitter post during the nor’easter.

It wasn’t just the snow that created havoc in the storm-wary region.

Emergency sand dunes were constructed along the ravaged beaches of New Jersey over concerns that the nor’easter could lead to another round of significant coastal flooding.

Fortunately, the massive undertaking paid off as the newly-constructed dunes held, protecting the vulnerable oceanfront neighborhoods.