After 30 years, Azerbaijan Finally Decides To Have An Embassy In Israel 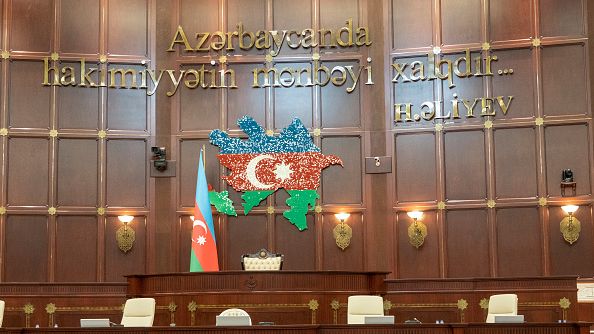 Interior view of the Parliament building in Baku, Azerbaijan on December 06, 2021. The building is situated along the shore of the Caspian Sea. EDWARD CRAWFORD/LIGHTROCKET VIA GETTY IMAGES

As relations between Azerbaijan and Iran have soured over the course of several months, Baku has decided to open an embassy in Israel, a report says.

Arzu Naghiyev, an Azerbaijani lawmaker reportedly said last week that there is already a decision” and that “the opening of Azerbaijan’s embassy in Israel can only be delayed by technical reasons.”

Armenia and Azerbaijan have decades-long territorial conflicts in which Iran is believed to support Yerevan. In September this year, Tehran warned against any further seizure of Armenian territory by its arch-rival.

Azerbaijan is to construct a transit road to Türkiye. The road will be built along the border between Armenia and Iran’s Northwestern part which is populated by ethnic Azerbaijanis who are reportedly encouraged by Baku to separate from the Islamic republic.

In early September, two news sites apparently linked to Azerbaijan military and the presidential administration published articles calling on the ethnic Azerbaijanis of Iran to revolt.

One of the articles stated: “The time for independent South Azerbaijan has definitely come! For there is no need to live in a country whose government does not allow you to feel like a full citizen!”

The Supreme Leader of Iran, Ayatollah Ali Khamenei said: “The military forces of the region are able to ensure the security of the region and should not allow foreign armies to interfere or have a military presence there to secure their own interests.”

Although, the Iranian and Azerbaijani foreign ministers pledged to resolve issues through talks last month, the tensions between both the countries only seem to increase.

On October 26, Iran’s state TV ran a song that threatened to destroy Israel, with a sharp warning for Azerbaijan.

“Israel &mldr; don’t stray too far from your path, don’t dig your own grave with your own hands &mldr; Iran declares this so that Azerbaijan knows and understands &mldr; anyone who looks at Iran the wrong way must be destroyed,” read the lyrics.

The decision to open an embassy in Israel is expected to strain Azerbaijan’s ties with Iran to a greater extent. However, Baku does not believe it should concern Iran.

“From time to time some tried to give rise to an idea that some countries wouldn’t like it if there were an Azerbaijani embassy in Israel.

“The state of Azerbaijan manages its own foreign policy. If Iran opens a consulate in Gafan [the Azerbaijani name for Kapan] and says ‘Armenia is our partner,’ there is no reason for us to shy away from any country.

“It never was the case and never will be,” said Naghiyev.