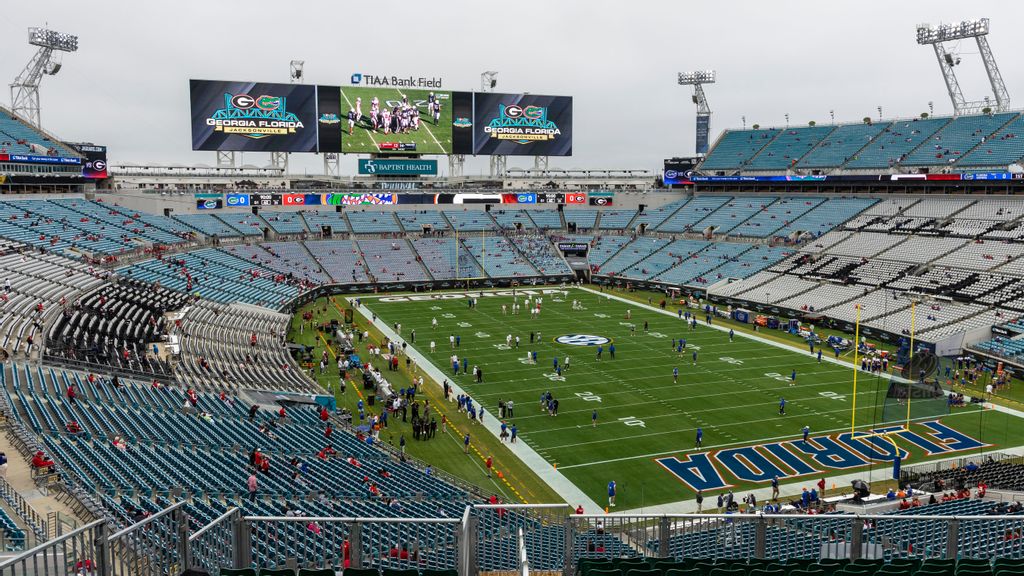 A general view before the start of a game between the Georgia Bulldogs and the Florida Gators at TIAA Bank Field on October 29, 2022, in Jacksonville, Florida. An alleged antisemitic incident occurred in the crowd after the game. JAMES GILBERT/GETTY IMAGES

Fans of college football who were hoping to enjoy a great rivalry when the University of Florida Gators took on the University of Georgia Bulldogs last weekend were subjected to anti-Semitic sentiments when the words “Kanye is right about the Jews” were digitally displayed on a side of TIAA Bank Field in Jacksonville, Fla., after the game.

The statement refers to anti-Semitic remarks made earlier this month by the rapper Kanye West, who now goes by Ye. Condemnations came from many persons, including from the Florida city’s Mayor Lenny Curry, who said, “Jacksonville is a city made better because of its diversity. Those who spread messages of hate, racism and anti-Semitism will not be able to change the heart of this city or her people. I condemn these cowards and their cowardly messages.”

Also weighing in were the administrations of both universities, which issued a joint statement saying that they “denounce these and all acts of anti-Semitism and other forms of hatred and intolerance. We are proud to be home to strong and thriving Jewish communities at UGA and UF, and we stand together against hate.”

The Chabad-Lubavitch emissaries who run the Chabad houses at the schools—Rabbi Berl and Chanie Goldman and Rabbi Aharon and Pessie Notik in Florida and Rabbi Michoel and Chana Refson in Georgia—issued their own joint statement: “Jewish Gators and Jewish Bulldogs are united with good people all over the world in condemning anti-Semitism, hate and bias of any kind,” the emissaries said. “It cannot and will not be tolerated. If any student or community member were disturbed by the display, our doors are open, please reach out to us. We are always here for you, and we will listen and help.” they said further. “The internet, and even a simple projector, gives anyone the ability to spread any message, even one of hate, to any number of people. It also empowers us however, to do the opposite,” they continued to say. “Today, each of us possess in our pocket a computer that would be unbelievable even a generation ago. Our words can reach others around the world, yet this tremendous blessing comes with a tremendous opportunity and responsibility.” they conclusively said.

The alleged hate incident at the college football game is just one of several recent anti-Semitic incidents in Jacksonville, including the appearance of several persons who stood on a highway overpass with banners that read “End Jewish Supremacy in America” and “Honk if you know it’s the Jews.”

According to the Anti-Defamation League’s “Audit of Antisemitic Incidents 2021,” the number of incidents in Florida increased from 127 in 2020 to 190 the following year. That figure includes 142 instances of harassment, 47 instances of vandalism and 1 assault.

To address security needs, the Jacksonville-based Jewish Federation and Foundation of Northeast Florida has signed an agreement with the Secure Community Network (SCN) to create a Community Security Initiative for the Jewish community as part of the LiveSecure program. “The rhetoric we have seen and heard in the last few weeks is unnerving and a scare tactic. However, our largest concern is that even one person will see this as a call to action and repeat what we witnessed in Pittsburgh exactly four years ago this weekend,” the Jewish Federation said in a statement, referring to the deadly attack at the Tree of Life synagogue.  “Through the establishment of a Community Security Initiative, we will be taking action to harden our campuses and our community and prepare to train to situational awareness those who work with our children, our seniors and our most vulnerable.” they said in their concluding remarks.