Workers discover hidden 2,000-year-old Roman road which had been hidden for centuries. 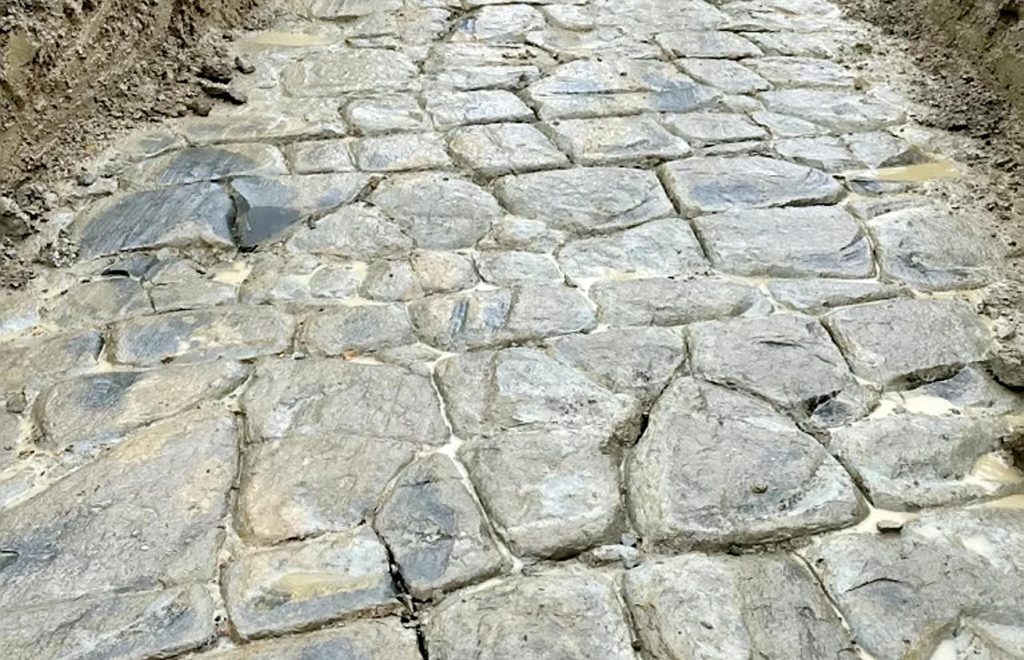 A ford thought to have been built by the Romans has been discovered in a Midlands town. (Wychavon District Council via SWNS)

Workmen in the United Kingdom have made an archeological discovery that could have important consequences for how we think about the history of Roman Britain.

A suspected Roman road idating back 2,000 years was discovered in a field earlier this year. The road could be the only one of its kind in Britain and of “global importance.” Archeologists say the cobbled ford uncovered near Evesham, Worcs., could be the finest Roman example of its type in the country.

If confirmed to originate from the first century AD, it would be “beyond rare” and the only road of its type in Britain.

The 32ft stretch, which is 9.6ft wide, was discovered during routine waterworks by Severn Trent a few weeks ago.

It is said to have been constructed like a wall with large stones laid in bands – a traditional Roman technique – with its only comparisons in Rome and Pompeii.

The exact location of the discovery is being concealed, but it was found by a river where a Roman-era villa complex was previously uncovered four years ago. Excavations are now taking place to find out more about the site, but experts say everything points to it being a genuine Roman structure – built 1,900 years ago.

The ford, which crosses a brook, also has ruts in the stones indicating it was used by carts for a long time.

“At the moment everything is ticking the boxes for it to be Roman, but it still feels too good to be true, so we are keeping an open mind,” Smyth said. “If it turns out to be medieval then it’s could still be considered to be nationally significant as nothing similar has been found in Britain to date.

“If it is a first-century Roman feature it is the only one of its kind to be found in Britain to date, there’s not really anything like this medieval either.

“If it was to be a Roman feature, with its only comparisons in Rome and Pompeii, you could argue it’s of world importance, not just of national importance.

“The stonework is absolutely perfect. It just ticks every box for being Roman.” Wychavon District Council has confirmed as yet, no dateable finds such as pieces of pottery or coins have been discovered which are usually used to help date the site.

Instead, a section dug from the road is to be sent off for optically stimulated luminescence testing which will measure the last time the sediment was exposed to sunlight. This process could take several months and in the meantime, the site may be reburied to protect it from deteriorating.

Historic England is being kept informed in the hope it will list it as an ancient monument, protecting it from future development. Evesham is a market town and parish in the Wychavon district of Worcestershire, in the West Midlands region of England.

Worcestershire is fertile ground for important archeological finds as Worcester was possibly the site of the Roman town of Vertis.The Roman army passed through the area now known as Worcestershire in the 40s and 50s AD as it pushed west to reach the River Severn on its way to Wales.