The Most “Horrific” Sights On Earth And In Space In 2022

The shift from intense heat to more comfortable conditions brought back the annual focus on Halloween celebrations. 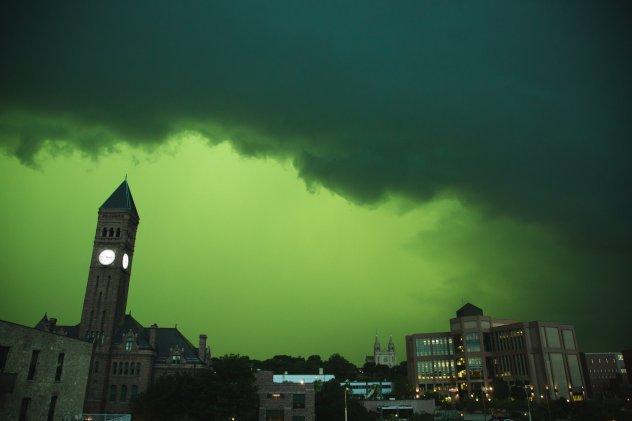 As the leaves turn beautiful shades of orange and red across the Northern Hemisphere, the weather has shifted from intense heat to more comfortable conditions and brought back the annual focus on pumpkin delicacies and Halloween celebrations.

Here are some of the most eerie weather and space occurrences AccuWeather covered this year, just in time for Halloween. Some of these resulted in headlines that were genuinely frightening and pictures that were unsettling.

During the first week of July, millions of residents found themselves in the path of severe weather across several states including South Dakota. The storms produced a considerable amount of rainfall, hail and wind reports.

After the storms passed South Dakota, a unique event stunned those in the state. The gloomy grey skies turned to a creepy shade of green that made places such as Sioux Falls appear to be trapped in a Halloween film.

The creation of this unique event was due to the time of day and the fuel sources of the storm.

The sun appears redder later in the day as it approaches the horizon, according to AccuWeather Meteorologist Isaac Longley.

Once light underneath tall thunderclouds is introduced, the combination of red sunlight and blue lights leads to the green colors engulfing the sky.

“Light underneath a tall thundercloud appears blue due to the scattering by water droplets,” Longley said. “When the blue light is illuminated by the red light from the setting sun, it appears green, which is why some thunderstorms have that greenish hue to them.”

Lurking in the depths of the universe some 161,000 light-years away from Earth is a massive tarantula, but unlike the fright-inducing spiders here on Earth, this galactic spider gives birth to new worlds and possibly life itself.

In September, the James Webb Space Telescope focused on the Tarantula Nebula and captured a stunning image of the far-away cluster. The nebula is made of a mass of interstellar gas and dust home to countless stars.

“Nicknamed the Tarantula Nebula for the appearance of its dusty filaments in previous telescope images, the nebula has long been a favorite for astronomers studying star formation,” NASA said. “The region resembles a burrowing tarantula’s home, lined with silk.”

The nebula is 340 light-years across and is the largest and brightest star-forming region in the galactic neighborhood where the Milky Way resides.

Old Kernville, California, was a thriving town home to many Western movies for decades. Previously named Whiskey Flat due to a saloon of the same name, the town sprung up toward the end of the Gold Rush in 1860.

After the turn of the century, the town became a hot spot for Wild West movies such as John Ford’s 1939 Oscar-winning film Stagecoach. After World War II, the military took control of the land in order to build a dam on the Kern River, which created a reservoir that would flood the entire town.

Residents took what little they could to higher ground while the majority of Old Kernville was detonated and washed away. Prolonged drought conditions in California eventually dried up the reservoir, which has now been reduced to as little as 8 percent.

In 2022, for the first time in 100 years, the foundations of what used to be Old Kernville were able to be seen in the light of day.

“There are still stories of an untold Old West here,” retired film producer and new Kernville resident Chuck Barbee told SFGATE. “What makes this place special is that it’s virtually unchanged, and you can still see what it was like when the first settlers came here in 1861.”

The misconception that there is no sound in space originates because most space is a ~vacuum, providing no way for sound waves to travel. A galaxy cluster has so much gas that we’ve picked up actual sound. Here it’s amplified, and mixed with other data, to hear a black hole! pic.twitter.com/RobcZs7F9e

The common misconception that there is no sound in space was disproven by NASA in August, and the result was a strange sound from many millions of miles away.

Most of outer space is a vacuum, meaning there is no way for sound waves to travel. However, NASA said that a galaxy cluster has so much gas that they were able to pick up actual sound from it.

The amplified sound was posted on Twitter and mixed with other data, providing a glimpse of what a black hole sounds like. In the 34-second clip, an eerie sound similar to howls and faint singing can be heard. The sound waves were extracted from the center, according to the post.

“Zombie ice” isn’t the name of a bad weather-themed horror movie, but a real event that researchers recently found to be causing glaciers in Greenland to melt faster than previously predicted.

A new study published in August in the journal Nature Climate Change shows over time that sea levels could rise at least 10 inches or more — mainly because of what scientists are describing as zombie ice.

“It’s dead ice. It’s just going to melt and disappear from the ice sheet. This ice has been consigned to the ocean, regardless of what climate (emissions) scenario we take now,” study co-author William Colgan, a glaciologist at the Geological Survey of Denmark and Greenland (GEUS), told The Associated Press.

Researchers say to think of zombie ice as an “ice budget deficit” that occurs when glaciers stop receiving enough snow to replenish the ice that is already melting away each year. The study claims that 10 inches of ocean rise are inevitable, but it could be even worse — up to 30 inches — if preventative measures aren’t taken.

The study considers only the melting in Greenland and does not factor in melting from any other ice sheets like Antarctica. That may not matter much, because even using the data from this study alone, the severity of the melting zombie ice is like having “one foot in the grave,” according to the lead author of the study, Jason Box from GEUS.

Around the same time that families across the country were carving out pumpkins ahead of Halloween, the cosmos appeared to make a jack-o’-lantern of its own.

On Thursday, Oct. 27, NASA’s Solar Dynamics Observatory captured an image of the sun that almost appeared as if the sun was smiling at the Earth with two eyes and an open mouth. The darkened regions were not on the sun itself, but rather in the sun’s atmosphere. These features are known as coronal holes.

Coronal holes are common in the sun’s atmosphere and can send streams of charged particles out into space. If the charged particles reach the Earth, they can spark colorful aurora in the night sky. Coincidentally, the three coronal holes appeared in a face-like formation just days before Halloween when countless pumpkins with carvings of faces on them are illuminated by flickering candles.

The sun could produce some auroras in the sky on Halloween night, although it is unlikely that the northern lights will be visible south of the U.S.-Canada border. Even if the aurora is visible across the far northern tier of the U.S., it will be far from the Halloween storms of 2003 that caused the aurora to be seen as far south as Texas and Florida.