The Monster Snowstorm That Canceled Halloween

An early-season nor’easter unloaded more than a foot of snow over parts of the Northeast in October. 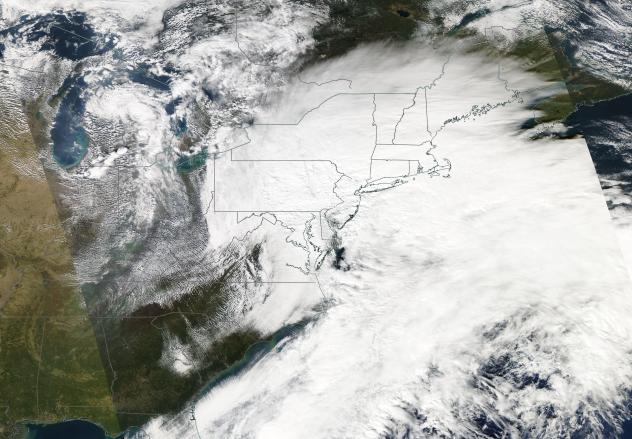 Carving pumpkins is a Halloween tradition for many families, but the jack-o’-lantern masterpieces left outside were buried under snow in 2011 when residents across the Northeast found themselves scrambling for snow shovels as a monster storm walloped the region.

The early-season nor’easter, called “Snowtober” and “Oktoberblast,” evolved into a nightmare as it left long-term power outages in areas that took a direct hit by Hurricane Irene just two months prior.

This wasn’t the first time in recent years that snow fell around Halloween. In 1993, snow accumulated across the Ohio Valley through parts of the mid-Atlantic, forcing some masqueraders to dress up in snowsuits rather than costumes, at least for those who braved the elements to go trick-or-treating.

However, the few inches that accumulated at the end of October 1993 paled in comparison to the nor’easter that stunned millions in 2011.

The worst of the storm in the eastern U.S. transpired two days before Halloween, but snow stuck around all the way into November from the mountains of northern Virginia through Maine.

Before the first flakes fell, meteorologists were already fearful of what could unfold. John LaCorte from the National Weather Service Office in State College, Pennsylvania, called the developing weather pattern “very unusual.”

“It has all the look and feel of a classic midwinter nor’easter,” LaCorte explained to CBS News before the first snowflakes started to fall. “It’s going to be very dangerous.”

This prediction came to fruition on Saturday, Oct. 29, when all of the ingredients came together to create a significant snowstorm.

The heaviest snow fell over the interior Northeast, but accumulating snowfall was recorded in some of the biggest cities along the Interstate 95 corridor, including Boston, New York City and Baltimore.

More than 10 times this amount fell farther inland, including the Berkshires in western Massachusetts. Peru, Massachusetts, was buried under 32 inches of snow, the highest snow total across the region. Other parts of the Berkshires as well as the Pocono Mountains of Pennsylvania and the Catskill Mountains of New York measured more than a foot of snow to start the season.

Widespread power outages were the biggest issue in the wake of the nor’easter as heavy snow weighed down trees that had yet to shed their leaves ahead of the winter. Trees and large limbs snapped under the weight, taking out power lines in the process.

Around 1,000 trees were felled in Central Park alone where just shy of 3 inches accumulated, according to The New York Times. This issue was much worse farther inland where heavier snow accumulated.

Connecticut escaped the heaviest of the snow, but the state accounted for nearly one-third of the 3 million power outages reported during the storm.

Some outages lasted more than a week and were compounded by the unseasonable chill that lingered for days. High temperatures struggled to reach 50 F for several days in a row due to the widespread snowpack. This was followed up by overnight lows in the lower 30s to mid-20s F.

Several fatalities were blamed on the lengthy power outages, including an elderly couple living in New Jersey who were found dead in their home after nearly a week without electricity, according to the Wall Street Journal. In total, 39 deaths were blamed on the treacherous nor’easter.

For many children, the timing of the snowstorm also derailed plans for trick-or-treating.

“Snow is still blocking many sidewalks and use of the roadway for (trick-or-treating) would be unsafe at this time,” Newtown, Connecticut, police said before Halloween night. “The possibility of tree limbs falling and slippery surface conditions contribute to the unsafe conditions.”

Historical probability of a White Halloween based on climate data. 🎃👻 pic.twitter.com/83XTflRnq2

This was the case elsewhere across the region, although some communities elected to delay trick-or-treating rather than cancel the annual festivities. Others elected to hold trunk-or-treat events in safe locations or in neighborhoods that still had power.

A snowy Halloween is very unusual outside the Rocky Mountains, the Cascade Mountains in the Northwest, across parts of the northern Plains and the Upper Midwest. According to climatologist Brian Brettschneider, the Northeast generally has between a 1% and 5% chance of having snow on the ground on Halloween during any given year. Brettschneider explained that he defined a white Halloween by a snow depth of at least 1 inch or at least 0.1 of an inch of new snow falling on Halloween.

The odds for a white Halloween are slim across most of the Southeast, southern Plains and West Coast, where most areas have never experienced snow on the scariest day of the year.

«Previous Post
Wintry Conditions To Sweep Through Western US In Coming Days»Next Post
Halloween Forecast: Enchanting For Some, Wet For Others