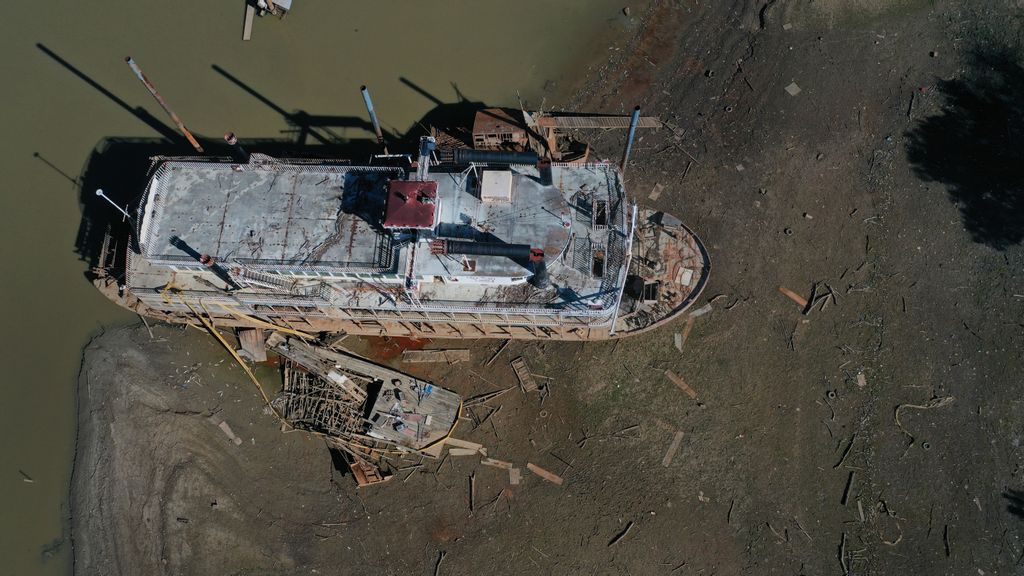 An aerial view shots the Diamond Lady, a once majestic riverboat, resting in mud at Riverside Park Marina in Martin Luther King Jr. Riverside Park along the Mississippi River on October 19, 2022 in Memphis, Tennessee. PHOTO BY SCOTT OLSON VIA GETTY IMAGES

The Mississippi River has faced historically low water levels all summer, revealing all sorts of hidden relics. However, with the river bed now lower than the Gulf of Mexico, saltwater woes have arisen.

“Once the river flow falls below 300,000 cubic feet per second in the Mississippi River, we start to see saltwater creep up the river,” Matt Roe, public affairs specialist for the U.S. Army Corps of Engineers in New Orleans, told AccuWeather.

The main concern is the impact the saltwater could have on the drinking water of several southern Louisiana communities. Plaquemines Parish has freshwater intakes right on the river.

Roe said the saltwater can affect their processing capabilities for municipal drinking water.

The Corps has encountered this problem four times so far. Roe claimed that the group’s experiences in 1988, 1999, and 2012 gave them the opportunity to begin working early this time. Since the middle of September, they had been monitoring the saltwater.

“We built basically an underwater lobby,” Roe said. “Saltwater is denser than freshwater and so it does sink to the bottom, and so we try to stop it there.”

The construction of the roughly 35-feet-high barrier, which was done with sediment drenched from upriver, is expected to be completed by this week. However, Roe cautioned the effectiveness of the solution isn’t fully guaranteed, and they will continue to monitor the saltwater levels to assess if more construction needs to be done.

The naturally occurring phenomenon, according to Roe, has caused Plaquemines Parish to issue a state of emergency and a drinking water advisory due to high sodium levels.

The parish has also ordered reverse osmosis units to help treat and desalinate their drinking water while the underwater sill is expected to prevent more problems upriver.

The underwater mound, or “sill,” built by the Army Corps to keep saltwater from running up the Mississippi River.

“As soon as the flow rates return to above 300,000 cubic feet per second, it’ll naturally wash away the sill,” Roe said. “Right now, the river doesn’t have the velocity or force to move the sill out of the way.”

“It takes a while for runoff to work its way down through the main tributaries and then into the main stem of the Mississippi,” AccuWeather Meteorologist Alex Sosnowski said. “When the ground is dry, a lot of that rain gets absorbed by the landscape, rather than reaching the rivers as runoff.”

The storm from earlier this week in the Midwest and South Central States, and more recently the storm into this weekend, will do little to raise water levels on the Mississippi and its major tributaries. As AccuWeather meteorologists have been saying, any increase in water levels from the storms will be delayed, slight and temporary.

Meanwhile, Roe said the communities are just waiting for some rain or snow to help the river rebound.