Penguin Feathers Could Be The Key To Effective Anti-icing Technology

Researchers hope the method could even be used to get ice off airplane wings. 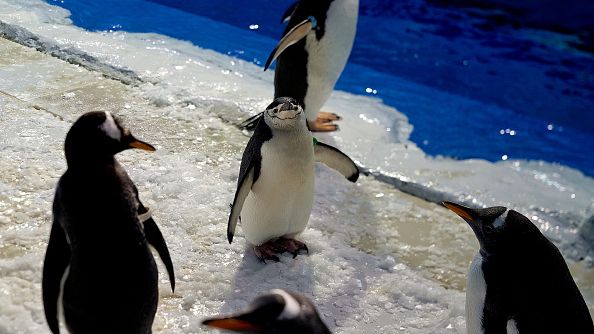 Gentoo penguins and Chinstrap penguins (aka Pygoscelis antarcticus) play at Harbin Polarland, in Harbin, Heilongjiang Province of China on July 13, 2022. Penguin feathers may be an effective way to deal with icing. SUN HANLUN/CHINA NEWS SERVICE VIA GETTY IMAGES

Penguin feathers may be the key to developing effective anti-icing technology, says a new research published in the journal ACS Applied Material Interfaces.

Scientists have developed a mesh that replicates the thawing effects of the creature’s fur.

The research team says it offers a chemical-free way of dealing with ice build-up on electric wires, wind turbines and possibly airplane wings. Existing techniques tend to be time-consuming, expensive and use a lot of energy and chemicals.

By looking to nature, the team from McGill University in Montreal, Canada, believes they have found a promising way of dealing with the problem.

The breakthrough eventually came from the wings of Gentoo penguins that swim in the ice-cold waters of the South Pole, with skins that remain ice-free even when the outer surface temperature is well below freezing.

The team found the feathers themselves have water-shedding properties while their barbed surfaces help melt the ice.

They were able to recreate these effects with a laser-machined woven wire mesh. They found the new method was 95 percent more effective at resisting ice build-up than an unwrapped sheet of polished stainless steel.

“It may seem counter-intuitive, but the key to ice shedding is all the pores of the mesh which draw water in under freezing conditions,” Study author Dr. Anne Kietzig said.

“The water in these pores is the last to freeze, creating cracks when it expands, much like you see in the ice cube trays in your freezer.

“We need such little force to remove ice from our meshes because the crack in each of these pores easily snakes along the surface of those woven wires.”

“Given the number of regulations in place in passenger aviation and the risks involved, it is unlikely that airplane wings will ever be simply wrapped in metal mesh,” Kietzig added.

“It is possible, however, that the surface of plane wings may one day incorporate the kind of texture that we are exploring, and that de-icing will occur.

“Thanks to a combination of traditional de-icing techniques working in concert in wing surfaces that incorporate surface texture inspired by penguin wings.

“It was only when we started investigating the qualities of penguin feathers that we discovered a material found in nature that was able to shed both water and ice,” she added.