Halloween Forecast: Enchanting For Some, Wet For Others

Young witches and wizards are getting ready for the most ghostly holiday of October, and the weather could disrupt Halloween. 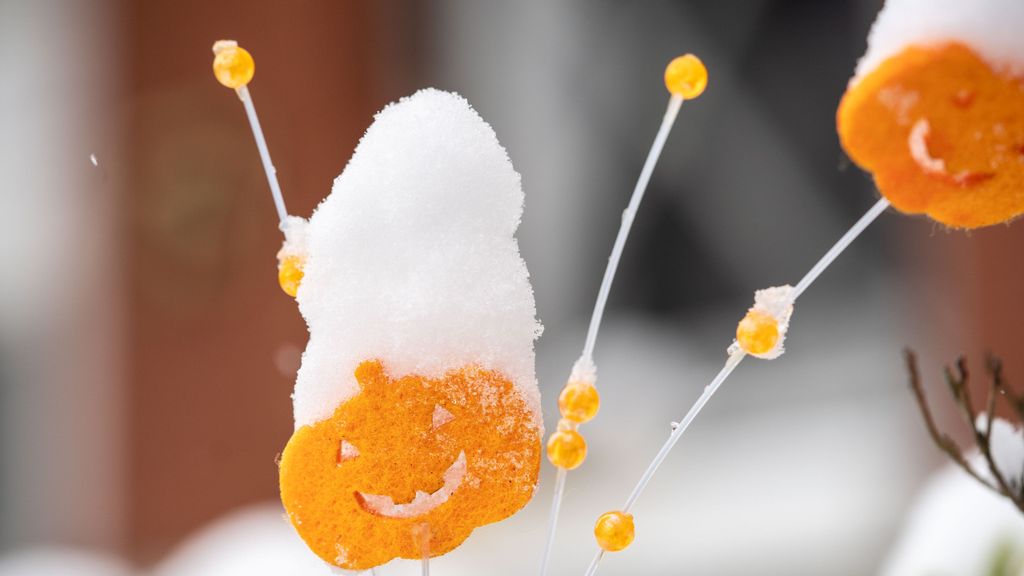 Covered with snow is a decoration made of felt from last Halloween in a front yard after it snowed the day before and during the night. PHOTO BY FRANK RUMPENHORST VIA GETTY IMAGES

Young witches and wizards are getting ready for the most ghostly holiday of October, and AccuWeather meteorologists have foreseen where the weather could disrupt Halloween festivities.

While fall revelers have likely been out and about all month long, for some, the pinnacle of the season is Halloween. Dry conditions are in the forecast for Monday evening in many of the country’s biggest cities, including Chicago, Minneapolis, Denver and Los Angeles. In many areas, it will also be rather mild. Sacramento is forecast to reach the 70s during the afternoon with temperatures dropping into the 60s when trick-or-treaters start to head out into the neighborhood to collect candy. Similar conditions are in the forecast for the Dallas area.

Some places might be chilly enough that young masqueraders may want a coat over their costumes. In Rapid City, South Dakota, temperatures will be in the upper 40s in the evening, while Denver will sport temperatures near 50 F.

Despite the majority of the country being dry on Monday evening, there will still be some soggy locations that could dampen Halloween festivities.

“The same storm that produced several tornados across the central Gulf Coast on Saturday will move into the mid-Atlantic and eastern Great Lakes for Monday,” said AccuWeather Meteorologist Thomas Geiger.

Geiger explains that, fortunately, the storm is expected to be less intense than it was over the weekend and much less likely to produce severe weather. Even still, cities from Detroit and Cincinnati to Washington, D.C., and New York City could all have a shower or two dampening activities on Monday evening.

There can be some rumbles of thunder accompanying showers farther south, perhaps in Georgia and South Carolina.

“Although there will be showers around, no one location looks to have a washout on Monday evening. Utilizing AccuWeather MinuteCast® on the website or AccuWeather App can help you find the driest window for going trick-or-treating,” said Geiger.

On the opposite side of the country, wet weather is poised in the western U.S. as well.

“Heavy rain is expected to drench most of Washington, along with western Oregon. In these locations, trick-or-treaters will want wear a rain jacket if they still plan on going out for candy,” Geiger said.

This potent storm plowing through the Northwest will bring with it a wave of cooler air, allowing for precipitation in the higher elevations of the Cascades to fall as snow.

One other wet location, which will be far too warm for snow, is Texas, where some Gulf of Mexico moisture will contribute to some rain in the southern portion of the state.

Much of this zone has experienced a nearly-bone dry October. Brownsville has only reported 0.88 of an inch of rain, when over 3.5 inches is typical for the month. Houston has not been quite as dry, recording 1.83 inches; however, this rain amount is a minuscule 34% of normal for the month.

While the recent dry conditions could bring the threat of localized flooding and require jackets and umbrellas to accompany Halloween costumes, the rain is good news in the longer term.

After the scary season unofficially ends on Nov. 1, many may be looking ahead as to what the winter will bring. AccuWeather Long-Range experts break down what each region of the country can expect for the chilliest season of the year.

«Previous Post
The Monster Snowstorm That Canceled Halloween»Next Post
In A Small Steel Town, A Deadly Smog Event Sparked A Week Of Terror