Blown Away By The ’Love Affair’ Between Biden And Herzog, US Ambassador

The ambassador was heartened by the level of concern people have for Israel. 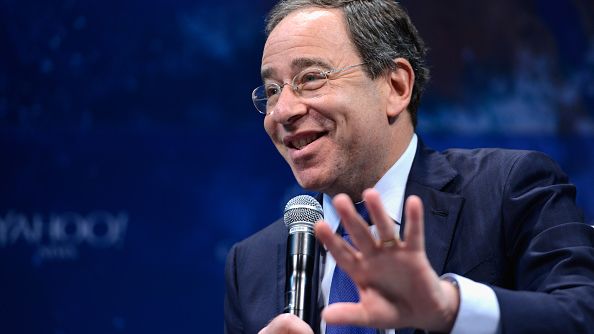 Tom Nides speaks on stage during the 2015 Concordia Summit at Grand Hyatt in New York City on October 2, 2015. The ambassador says he is the most concerned about Israel's security. LEIGH VOGEL/GETTY IMAGES

U.S. Ambassador to Israel Tom Nides, fresh off a trip to Washington for the Israeli president’s visit, addressed the American Jewish community on Friday morning in a pre-Shabbat briefing.

Nides, who joined the Oval Office meeting Wednesday between U.S. President Joe Biden and Israeli President Isaac Herzog, said he was “blown away by this love affair” between the two leaders.

“I give Joe Biden credit because he’s really busy right now. And breaking out time to spend an hour and a half with the president of Israel a couple [of] weeks before our election in the United States shows that this is an important visit for the United States,” Nides said on the Zoom call hosted by Shelley Greenspan, the White House liaison to American Jewry.

Nides, who has now been on the job for roughly one year, said the biggest surprise for him thus far has been how many and how much people care about Israel. “It’s a level of insanity here, between Jews and Christians and Arabs, and everything in between.

Nides also expressed surprise at the whole-of-government cooperation between the two countries, from the executive branches to military and intelligence. He said he is working on a number of initiatives, high among them the languishing visa waiver program, which would allow Israelis to travel to the U.S. without a waiver.

The effort predates the Biden administration, going back decades, but Israel has been unable to present data and documentation showing its eligibility for the program given the metrics in place.

Nides regularly tweets about the importance of the program. “I want to get this visa waiver done. It is ridiculous that Israel doesn’t have a visa waiver program. There’s 30-plus countries that have these waivers,” said Nides.

“It’s for Israelis who want to visit the United States having to stand in lines, screwing around with all that stuff. I’m working very closely with my friends at DHS (the U.S. Department of Homeland Security) and I think we can get this done.”

Nides also said the program would help Palestinian-Americans “who get harassed at the airport.”

One of the reasons the U.S. has given for past denial of Israel’s entry to the visa waiver program is Israel’s scrutiny of Palestinians entering through Ben Gurion Airport, including those with American citizenship.

The U.S. demands freer entry for Americans in exchange for reciprocation through the visa waiver program. He spoke of Israel’s election next week, attempting to put to rest fears among some in the American Jewish community that the formation of an Israeli government including far-right elements would harm U.S.-Israel relations.

“I have to continually remind people, regardless if you are to the left or right, if you are a J Street person or an AIPAC person, if you’re a Peace Now person, or part of the Orthodox community, it doesn’t matter.

“My job is to make sure everyone understands we have an unbreakable bond with Israel,” said Nides. “So, God knows what will ultimately come on Tuesday, and it does matter, obviously. But not the fundamental core of the American people’s love affair with Israel, even when you disagree with Israel.”

When asked by Greenspan whether he was concerned by increasing violence between Israeli security forces and Palestinians, along with civilian conflicts, in Judea and Samaria, Nides responded, “What goes on in the West Bank and Gaza affects Israel? I cannot be blind to it. First and foremost, I worry about the security of Israel.”

He detailed his attendance at the funerals or shiva for each Israeli victim of terror since he started his tenure in Jerusalem. “It’s just like in every conflict, there is a very small percentage of people who are the troublemakers, who are the terrorists, who need to be taken out and taken care of. But that said, the reason why this administration feels so strongly about helping the Palestinian people is we cannot let them lose hope.

When people lose hope they do all sorts of stuff,” said Nides.

He said earlier this week that the White House brushed aside recent comments by Palestinian Authority President Mahmoud Abbas that were harshly critical of the U.S. and sympathetic toward Russia due to the need to focus in on containing the situation in Judea and Samaria, rather than straining relations further with Abbas.

Lastly, Nides addressed the rise of anti-Semitism in the U.S., which was brought to light by recent Jew-hating comments made by entertainer Kanye West. “I don’t know if [West] is just a lunatic or not, but we have to push back on this.

“I don’t care how big a star or how rich you are. If you’re spewing hate, it is all of our responsibility,” said Nides, who also lamented the high levels of hate experienced by Jews on American college campuses.

“What’s going on in college campuses right now guys is really scary. Many of you on this call have kids who are in college. It’s not great out there.

“We need to have education, and we need to speak up,” said Nides.