European bison are the closest living relatives to those that roamed the UK thousands of years ago. 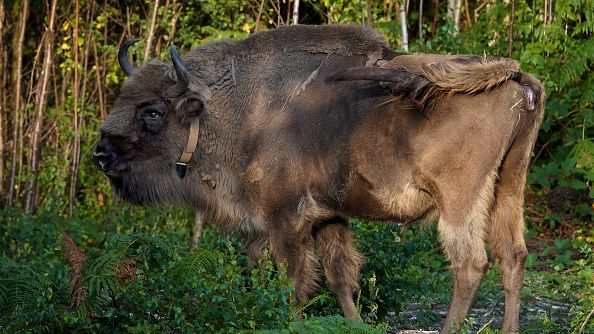 One of four of bison explores her surroundings as they are released into West Blean and Thornden Woods, near Canterbury in Kent, July 18, 2022. The herd of four wild bison is the first released into the UK. GARETH FULLER/PA IMAGES VIA GETTY IMAGES

For the first time in a thousand years, the Wilder Blean bison herd welcomed its fourth member, a female calf, in September.

The Wildwood Trust and Kent Wildlife Trust initiated a wilding project – “Wilder Blean” in Blean woods near Canterbury – to bring bison back to the UK.

The bison were brought to the woodland in July 2022, but the birth of a new Bison came as surprise. The rangers were unaware that one of the female bison was pregnant, owing to the typical herd tendency of guarding the young before birth.

“There were a couple of days when we didn’t see female 2 and that was sort of an alarm bell, because she’s normally very confident and the one up at the front. I hoped she was OK,” said Tom Gibbs, a Bison ranger.

“The other two females were also a bit more on edge and defensive, warning me about something,” he added.

European bison are the best hope for Wilder Blean to restore the habitat that was lost when the previous species went extinct.

The project’s goal is to foster stronger ecosystems by restoring natural processes that can persevere, and reverse the current environmental catastrophe and species decline – hence the term “wilding” rather than “rewilding.”

Bison are capable of naturally managing woodlands, creating habitat for a variety of other wildlife, are more financially viable to lower the carbon imprint of woodland management.

“What a surprise this must have been! Back in the summer of 2022, a very exciting arrival joined the three European Bison that were introduced in Kent as part of the Wilder Blean Project with @WildwoodTrust & @KentWildlife. Isn’t this little lady just gorgeous,” tweeted Widlwood.

The European bison differs from the American bison in several respects. It lives in woodlands and is slightly larger, longer-legged, and is less heavily built than the American bison. They prefer grass and herbs, but they will eat twigs and leaves as well.

Bison herds have short seasonal migrations, traveling a few hundred kilometers south in the winter and then returning north when the weather warms up.

A usual herd of bison consists of small bands, with one or more females and several generations of their progeny. Adult males dwell on the outskirts of the band or create their separate groups. Large transient herds of bison can form when dozens or even hundreds of individual bands congregate.

The European bison, native to Europe, became extinct in the wild after World War I. The herds created from zoo-bred animals were successfully reintroduced to relatively small nature reserves in Europe over time.

The International Union for Conservation of Nature and Natural Resources reported that the European bison population rose by more than 10% per year between 2015 and 2019, with surveys estimating 2,500 mature animals by 2020.

“To think that their numbers now swell beyond 9,000 is a true testament to the commitment and dedication of international breeding efforts and, as an organisation, Kent Wildlife Trust are privileged to now be part of that journey,” said Paul Hadway, Director of Conservation of Kent Wildlife Trust.