Fariba Hashimi could become the first Afghan to race in the Tour de France Femmes. 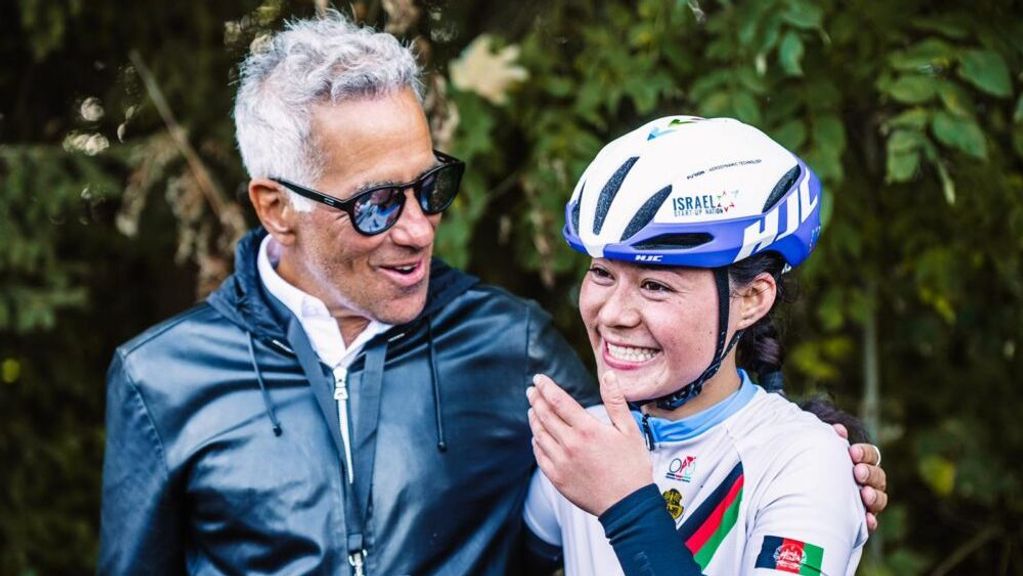 Sylvan Adams, left, congratulates Fariba Hashimi, a contestant in the Afghan national cycling championship held in exile in Switzerland. She says she is racing for all the women in her country. NOA ARNON

Cycling is doubling as a form of political resistance for the Hashimi sisters.

The two siblings, originally from Afghanistan — Fariba, 19, and Yulduz, 22 — finished first and second, respectively, in the Afghan national cycling championship held in exile in Switzerland.

IPT owner Sylvan Adams, a Canadian-Israeli philanthropist who participated in an operation that helped hundreds of Afghans to escape the Taliban in August 2021, said: “We are making history here as these two brave women become the first from their country to reach this level of the sport. It is part of our commitment to helping young cyclists from all over the world — from developing nations to war zones.”

Fariba’s slot on next season’s roster gives her a chance to race in the Tour de France Femmes. With the announcement of a U23 Continental team in the works, Yulduz will join her next year.

The Tour de France Femmes, which fought for years to include women in major cycling races, held its first race in July.  Annermiek van Vieuten of the Netherland’s Movistar Team proved victorious.

Both Hashimi sisters have been racing for the Italian team Valcar since escaping their home country last year.

Valcar Travel and Service is among the most successful women’s teams with seven UCI victories to date. The team was initially created in 2008 with girls aged 12 to 14 before it added older riders to its roster. Big names on the team include Elisa Balsamo, Marta Cavalli and Vittoria Guazzini.

“I will take the challenge head-on and race for all the women in Afghanistan,” Fariba pledged, noting that her native land “is dangerous for many of the women living there.”

The situation is grim for her countrywomen, who regularly face abuse and a deteriorating quality of life.

Sima Bahous, executive director at UN Women told UN News: “It has been a year of increasing disrespect for their right to live free and equal lives, denying them opportunity to livelihoods, access to health care and education, and escape from situations of violence.

“Afghanistan is the only country in the world where girls are banned from going to high school and effectively barred from political participation, as the Taliban has an all-male cabinet and there is no Ministry of Women’s Affairs,” she said.

Drought and the war in Ukraine have exacerbated a deep economic and humanitarian crisis, Dr. Natalia Kanem, head of the UN Population Fund (UNFPA), has noted. For the estimated 24,000 women who give birth each month in hard-to-reach areas, childbirth can, in effect, be a death sentence,” she said.