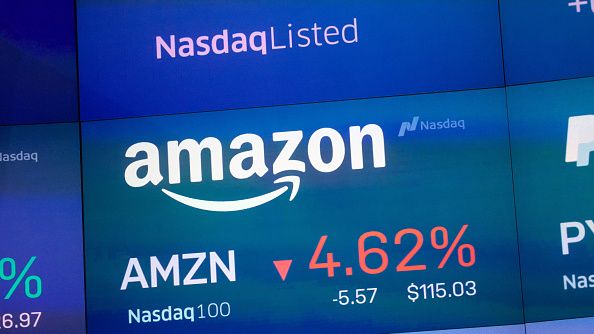 Amazon signage displayed during the Mobileye IPO at the Nasdaq MarketSite in New York, US, on Wednesday, Oct. 26, 2022. Mobileye Global Inc. priced one of the biggest US initial public offerings of the year. MICHAEL NAGLE/BLOOMBERG VIA GETTY IMAGES

The major U.S. averages closed Thursday’s session on a mixed note, with the S&P 500 and the Nasdaq Composite indices declining sharply, while the Dow Industrials bucked the downtrend.

While earnings reports from a couple of Dow components propped up the blue-chip average, earnings also proved to be the undoing of the tech-heavy Nasdaq index.

“The U.S. is not currently in recession, given the strength of the consumer sector,” Jeffrey Roach, chief economist for LPL Financial said.

“A deteriorating housing market and nagging inflation along with an aggressive Federal Reserve put the economy on unsure footing for 2023,” the economist said, adding that the markets have possibly priced in much of the near-term recession risks.

The next five trading days are historically the best of the year for the S&P 500 Index, said Ryan Detrick, chief market strategist at Carson Group.

The next five trading days are the best of the year for the S&P 500.

Going back to 1950, stocks gained 1.62% on average. There isn’t a single 5-day period of the year better. pic.twitter.com/7a3kJCiRrP

On the economic front, the Bureau of Economic Analysis will release the personal income and spending report for September at 8:30 a.m. ET. Apart from the main metrics, traders may also focus on the annual rate of the core personal consumption expenditure index, which is the Fed’s preferred inflation gauge.

At 10 a.m. EDT, the National Association Of Realtors will release the pending home sales index for September. The headline index is a measure of future housing activity.

The University of Michigan will release the final consumer sentiment index for October, also at 10 a.m. EDT. The preliminary reading released in early October showed an increase in the index from 58.6 in September to 59.8.

Commodities, Other Global Equity Markets: Crude oil futures are slipping, snapping a three-session gain. A barrel of crude oil traded at a little over the $88 level, up about 0.85%.

The major Asia-Pacific markets retreated on Friday, with the Hong Kong and Chinese markets leading the slide. Sentiment soured amid the lingering COVID-19 threat in China and the mixed lead from Wall Street overnight. The Bank of Japan’s monetary-policy setting arm, which met on Friday, opted to keep its ultra-loose policy rate unchanged.