Late-season Atlantic Tropical Activity Could Pose Trouble For US, Caribbean 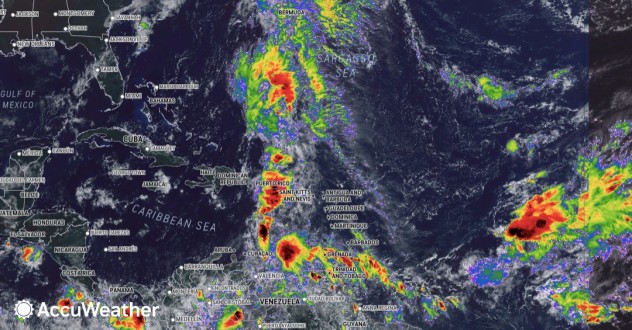 The tropical Atlantic is showing no signs of taking a long winter’s nap just yet. AccuWeather meteorologists say lingering tropical activity is forecast well into November in parts of the Atlantic as well as the Caribbean Sea.

More than one tropical area of concern over the next week could develop in the Caribbean, and there remains a possibility, based on long-range forecast data, that a system could eventually approach the United States.

In the Atlantic, a broad area of intense downpours and thunderstorms that extended for hundreds of miles east of the Bahamas through Puerto Rico and the Virgin Islands to the eastern Caribbean was under the watchful eye of forecasters on Thursday.

There is a medium chance for tropical or subtropical development through Saturday in a zone of the Atlantic that is northeast of the Bahamas and southwest of Bermuda, forecasters say.

A tropical depression could form if the system develops a closed circulation but its maximum sustained winds remain under 39 mph. If the same circumstances unfold and maximum winds reach 39 mph or greater, the fledgling storm would be classified by the National Hurricane Center as a tropical or subtropical storm.

“The best chance for the development of this feature is likely Friday or Saturday,” AccuWeather Senior Meteorologist Dan Pydynowski said. “Beyond Saturday, the window for further development will begin to close as the system encounters cooler waters and increasing disruptive winds.”

Regardless of development, the system will drift to the northeast and will bring some locally heavy rainfall and gusty winds to Bermuda at times through the weekend.

“In terms of impact on the U.S., effects will be limited to rough surf, rip currents and minor coastal flooding around times of high tide along the beaches of the Southeast and mid-Atlantic states through the weekend,” Pydynowski said.

The circulation around an area of high pressure over the interior Northeast will contribute to the rough surf just as much as the system near Bermuda. This high-pressure area will allow a dry and sunny autumn weekend to unfold across much of the Northeast.

Another area AccuWeather meteorologists are keeping tabs on is the Caribbean. In that part of the basin, a tropical disturbance located more than 1,000 miles to the south of the system between the Bahamas and Bermuda could begin to develop starting this weekend. However, this same zone may remain a source for tropical activity into the middle of November as well.

As October draws to a close and November begins, a batch of showers and thunderstorms, commonly referred to as a tropical wave in the weather community, will move slowly westward across the Caribbean.

Water temperatures in the 80s and low disruptive winds in the atmosphere could be enough to slowly nurture this tropical wave and allow development.

There is a medium chance of development of this feature from Saturday through almost the end of next week as the system moves westward, according to Pydynowski.

At the very least, the system will produce drenching showers and thunderstorms as it moves westward.

Whether the northern or southern islands of the Caribbean are more affected will depend on the exact position and strength of the disturbance as it moves along. A more organized system could take a route over the middle of the Caribbean or bounce along the Greater Antilles from Puerto Rico to Cuba. A more southern route could bring downpours to the ABC islands and the northern coast of South America.

At this time, it appears a northward path toward the U.S. will be blocked by strong winds and a belt of high pressure that may form, AccuWeather Senior Meteorologist Courtney Travis said. As long as these conditions occur, the most likely path for the system will be westward and into Central America at the end of next week.

In the wake of next week’s Caribbean system, there is a chance of additional development in the same body of water where water temperatures are bathlike. At the same time, weather systems farther north will change and shift position.

“Any tropical system that develops in the western part of the Caribbean beyond next week could be trouble for the U.S. and, more specifically, Florida,” AccuWeather Chief On-Air Meteorologist Bernie Rayno said.

“It looks like there will be a pronounced dip in the jet stream in the Western states, and at the same time, an area of high pressure will build near Bermuda next weekend,” Rayno explained. “South to north steering winds that develop from that setup could open the door for any system in the Caribbean to move northward toward the Gulf of Mexico or the Florida Straits.”

Long-range forecasters say early indications are that the Caribbean Sea will remain unsettled from the first to second weeks of November with the potential for showers and thunderstorms to organize into one or more tropical systems. If development occurs farther to the east in the Caribbean, meteorologists say there would be concerns for impacts from heavy rain and high winds from a tropical system that could shift away from Florida and toward the eastern Caribbean islands.

As of Oct. 27, there have been two tropical depressions, six tropical storms and five hurricanes. The only two major hurricanes — Fiona and Ian — were systems that originated in the Caribbean. Both reached Category 4 intensity. Ian’s maximum sustained winds peaked at 155 mph just prior to striking southwestern Florida and causing a significant loss of life and great destruction in late September.

With 11 named systems as of late October and a little more than a month to go, the 2022 season is running slightly below the average for this time of year of 13 named systems. However, given the current outlook for the basin over the next couple of weeks, there is potential to catch back up to that number.

Over the course of the year, there are typically 14 named systems, of which seven become hurricanes and three reach major hurricane strength of Category 3 or greater. Hurricane season does not officially end until Nov. 30.

The next three names that could be used to identify storms during the 2022 Atlantic hurricane season are Lisa, Martin and Nicole.