Americans take football so seriously that half of them have actually ended a friendship over a rivalry, according to a new poll 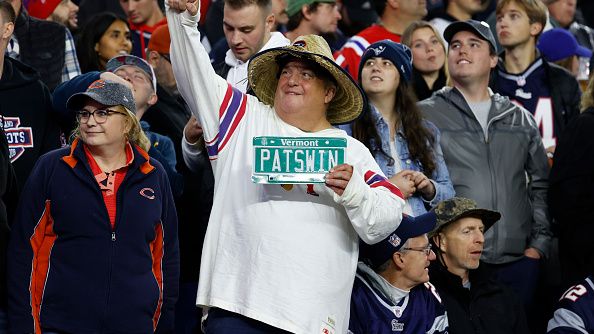 A Patriots fan with his license plate during a game between the New England Patriots and the Chicago Bears, at Gillette Stadium in Foxborough, Massachusetts, MA on October 24, 2022. FRED KFOURY III/ICON SPORTWITRE VIA GETTY IMAGES

Americans take football so seriously that half of them have actually ended a friendship over a rivalry, according to a new poll.

A survey of 2,000 U.S. football fans examined how respondents celebrate game day, finding that 52% have called it quits with a friend because they support their favorite team’s rival.

Also, when their team loses, it takes an average of three days to get over the loss. Still, that hasn’t stopped fans from continuing to cheer for their favorite team from their favorite place.

When it comes to celebrating game day, people typically do a mix of hosting and attending parties during the football season (39%). On average, people host six game day parties throughout the season, and their guests are usually fans of their favorite team (46%) or a mix of fans and non-fans (28%).

It’s no surprise that three in four of those who host parties say it’s the highlight of their football season (75%).  Conducted by OnePoll on behalf of Litehouse , the survey asked respondents what makes a successful game day party, with many saying it’s the game itself (26%), the people (26%), the food (22%) and drinks (21%).

While blue cheese and ranch ranked high on the list of top game day dips, respondents were split on which one they preferred (43% and 42%, respectively).

“No matter what team you’re rooting for, football fans agree that the snacks can make or break any game day party,” said Heidi Wieber, brand manager at Litehouse.

“Serving your favorite bites and appetizers alongside a variety of delicious dressings and dips can help upgrade your game day snack table, so there’s something everyone can enjoy throughout the game.”

As inflation continues to soar nationwide, the research suggests that a majority of football fans are taking the economy into consideration when planning their game day events.

Half of football fans plan to “homegate” – tailgating at home – this year (51%) because they’re more comfortable at home (19%), it’s more fun (17%) and saves money (16%).  For those who plan to “homegate” this football season, their preferred food options for their indoor events are cooking or preparing homemade food and snacks (53%) and ordering takeout (24%).

Half of football fans also admit the parties they’ve either attended or hosted are preparing them for the Big Game in 2023 (51%).  Delicious food is definitely on the menu since two in five expect to eat more during the Big Game (42%) than at a regular tailgating event (39%) or “homegating” party (10%).

“With a majority of Americans planning to tailgate at home this year, hosting a winning and memorable homegating party is simple with our delicious dressings and dips,” added Wieber.

“And, if you’re not hosting, these dressings and dips are easy to bring to any game day party and a perfect match for all dippable foods from more traditional snacks like veggies and chips to game day staples like pizza, burgers and hot dogs.”