The deal faced pushback because Kaepernick did not reportedly want to promote the merger on television. 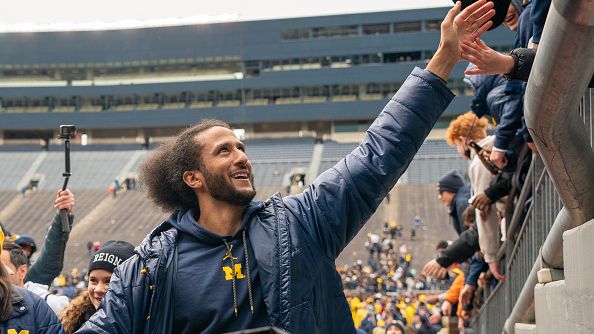 Colin Kaepernick interacts with fans as he leaves the field following the Michigan Football spring game at Michigan Stadium, in Ann Arbor, Michigan on April 2, 2022. Kaepernick was honorary captain for the game. JAIME CRAWFORD/GETTY IMAGES

A SPAC that included a former National Football League quarterback is the latest to announce a liquidation.

The SPAC was close to locking down a deal, but it might have fallen apart at the hands of the quarterback.

SPAC expert Julian Klymochko noted on Twitter that Mission Advancement had a deal planned in December 2021 that fell apart. One of the contributing factors to the deal collapsing was the refusal by Kaepernick to promote the merger on live television.

“This mistake not only cost the sponsor $7 million in cash but also as much as $86 million in stock,” Klymochko tweeted.

Mission Advancement was in talks to merge with The Change Co., a company that specializes in providing lending to minority borrowers who are underserved by traditional banks.

“Mr. Kaepernick balked at requests from Change Co. executives that he sit for an appearance with George Stephanopoulos on ‘Good Morning America’ and declined to participate in interviews as part of the rollout,” a report citing internal documents said.

After SPAC deals are announced, it was and to some extent still is common for those behind the SPAC or companies going public to make the media rounds with appearances on television. Kaepernick’s refusal to do so might have been a surprise to the SPAC that promoted his involvement hard at the time of the offering.

The report says Tyler Perry, musicians J. Cole, Quavo and Nas and WNBA players Diana Taurasi and Maya Moore were going to invest in the SPAC merger, thanks in part to Kaepernick’s involvement.

The sponsors of the SPAC, which included Kaepernick were said to be willing to contribute $10 million towards the deal. In return, the sponsors would get $80 million in founder shares.

Why It’s Important: Gary Gensler, the head of the Securities and Exchange Commission, previously called out the high number of celebrities such as athletes, actors and politicians linked to SPACs, also called blank check companies.

The merger target was likely hoping to capitalize on the familiarity of Kaepernick to help boost its brand and the overall value of the company, something that Kaepernick would have been rewarded with as an investor of the combined company.

The former NFL player also has an advertising deal with Nike Inc (NYSE: NKE). Campaigns at Nike from Kaepernick boosted the company’s value by $6 billion and sales by 31% according to the original SPAC filing.

The SPAC filing originally said that Kaepernick was expected to stay engaged in the target company, join the board of directors and become a global brand ambassador.

Kaepernick was mentioned 123 times in the SPAC filing, with Mission Advancement seeking to find an ESG-themed company valued at around $1 billion.

Instead of getting a deal done with a company helping minority members get more access to funding, the SPAC is now one of the many that are liquidating.

The SPAC will pay out net asset value to investors on common shares with warrants being worthless at redemption. Sponsors of the SPAC will also miss out on potential millions in free shares from getting a deal completed.