What is typically an island jutting out of the murky river waters have been submerged for an unknown amount of time. 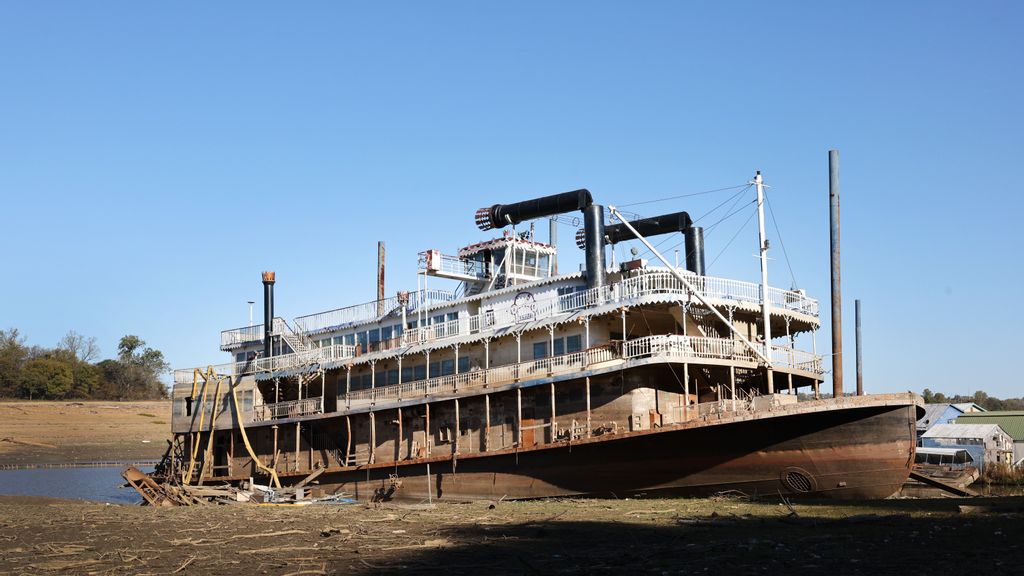 The Diamond Lady, a once majestic riverboat, rests in mud at Riverside Park Marina in Martin Luther King Jr. Riverside Park along the Mississippi River on October 19, 2022 in Memphis, Tennessee. PHOTO BY SCOTT OLSON VIA GETTY IMAGES

Historically low water levels on the Mississippi River have revealed a walkway to what is typically an island jutting out of the murky river waters to human remains that have been submerged for an unknown amount of time. Now, a treasure hunter has discovered valuable relics that have been hidden underwater since the 1800s.

Riley Bryant travels across the United States to unearth centuries-old artifacts, and he recently took advantage of the plunging water levels on the Mississippi River near Memphis, Tennessee, to search for rare items lost to time.

“I found all kinds of artifacts ranging from Civil War bullets to old bottles to old coins,” Bryant told AccuWeather. “Pretty much every artifact you can think of from the time Memphis was founded to modern times.”

One of the more intriguing objects that Bryant found was a Civil War-era box plate that he described on Instagram as one of the “coolest surface finds ever.“

Bryant said that he has been searching for artifacts for over a decade and has been digging for historical objects in nearly every U.S. state. Like many treasure hunts, his Mississippi River discoveries were not just by happenstance.

“I wanted to search that specific spot because the river bank above was once the site of a fort during the Civil War that was occupied by Union soldiers,” Bryant said. “I knew there had to be some artifacts washed out.”

Sometimes his searches involve a metal detector, but his recent finds near the Mississippi were spotted simply by his keen eyes.

“There’s far too much scrap metal and old ship pieces to use a metal detector,” he added.

“Though I’ve found a lot of valuable things, I’ve never sold any of them, as the history means too much to me,” Bryant told AccuWeather. “I actually have my own private museum that I travel the country with attending public artifact shows and history events.”

People who are thinking about combing the banks of the Mississippi River to look for artifacts similar to Bryant might want to start their search sooner rather than later.

No significant relief is on the way for the drought-stricken region, but some rain is forecast to fall across the Mississippi River watershed in the coming days.

According to AccuWeather Senior Meteorologist Paul Pastelok, the upcoming storms forecast to move over the watershed into the first part of November will help to raise the water level slightly, but the water rise will be measured in inches, not feet. And the Mississippi River watershed needs to see a lot more rain to bring it closer to normal levels again.

Any rise in the water level will benefit the shipping along the river, which has been significantly impacted by the historically low water levels, but the increase in water could submerge hidden artifacts once again.