Some of the most intriguing astronomy events of the entire year will unfold in the November night sky. 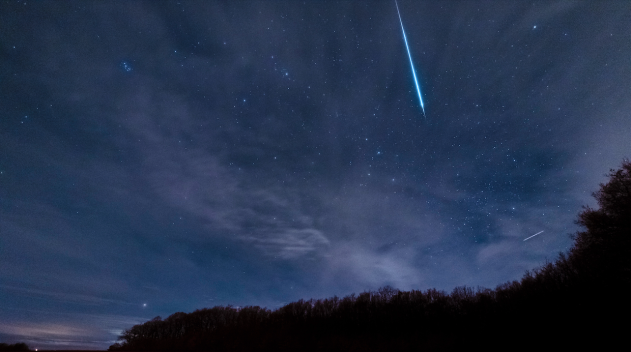 Some of the most intriguing astronomy events of the entire year will unfold in the November night sky, giving stargazers plenty to look for after the sun has set.

November could be the best month of 2022 for spotting shooting stars, as three meteor showers will culminate throughout the month. And all three could exceed expectations when compared to recent years.

A hat, heavy coat and a blanket will all come in handy as the late-autumn chill makes for shivering sky watching conditions across most of the United States this month, especially across the northern tier where snow has already made an appearance on several occasions.

From shooting stars to the alignment of the sun, Earth and moon, here are the top astronomy events to look for throughout November:

A pair of long-running meteor showers will reach their apex during the first two weeks of the month, sparking incredibly bright meteors that could light up the entire sky.

The Southern Taurids and Northern Taurids both peak during the first half of November, but rather than peaking on one night, they both have plateau-like peaks that last for around two weeks. They typically join forces to produce between five and ten meteors per hour, according to the American Meteor Society (AMS), but this year’s events may outperform normal expectations.

A “swarm” of fireballs could make this year’s Taurids a must-see event. If that occurs, it would be the first time since 2015 that the Taurids have unleashed a flurry of fireballs. Fireballs are significantly brighter than average shooting stars and can stand out when they appear next to a full moon, glowing for a few seconds before burning out.

Since the peak of the Taurids is spread out, skywatchers hoping to see an awe-inducing fireball can check the AccuWeather app and plan for a night of stargazing when cloud-free weather is in the forecast.

The pair of meteor showers are active all night long, with meteors from both events originating from the same region of the sky as the constellation Taurus. Still, some patience is required as fireballs might not occur as frequently as ordinary meteors.

One of the biggest astronomy events of 2022 will take place in the early morning sky on Tuesday, Nov. 8, as the sun, Earth and moon align to create a total lunar eclipse.

No special equipment like a telescope is needed to view a lunar eclipse, although partly to mainly clear weather conditions are a necessity. Since the eclipse is a long-duration event, only a few breaks in the clouds are needed to catch a glimpse of the event.

As the moon passes through Earth’s shadow, it will gradually change color to appear rusty orange or dark red in the sky. The colorful transformation is why some refer to a total lunar eclipse as a Blood Moon. November’s full moon is also known as a Beaver Moon.

The entire eclipse will last for nearly six hours, but the total phase of the eclipse, when the moon appears orange or red, will last for only a little over an hour, starting at 5:16 a.m. EST and ending at 6:41 a.m. EST. The eclipse will near its conclusion while the moon is setting in the eastern sky along the East Coast.

After November, the next total lunar eclipse will not occur until March 13, 2025, an event that will also be visible across North America.

Like the Taurid meteor showers that will kick off November in grand fashion, this year’s Leonid meteor shower, which peaks on the night of Thursday, Nov. 17, into the early hours of Friday, Nov. 18, could outperform typical expectations.

During an average year, the Leonids feature approximately 15 meteors per hour, or around what was observed during the peak of the Orionids in mid-October. However, the AMS explained that recent calculations by various astronomers suggest that hourly rates this year could top out between 50 and 200 meteors per hour.

If this prediction comes to fruition, it could make the Leonids the best meteor shower of 2022.

There are some uncertainties with the precise forecasts from the calculations, but all signs are pointing toward this year’s edition of the Leonids exceeding what has been observed in recent years.

The AMS added that the Leonids are often bright meteors and can leave behind a trail of smoke and debris known as a persistent train. A few fireballs from the waning Taurids will also be possible on peak night as they gradually taper off through the end of November.