Storm To Bring Needed Rainfall To Areas From Texas To Alabama 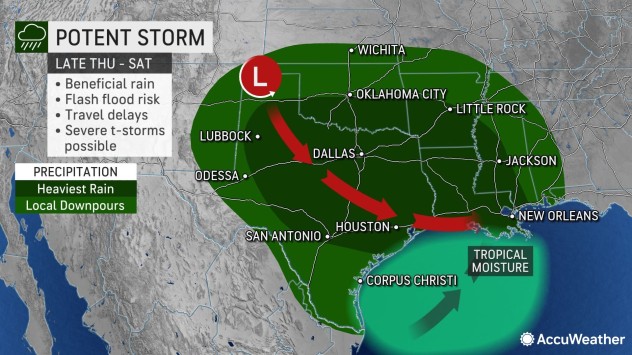 A storm that was tracking across the northwestern United States on Wednesday is poised to dip southeastward into the south-central U.S. later this week and deliver rounds of drenching rain and even some severe weather conditions, AccuWeather meteorologists say.

The storm’s most far-reaching effect will be drought-quenching rainfall, but some areas can be hit with flash flooding, and a few spots may be at risk of damaging thunderstorms.

“This storm is dropping farther south than the system that brought severe weather and drenching rain to a wide zone of the South Central states earlier this week,” AccuWeather Storm Warning Meteorologist Joe Bauer said. “Because of this, both severe weather and rain will be more consolidated to the south, when compared to the storm from Monday and Tuesday.”

Perhaps the most widespread day for gusty to severe thunderstorm activity will be from late Thursday afternoon to Thursday night. It’s during this time, that meteorologists will be focused on western and central portions of Texas and Oklahoma for storms to erupt. This would occur just as the storm begins to move out of the Rockies and onto the southern High Plains.

The main threats from the storms are likely to be incidents of strong wind gusts and highly localized incidents of hail and flash flooding.

As the storm continues its southeastward trek, the greatest risk of severe thunderstorms is likely to converge along the Gulf Coast and Interstate 10 corridor from eastern Texas to the Florida Panhandle spanning Friday to Sunday.

In this zone, severe weather may be sparse, but a few storms capable of producing flash flooding and high winds, and a tornado or even a waterspout cannot be ruled out.

The most far-reaching impact from the storm system beyond Thursday night will be a soaking rain.

A general 1-2 inches of rain is likely to fall, with local amounts between 2 and 4 inches forecast from central Texas and Oklahoma to central and southern Alabama and the western part of the Florida Panhandle.

While the rain is greatly needed in the region, flooding problems are likely in urban areas, forecasters say.

The bulk of the heavy rain will fall on the Dallas, Houston, Austin and San Antonio metro areas on Friday. Most of the rain could hold off in New Orleans until Friday night and may not reach Birmingham, Alabama, until Saturday night. It is possible that rain stays away from Atlanta until Sunday.

“Rainfall will tail off substantially from the storm farther north due to a wedge of dry air, and it is possible that very little to no rain falls on much of Kansas and Missouri,” AccuWeather Senior Long-Range Meteorologist Joe Lundberg said. “Since the bulk of the rain from the storm will fall so far south, it is not expected to be of any significant help to shipping on the Mississippi River.”

“Some rain will pivot northward into portions of Tennessee this weekend and even into part of the Ohio Valley by early next week, but likely not enough rain will fall to have any big impact on Mississippi River levels,” Lundberg said.

The Ohio River is the largest tributary to the Mississippi.

AccuWeather’s long-range forecasting team has been emphasizing that the anticipated weather pattern into at least the first part of the winter does not bode well for rainfall in the Central states and for any significant boost in low water levels on the Mississippi.