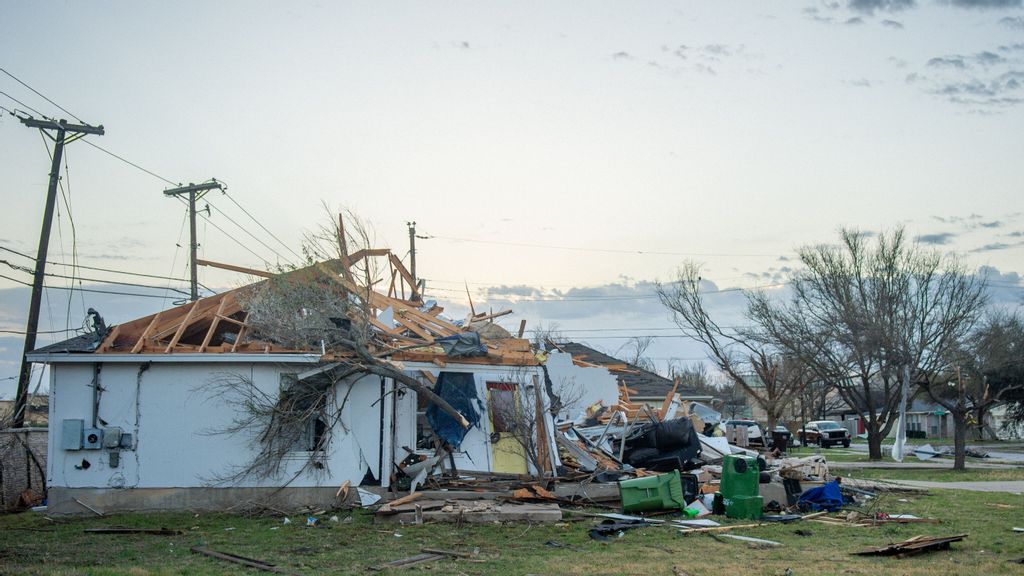 A tornado-damaged home is seen in Round Rock, Texas on March 22, 2022. A series of tornadoes touched down in multiple cities throughout Texas, causing widespread damage. PHOTO BY BRANDON BELL VIA GETTY IMAGES

A line of severe weather, fueled by a fast-moving cold front, triggered numerous severe thunderstorms and tornado warnings Monday night across east-central Texas. Tractor-trailers and cars were flipped, roof damage to buildings was reported and thousands were left without power.

An 18-wheeler was overturned and cars were in a ditch along Interstate 35 after a possible tornado moved through east-central Texas Monday night, according to local law enforcement. The incident occurred just south of Jarrell, Texas, located about 40 miles north of Austin, Texas.

A tornado warning was issued just before 9 p.m. local time as strong circulation was observed in one of the thunderstorms. The National Weather Service (NWS) warned people to stay off Interstate 35 in northern Williamson County as the storm approached the interstate.

The reported tornado started just west of I-35 south of Jarrell and was on the ground for several miles, according to FOX 7 Austin. The potentially tornadic storm also crossed near the KGRK weather radar site, which likely sustained a power outage as a result of the storm.

The NWS office in Austin/San Antonio region said forecasters will be conducting a storm survey Tuesday to further investigate the damage from Monday night and assign a rating to the possible twister.

Garrett Patton, a Williamson County resident, described the tornado that rampaged through Jarrell as “wicked and fast.”

“We weren’t ready for it at all,” Patton told AccuWeather National Reporter Bill Wadell in an interview. “There were a lot of people out on the roads…Semis got turned over just right up the road.”

While tornadoes are not uncommon in Jarrell, they typically occur during the spring months. Just this past May, many residents came together to mark the 25th anniversary of the deadly Jarrell tornado that claimed the lives of 27 people on May 27, 1997.

According to the NWS, a widespread severe weather episode unfolded across parts of central Texas during the afternoon and evening hours, which fueled one of the “most powerful tornadoes on record.” The F5 tornado that tore through Jarrell went down in history as it ripped up the pavement from the roads and pulverized homes and other buildings.

“I guarantee this whole town went berserk when that warning got issued, and I hope we don’t ever have to see another one, but it is Texas,” Patton said. “We’ve got some crazy weather.”

Other locations in and around Jarrell received substantial straight-line winds that turned damaging in some instances.

According to WXAN, the garage doors to a fire station were sheared off by the intense winds. Nearly 150,000 customers were without power before the sun rose Tuesday, according to PowerOutage.US, but 9 a.m. local time, power was restored to more than half of those who lost electricity.

Elsewhere in the Lone Star State, impacts didn’t come in the form of wind, but torrential rain and flooding. While Monday’s storms moved quickly through the region, they contained extremely heavy rain, allowing totals to rapidly reach impactful levels. The Dallas-Fort Worth Metroplex had some of the highest totals, with more than 4 inches reported in a few spots.

With rain falling at such a fast speed, drainage systems were unable to keep up, and street flooding resulted. The rainfall wasn’t as intense as what occurred back In August, when over a foot of rain fell in parts of the area, but it was still enough to cause issues.