Many residents were perplexed when they woke up to blocked windows and yards blanketed in tumbleweeds. 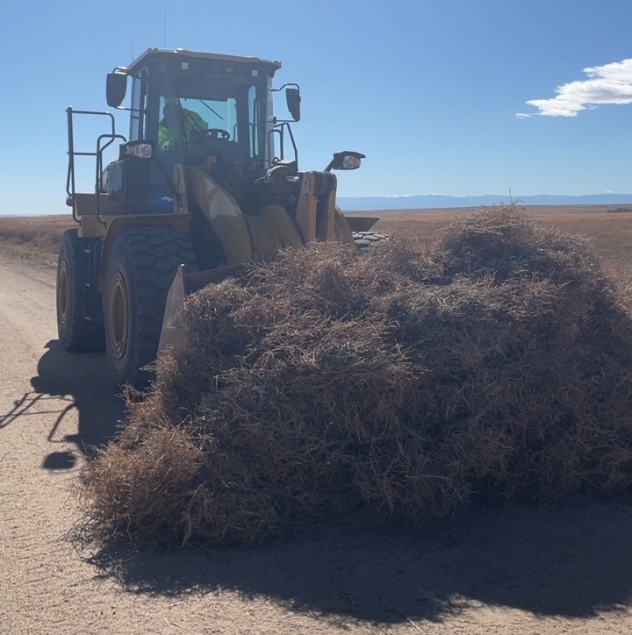 Tumbleweeds buried people’s homes and vehicles over the weekend after strong winds swept through southern Colorado. Homeowners woke up Sunday morning to blocked windows and yards blanketed with tumbleweeds, which left many residents questioning what to do.

Just south of the Colorado Spring Airport in Fountain, Colorado, Marlies Gross and her husband woke up to tumbleweeds engulfing their home on Sunday morning. Almost every exit from their house, including windows and doors, were blocked by an overwhelming amount of tumbleweeds.

“The tumbleweeds were all the way up to the door, up to the ceiling,” Gross said to AccuWeather. “We had no way to get out of the house except through the garage, but the driveway was totally blocked with a huge wall of tumbleweeds. To the left, to the right, everywhere.”

Gross got into her car and started to drive out of the garage, down the driveway and into the road — something she said she would never do again. The “10-foot high tumbleweeds” completely covered her SUV and distorted her orientation while she was driving.

After deciding to get out of her car, Gross took small steps hoping to make it back to her house. The homeowner association president then spotted Gross and helped her back to her home.

“He gave me his sweatshirt to box our way through the tumbleweeds. He’s six-foot-two, at least, and he just kind of led the way for me,” Gross explained.

A small passageway from the road to the front door was cleared on Wednesday, but there is still an “ocean of tumbleweeds” in Gross’s yard, she said.

Gross and her husband contacted the insurance company and the local fire and police departments about removing the tumbleweeds. They all explained that it is the Gross’s responsibility to remove the tumbleweeds from their yard — despite being a fire danger.

“The thing is, we have so many fires here, and we have a drought and those tumbleweeds, they would just go up and explode into flames all over, and we probably would go with it,” Gross said. “We would not even have a chance to get out.”

According to the latest report from the U.S. Drought Monitor, the bulk of southeastern Colorado is experiencing “abnormally dry” conditions, with some areas under a moderate to severe drought.

After contacting different landscaping businesses, Gross and her husband have hired one to come to remove the tumbleweeds — but it comes at a price. According to Gross, one company gave them an $8,000 estimate, while another gave them a $6,500 estimate for the removal.

“That’s a lot of money to have to pay for something, you know that you couldn’t help,” Gross said. “You just have to have it removed.”

The Grosses weren’t the only ones who woke up to tumbleweeds blanketing their yard. Ian Barnes, who lives just north of Fountain in Security-Widefield, told CBS affiliate KKTV that his front yard and car were buried in tumbleweeds when he woke up on Sunday.

“I looked out my backyard, it didn’t seem so bad,” Barnes said to KKTV’s reporter Lauren Watson. “Then I went out [to] the front yard, and it was pretty crazy.”

Muscling through the prickly tumbleweeds in his driveway, Barnes reached the street. When he turned around to look at his property, a daunting sight awaited — a sea of tumbleweeds stood between him and his front door. They even covered his entire truck, which was barely visible in a video that Watson shared on Twitter.

With help from neighbors, Barnes slowly raked a path back to his front door. Barnes told Watson that his neighborhood is “no stranger to wind damage,” but he did not expect his yard to be littered with tumbleweeds when he woke up.

According to the National Weather Service (NWS) office in Pueblo, Colorado, strong wind gusts were recorded throughout the region over the weekend. On Saturday, a high wind warning was in place across southeastern Colorado. By Sunday afternoon, numerous stations across the region had recorded wind gusts greater than 50 mph.

This isn’t the first time an area in the West has been overrun by tumbleweeds due to dry and windy conditions in this part of the country. Back in April, a town south of Salt Lake City dealt with a similar invasion of tumbleweeds.