Actor Josef Cannon appears in Paul’s Promise, a Christian biopic that releases in theaters on October 21. 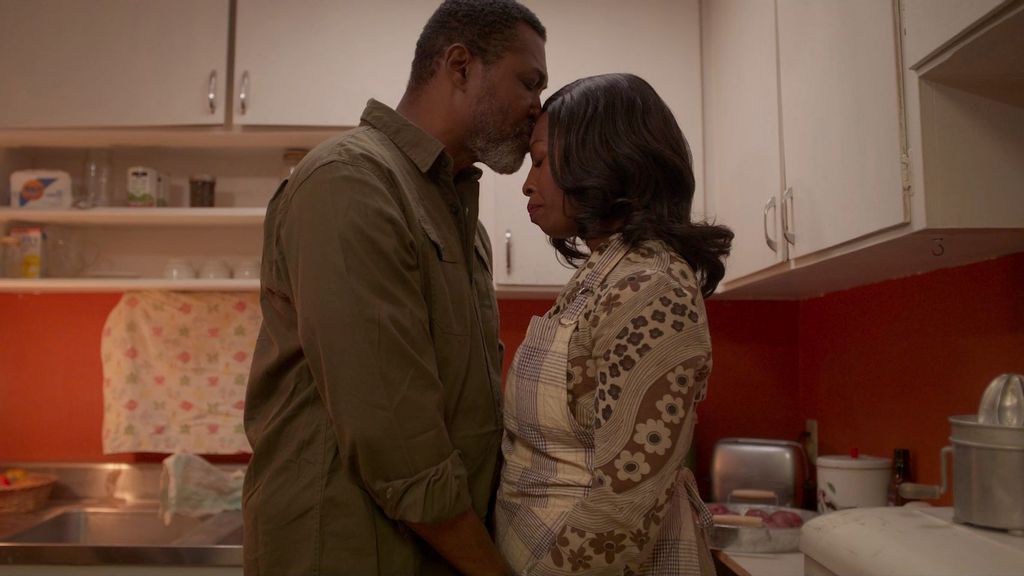 Josef Cannon as Jimmy Lipkin with his wife in Paul's Promise. (Paulspromisemovie.com)

Starring in an independent film is a dream for many African Americans, but Josef Cannon thought that his status as a first-grade schoolteacher with a speech impediment would keep him from the big screen. But an unlikely series of events and his own perseverance led to Cannon turning his original writing role into an acting job for a Civil Rights-era film.

Cannon is an unlikely schoolteacher-turned-actor who overcame a speech impediment to get started in Hollywood. While working as a first-grade teacher at St. Aloysius Catholic School, Cannon taught the children of actors Damon Wayans and Mario Van Peebles, who encouraged Cannon to get into acting.

“I had a severe speech impediment as a child, it was something I dealt with through college. Growing up I always wanted to be an actor but because of my speech impediment, I didn’t think I could do so. It wasn’t until I started working as a school teacher that I began to get comfortable speaking in public and work my way around those issues,” said Cannon.

The Chicago-born actor, writer, and director got his first acting role in 1986 in Wildcats, a film about a high school football coach, played by Goldie Hawn, who takes her coaching talents to the inner-city.

Cannon snagged roles in big TV franchises through the 80s and 90s, including Star Trek: The Next Generation and CSI. He went on to act in multiple TV movies, including Lackawanna Blues, Burned, and The Canals.

Cannon’s burgeoning acting career was put on hold when his ex-wife Catherine kidnapped their 4-year-old daughter Shelby in 1998 while on a trip to Ireland to visit her family. Cannon’s daughter was found six years after the abduction when a woman recognized a photo of Shelby in a magazine as her son’s schoolmate in England. Cannon later produced a documentary chronicling the experience, and Catherine is still wanted in Ireland for parental kidnapping.

Cannon, a Christian, credits the strength of his faith in his perseverance through the abduction of his daughter and the unpredictability of a career in acting. Now, Cannon has taken on a more niche part of the Hollywood machine: the Christian movie genre.

In his upcoming film, Paul’s Promise, Cannon is able to outwardly express his strong faith through his character Jimmy Lipkin, the estranged childhood friend of a small town pastor.

“Paul’s Promise” is an upcoming biopic about Paul Holderfield, Sr., a racist ex-firefighter-turned-pastor at the height of the 1960s civil rights movement. The film is set in North Little Rock, Arkansas, a city joined by a concrete bridge with bigger Little Rock, where President Eisenhower had to send in the 101st Airborne to escort an 8-year-old black girl into the newly integrated Central High School.

“My journey to this film is quite different from most actors. I’m also a writer, that’s one of my other strengths, so when they were putting together this film, they noticed that the Jimmy character was not as fleshed out as they wanted it to be. They wanted to have a black voice, they wanted someone who can remain faithful to the time and speak to it as a black male.”

Cannon worked with veteran actors, including Dean Cain and Linda Purl, on Paul’s Promise, film based on a true story. Yet Cannon says that receiving feedback directly from the family of Paul Holderfield was the most special part of the experience.

“Paul Holderfield, Jr. is actually in the movie and when I got to talk with the family, Holderfield Sr’s grandkids, they told me that they had never seen their grandfather [portrayed] on screen. That hit very close to me,” said Cannon.

The film stars Ryan O’Quinn as Paul Holderfield, a firefighter in North Little Rock, Arkansas during the 1960s. When his mother is diagnosed with terminal cancer and is told she has a week left to live, she begs her son to attend church and pray. Holderfield was portrayed as a smoker and drinker who wasn’t one to usually attend church services. But the pain of seeing his mother in her last days, along with an unlikely incident that reunites him with an estranged childhood friend, inspires Holderfield otherwise.

Cannon plays the role of Jimmy Lipkin, Holderfield’s African-American childhood friend who has since become estranged due to ongoing racial tensions in the 1960s South. Lipkin plays a pivotal role in Holderfield’s rededication to the Christian faith, eventually leading to Holderfield creating one of the first integrated churches in the South.

Cannon wasn’t originally set to have an acting role in the film at all, but the creators were so impressed with his insight during his initial job as a writing consultant for the character of Jimmy that they gave him the part.

“I was initially brought in to be a writer and I met with the producers to have what was supposed to be a 15-minute meeting, and it turned out to be 3 hours,” said Cannon. “I was showing them the character of Jimmy and how the character would come across, I left a meeting giving my writing advice, and later I got a phone call while I’m in Lithuania working on the other film, and they were telling me that they are considering me for one of the leads.”

Cannon was taken aback by the call, even wondering if the producers had made a mistake in considering him. So he called his mother, the person who first turned his aspirations to the movie business.

“God doesn’t make mistakes,” said Cannon’s mother to him while he was contemplating the unexpected role. Cannon called the producers back to accept.

Paul’s Promise was filmed in the town of Truth Or Consequences, New Mexico, and produced by Damascus Road Productions, a Los-Angeles based media company that focuses on faith-based entertainment. The movie recently premiered in Los Angeles along with smaller screenings in Virginia, Tennessee, New Mexico, and Arkansas.

Although the Covid outbreak of 2020 shut down major film and television productions, Cannon took the opportunity to go after smaller, more intimate productions like Paul’s Promise.

“It’s a definite blessing. Outside of the health risks and other factors that have come with the outbreak, this time has been very good for me. I’ve been able to work on films, and I’ve gotten roles that probably wouldn’t have come to me otherwise.”

Instead of dealing with a large cast and crew on bigger projects, Cannon had the opportunity to work closely with his a small group of co-stars and crew on Paul’s Promise.

“It’s easier to have cohesion because we don’t have as many people on set and I have found that this helps the quality of the films such as ‘Paul’s Promise’, which was one of the first films to shoot post-Covid.”

Cannon has an appreciation for small-budget roles because the time constraints force him to act efficiently.

“I always tell actors, especially of younger age, never lose sight of the 8-year-old inside of you. What I mean is the eight-year-old doesn’t overthink things. When you’re dealing with bigger productions, you are always overthinking things. But when you’re dealing with a smaller budget production there is no time, room, or money to overthink. You have to trust your instincts, your gut because you may not have many opportunities to do otherwise.”

Along with writing and acting, Cannon also owns a production company called CannonVision Productions, where he has written and directed a series of independent movies. Cannon wrote, directed, and played the fictional role of a retired baseball player training to become the first African-American to qualify for the Tour de France in his production company’s 2015 film Feeling Goode.

“You have to have an unrelenting faith in your craft and in your dream, You simply have to be steadfast and do what you want to do. You have to surround yourself with people who are your champions, my grandparents and my mother were my rock, And I am blessed that I have people who truly have my back,” said Cannon.

Paul’s Promise opened in theaters across the country on October 21.